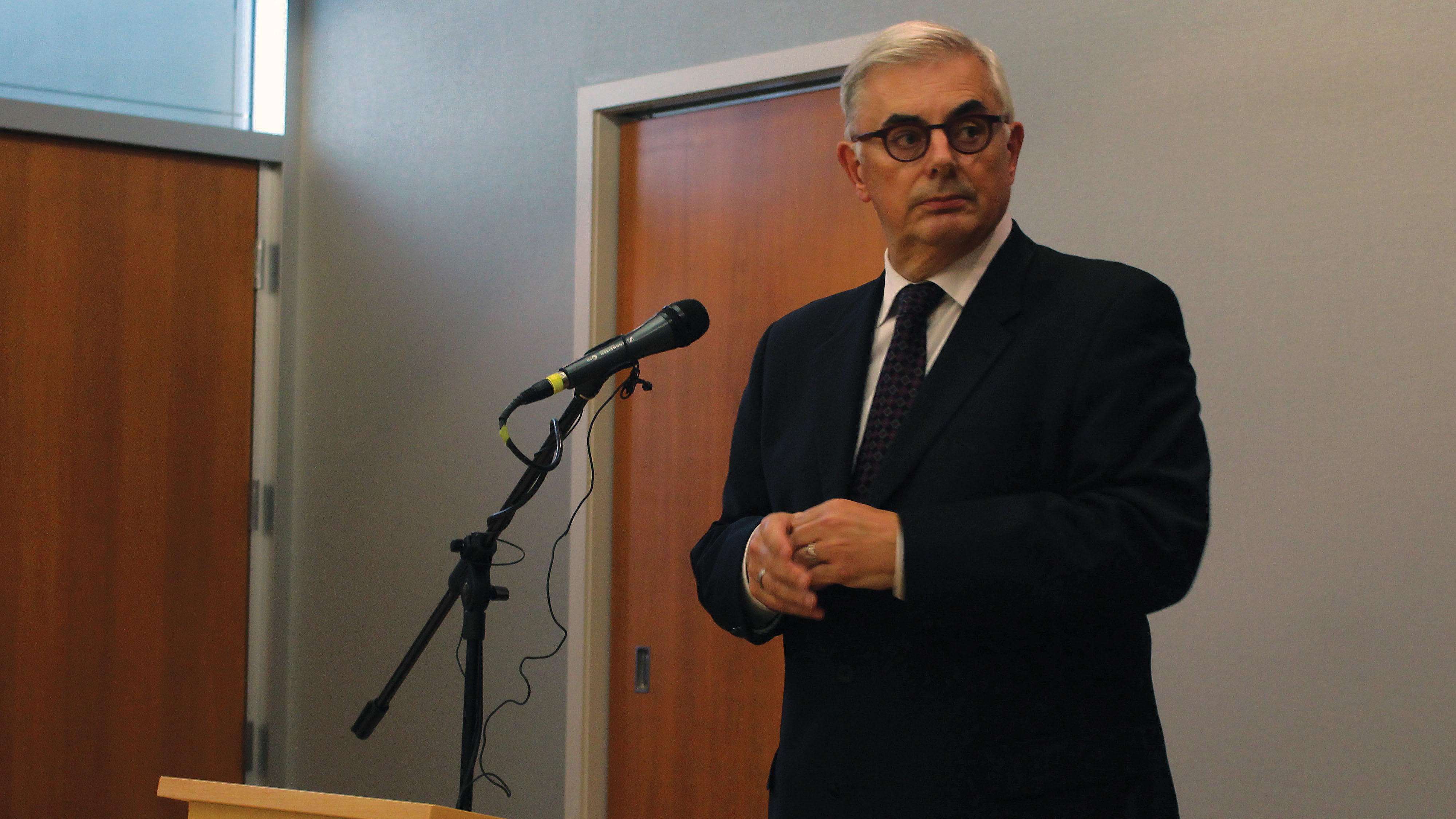 As the U of M re-opens for a new year the door closes on 2018 — and with it, we inevitably reminisce on a year filled with progress, protest and struggle.

In the spirit of looking back, here is a rundown of some of the biggest stories on campus this past year.

1. U of M president apologizes to students amidst a windfall of sexual violence complaints against faculty

On the first day of the 2018-19 school year, U of M president David Barnard held a media conference and apologized to students affected by sexual violence on campus.

The apology, and ensuing confirmation that there were five open investigations against faculty, came after a slew of sexual violence complaints against U of M faculty, and shortly before another would come to light.

Kirby left the university in June 2017 after being on leave for six months, but reports claim the U of M was approached with complaints regarding the well-known instructor as early as 2012.

The U of M administration faced criticism after Kirby was hired at Boston-based Berklee College after it had received what some called a positive recommendation from the U of M.

In August, oncologist and former associate dean at the faculty of medicine Gary Allan Joseph Harding was convicted of professional misconduct and stripped of his medical licence after he allegedly made repeated sexual advances toward two students.

More recently, U of M professor and director of the Richardson Centre for Functional Foods and Nutraceuticals Peter Jones was placed on leave when it was revealed he had been accused of misconduct, including inappropriate student relationships.

Barnard indirectly referenced the allegations again in his year-end message on Dec. 19, where he said issues of sexual violence on campus “have not always been dealt with as effectively as they could have been.”

He said he had met with the university’s board of governors the week prior to present several initiatives to address these issues.

UMSU has since called for university policy banning sexual relationships between faculty and students “whom they have a direct power imbalance over.”

2. Campus community pushes back against hate

As part of a racist campaign orchestrated by alt-right groups across North America, the U of M campus was papered with posters with the phrase “It’s Okay to Be White” overnight on Halloween.

Members of the anonymous message board 4chan developed the phrase in 2017 with the purpose of creating a slogan that would be, as one commenter put it, “linguistically harder to subvert.”

The posters were mainly concentrated in the faculty of arts, including the Isbister, Fletcher Argue and Tier buildings. Similar posters were found on university campuses across Canada.

Barnard released a statement a day after the posters were first discovered condemning the act and called upon students, staff and faculty to “fight back against ignorance with knowledge.”

Members of the School of Fine Arts Students Association (SOFA) led a poster initiative of their own, gifting posters reading “My love for my people is stronger than anyone’s hate” and “Reclaim your power” to members of the Muslim Student Association and the U of M Indigenous Students’ Association (UMISA).

A statement made by the Circle of First Nations, Métis and Inuit Students — a group operating within the Canadian Federation of Students — condemned the U of M community for what it called “blatant disrespect for the safety and security of Indigenous students” in October.

The statement said the now-former vice-provost Indigenous engagement Lynn Lavallée requested and was denied a meeting with the U of M’s presidential executive team on behalf of UMISA to discuss instances of anti-Indigenous racism on campus.

At the time, U of M spokesperson John Danakas would neither confirm nor deny whether the presidential executive team actually turned Lavallée away. Lavallée resigned from the position in December, citing a wider lack of response from the administration on Indigenous issues.

Earlier in the year, UMSU published a public apology after a student was allowed into the Hub Halloween Haunt wearing a costume that had been criticized as culturally appropriative.

In November, UMISA members presented a statement at an UMSU board meeting that included the demand that UMSU president Jakob Sanderson step down from his position, referring to “utter disregard and disrespect for Indigenous students.”

Sanderson said he has no plans to step down.

Students took full advantage of their constitutional right to demonstrate on campus this year, and the UMSU executive took notice.

Following pro-life campaigns on campus by the Canadian Centre for Bio-ethical Reform (CCBR) in October that included graphic imagery, students engaged in peaceful protest against the group, some carrying signs with statements including “bodily autonomy is not up for debate” and “it is okay to have an abortion.”

Sanderson said the motions would prohibit UMSU student groups from “harassing students who don’t want to be talked to — this would include uses of graphic materials or imagery, often pictures or models of aborted fetuses, which create an unsafe environment for students.”

Earlier in the year, UMSU reportedly confiscated materials from student group Culture for Life after students complained about the content it was presenting while tabling. It was later determined the group had violated UMSU’s safe environment policy and its table booking was revoked.

5. Students vote to remain in Canadian Federation of Students

After a non-binding plebiscite motion was introduced and passed in November 2017 — and only a month before the UMSU executive voted to amend the UMSU Act to require the union to regularly confirm membership in external organizations — students voted to continue membership within the Canadian Federation of Students in February 2018.

After voting closed, 3,877 votes had been cast, with 64.6 per cent in favour of remaining with the federation.

The plebiscite came in the midst of a tense relationship between UMSU and the federation that continues today.

In July 2016, UMSU agreed to pay $993,562.18 in outstanding fees to the Canadian Federation of Students following a dispute with the federation regarding ownership of the UMSU domain name.

In December 2016, then-UMSU president Tanjit Nagra demanded an apology from the federation, citing verbal harassment from its executive members.

Following the vote, Nagra said regardless of the outcome, she was happy to see students turn out and express their opinions in a “democratic way of expressing their feelings.”

6. UMSU board votes against affirming membership with Canadian Federation of Students

Just eight months later, the UMSU board voted to not affirm membership with the Canadian Federation of Students at an emergency meeting.

The vote, which allows the board to begin the process toward defederation, came after a recommendation from UMSU president Jakob Sanderson that the board remove itself from the federation.

Sanderson, who did not campaign on leaving the federation when running for executive council and voted to remain in February’s plebiscite, said he was only made fully aware of the state of the relationship between the federation and UMSU when he was placed in an executive role.

Sanderson cited cost as a deciding factor in recommending the board vote against affirming membership. While the Canadian Federation of Students costs $341,000 annually for membership, the Canadian Alliance of Student Associations (CASA) — a similar organization Sanderson recommended the union join — costs $50,000 for yearly membership.

However, critics argue the federation offers access to resources CASA does not.

The next step in the process is collecting signatures from students in support of the referendum.

For the petition to be valid for review, 15 per cent of the student body must sign, or approximately 3,400 students.

After students protested a $64 increase on tuition fees without a referendum in the 2015-2016 school year, last February saw the then-UMSU executive vote to amend the UMSU Act to require the union to put any increase to tuition fees to a student vote via referendum.

The act now requires a majority approval vote from students for any proposed increase in union fees to move forward, exempting inflation costs.

The provincial legislation had only been amended once before in its 43-year history, when it was made bilingual in 1990.

Along with this amendment, the UMSU Act was also made gender-neutral, and introduced a new mandate that would prove significant to the current UMSU executive wherein the board is required to vote to affirm membership with any external organizations, including the Canadian Federation of Students.

8. Recreational cannabis legalized — but not on campus

Following cannabis legalization in Canada, students living on campus residences received a list of restrictions and consequences should they choose to partake.

An email sent out to students living in residence threatened special punishments should they be caught preparing, selling, growing or consuming cannabis in their dormitories.

Students caught breaking these rules in residence will be fined a minimum of $50 for a first-time offence.

The email also warned students that should they present a “delayed response” to opening their door or smelled of marijuana, it would “raise suspicion” of the student and consequences would be more severe.

In accordance with the provincial Non-Smokers Health Protection and Vapour Products Act, smoking marijuana on school grounds is prohibited.

Winnipeg Transit requested to begin negotiations with UMSU over the U-Pass contract, which expires in May 2019, in the fall.

The program rolled out in September 2016 following two 2014 referendums where UMSU members and University of Manitoba Graduate Students’ Association members both voted in favour of the mandatory pass for full-time students.

UMSU’s requests at the bargaining table will include a wider range of opt-out eligibility for students and additional routes and buses throughout the city.

Sanderson has said Winnipeg Transit told UMSU there would be more buses made available to match the influx of student riders in the original negotiations but did not hold up its end of the bargain.

According to the present contract, there is a roll-out option should negotiations not be completed in time that would allow the current contract to extend for another year.

10. Tuition increases, and students fight back

Both undergraduate and graduate students were hit with a 6.6 per cent — the maximum percentage allowable — increase to tuition fees in September.

There had been a cap on tuition fee increases in place since 2012, but it was lifted after the provincial government passed Bill 31 in November 2017.

At the time, provost and vice-president academic Janice Ristock referred to the millions distributed annually by the university to students through bursaries and scholarships as a method taken by the U of M to keep education affordable.

International students felt the brunt of the hikes and slashes in 2018.

It was announced in March that along with the tuition increase, Manitoba would become the first province in Western Canada to scrap its universal healthcare program for international students.

A handful of students protested the tuition hikes — along with cuts to international student healthcare — by staging a sit-in in Barnard’s office in April, shortly after they were first announced.

Members of the U of M’s Revolutionary Student Movement (RSM) chapter entered the office and refused to leave.

The RSM’s demands included the reversal of the tuition fee increase and that the provincial government no longer be “complicit” in healthcare cuts.