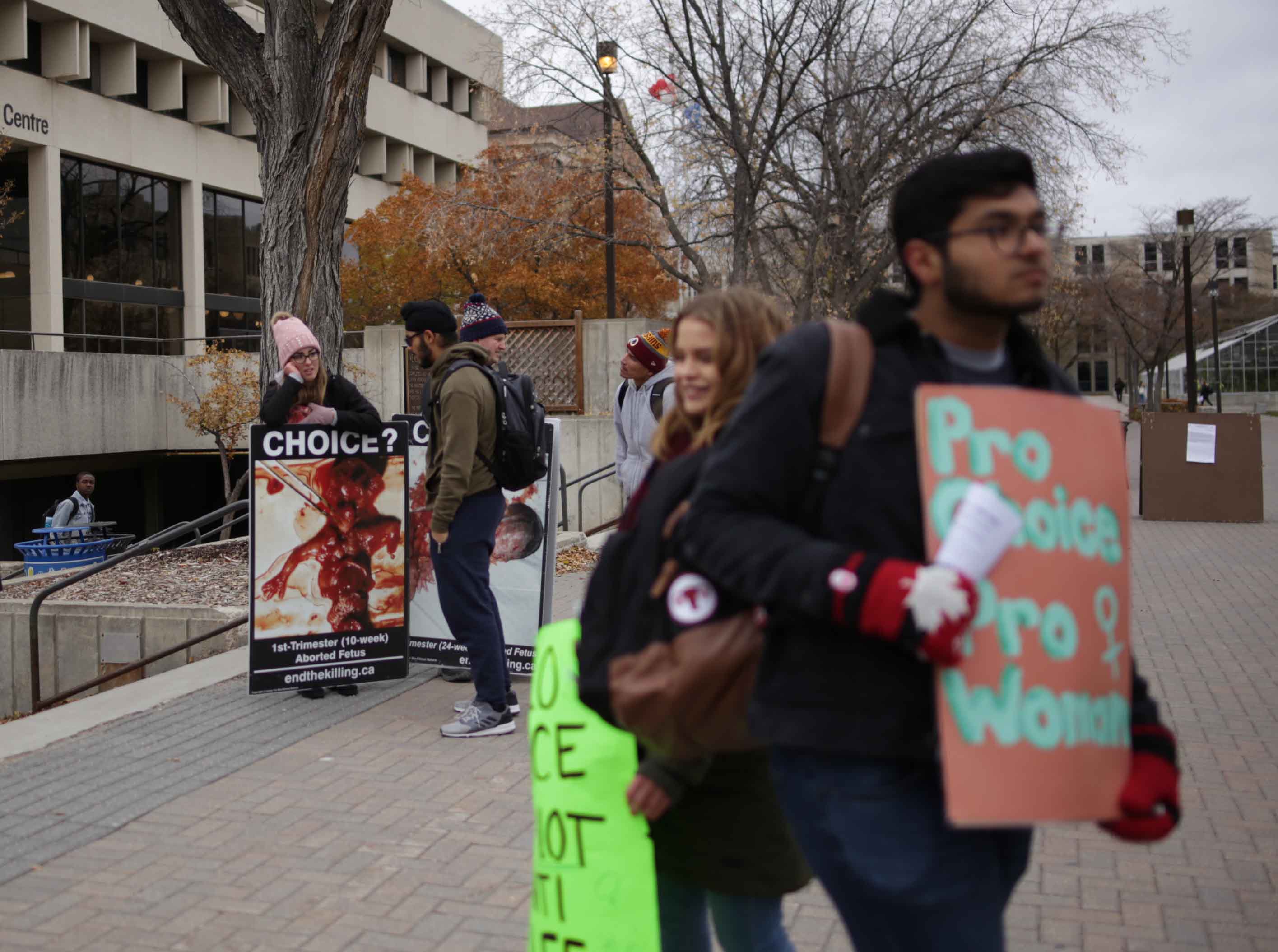 The protestors, many of whom were part of the U of M Student Action Network (UMSAN), a chapter of the Revolutionary Student Movement (RSM) — a collective of students part of a wider Canadian activist movement — held up signs with phrases including “Bodily autonomy is not up for debate” and “It is okay to have an abortion.”

The group they were protesting was campaigning on behalf of the Canadian Centre for Bio-Ethical Reform (CCBR), an anti-abortion group whose strategy is to “educate people on who the pre-born are and what abortion does to them,” according a statement on its website.

“We’re seeking to raise awareness among students about this injustice,” he said.

Coffey said there were “a few” pro-life CCBR students actively campaigning on campus.

There were four to five CCBR campaigners outside of UC carrying signage and handing out literature on Tuesday. Between six to 10 RSM protestors handed out pro-choice pamphlets.

ASBC student body council women’s representative Shannon Furness, who was part of the RSM’s protest, argued the CCBR’s imagery being publicly viewable on campus could be traumatizing to students.

“The demographic that most gets abortions is 18 to 24, so they’re here for a reason,” she said.

“And regardless of if they’re actually directly restricting our reproductive rights — which they’re not at this point — it still can impact a woman’s right to choose. It can make them feel victimized, vulnerable or ashamed about if they were to have an abortion, if they have gotten one, and if they have gotten one it can be tremendously re-victimizing. And I don’t think anyone deserves that whatsoever.”

“The images themselves are not traumatizing,” he said.

“They bring up a past trauma.”

U of M security became involved and asked RSM to separate itself from the CCBR and not block their signs. The security services officer told RSM protestors they could stand “in line” with CCBR, or behind them.

While security refused to speak to the Manitoban, it was mentioned in a discussion between security and RSM that it was believed by security CCBR had filed the proper paperwork to campaign on university property, and RSM had not.

RSM member Elizabeth McMehan said while there was an issue with U of M security receiving the group’s paperwork, students had a constitutional right to demonstrate on campus, and would continue to do so.

The U of M also set up signs outside of University Centre advising students that graphic content would be on display in the area.

The two university signs, wooden boards with legal-sized paper attached, expressed the U of M’s desire to “promote a community which embraces the free exchange of ideas, freedom of expression and academic freedom,” and told students to direct any questions or concerns to the U of M human rights and conflict management officer Jackie Gruber.

McMehan said the U of M administration needed to be more involved in the discussion occurring on campus surrounding reproductive health.

“I would also think it’s important that the university make a statement about whether or not they’re going to support a student’s right to bodily autonomy, and their right to make decisions about their own reproductive health,” she said.

UMSAN secretary Meredith Harley added that she believed the U of M was taking a stance in support of groups like CCBR, rather than being unbiased, by allowing them to campaign on campus.

“Just allowing them to propagate this kind of stuff is letting them have a platform, and that’s enough of a stance for me,” Harley said.

UMSAN is planning to put together an initiative reaching out to U of M student groups to build a “collective presence” on campus in support of promoting progressive reproductive health practices.

McMehan stressed the importance of both U of M administration and the student body not remaining silent on the subject.

“Right now, by not saying anything, they’ve made it very clear what their position is.”