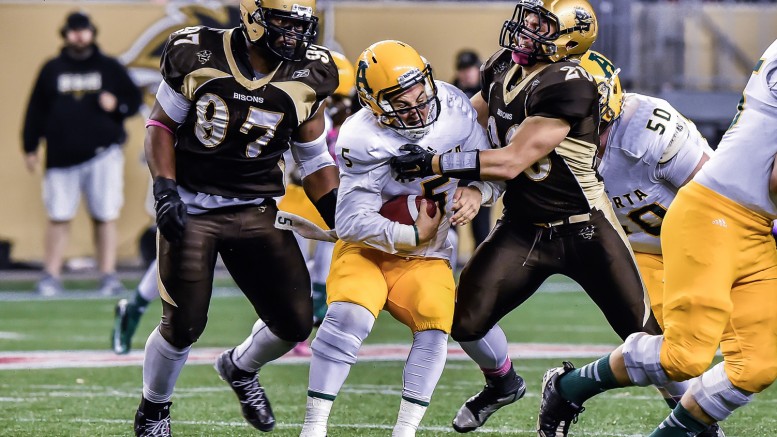 The U of M Bisons football team travelled to Edmonton, Alta. this past weekend for a bout with the  university of Alberta Golden Bears.

The Bisons were up to the task, taking the 31-17 victory, despite losing one of their coaches to cancer at the age of 29 earlier in the week.

Scott Naujoks was the receiver coach for the Bisons and was ultimately loved throughout the locker room. A win on Friday was possibly the best way to honour their coach.

The previous week’s win against the University of Regina Rams was important for getting off to a hot start on the season.

Bisons defensive back Stephen Adamopoulos chimed in on the momentum after a win.

“Last week’s win was huge to be able to start the season undefeated,” Adamopoulos said.

“We played a great game and looked to continue that great play in Edmonton. We just continued to work hard in practice throughout the week and take the momentum from last game and use it to our advantage.”

Catellier started the game for the Bisons in their first week matchup with the University of Regina Rams and performed well.

He put up 173 yards and one touchdown before going down with an injury. Quarterback Jackson Tachinski was then forced to enter the game for the Bisons.

Tachinski subsequently suited up as the starting quarterback with their battle against the University of Alberta Golden Bears. He not only played well, but well enough to win.

He threw for 180 yards, three touchdowns and one interception. A great stat line for a quarterback to come in and lead his team to a win.

This was Tachinski’s first start for the Bisons in his young university football career and he did not disappoint.

Adamopoulos praised his quarterback after the team’s victory.

“Catellier was a great player for our team and a huge part of our family here,” Adamopoulos said.

“He will be a big loss for us, but Tachinski is also a great quarterback. He has the arm strength and mobility to be a great quarterback in this league. We will be looking for him to continue to impress for us if we want to be successful the rest of the year.”

Wide receiver Gavin Cobb was also a player to watch during this game. He ended the game with 88 yards receiving and two touchdowns. He was all over the field to help spread the offence out for the Bisons.

This puts Cobb at a whopping 127 yards and two touchdowns in his two games on the season. Look for Cobb to be a big part of the Bisons’ offence for the rest of the year.

The team does not play this week, having a Thanksgiving weekend bye, but will look to continue its great play against the University of Calgary Dinos at home on Oct. 16.