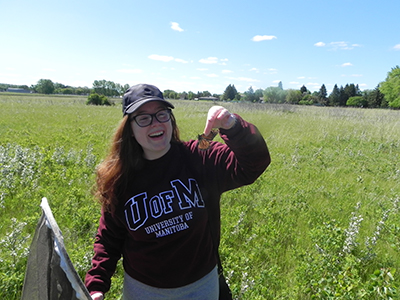 Mackenzie Alexiuk, a fourth-year student in the department of biological sciences, won the 2021 undergraduate research award (URA) to work on a project exploring the genetics of butterflies and caddisflies.

Alexiuk received an undergraduate student research award from the Natural Sciences and Engineering Research Council of Canada (NSERC) in 2020 and then a URA offered by the University of Manitoba in 2021. The back-to-back student researcher worked with the same laboratory for the duration of both awards.

The application process requires students to interview two professors and write an analysis of how working with one of them would progress their career or supplement their education.

“I didn’t do that much interviewing,” Alexiuk said.

“I sent off a couple emails, and lots of people weren’t taking students just by chance that year […] but I got to meet with two people.”

Alexiuk interviewed both Jake Stout and Jeffrey Marcus. Stout has published extensively on medicinal plants, including cannabis, while Marcus specializes in — among other things — lepidopterology.

“I picked Dr. Jeffrey Marcus who is the butterfly guy on campus.”

Marcus has conducted previous research on butterflies in high-elevation environments. The laboratory’s current project aims to see if the genetic adaptability for high elevation is similar or different in caddisflies.

“In the world of insects, you have butterflies and moths, which are really closely related. Then you have caddisflies, which are kind of like a cousin.”

According to Alexiuk, caddisflies live in different environments than butterflies. Studying caddisflies can offer different insights into how insects adapt to their habitat.

“Caddisflies live in high elevations like in the Rocky Mountains of Colorado — that’s where the samples were collected,” Alexiuk said.

In 2020, Alexiuk’s job in the lab was to go through ribosomal and mitochondrial sequences and fix the mistakes caused by inaccurate sequencing. From there, full sequences can be compared to determine relationships between organisms or species.

Alexiuk also had the opportunity to present a conference paper on high-elevation adaptation in the mitochondria of Colorado caddisflies at the 69th annual Lepidopterists’ Society Meeting.

“It was cool just to see my name on the list of presenters,” Alexiuk said.

“Typically, this conference is in person, right? So, I don’t think I’d be able to do this in a normal year […] I can be at home doing this because normally it is held in California, or it would be in North Carolina, someplace that probably an undergrad wouldn’t be going.”

The most valuable part of Alexiuk’s experience has been the research mentorship from an established researcher.

“[Marcus has] become a huge mentor for me,” Alexiuk said.

Having a mentor in academia is helping Alexiuk take the next steps toward grad school. Alexiuk is considering doing her master’s in community health sciences at the University of Manitoba’s Bannatyne campus after completing her undergraduate degree.

“What I’m really interested in and what I would eventually like to do for my career is to be a physician assistant.”

URA applications are typically due in January for placement over the summer. More information is available by contacting ura@umanitoba.ca.