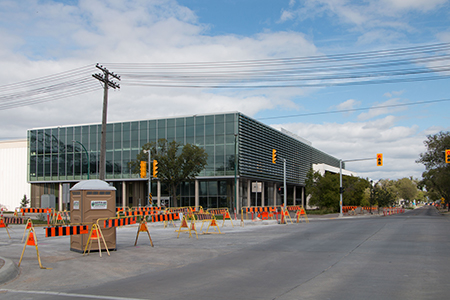 Throughout the COVID-19 pandemic, the Active Living Centre (ALC) has gone through multiple transformations. From being completely open in February 2020 to suddenly resembling a ghost town in March, then re-opening months later and eventually going through multiple openings and closures, the past year and a half has forced members of the ALC to adjust on the fly.

As August began, the U of M made the decision to prioritize the health of faculty and students, making masks mandatory for everyone on campus, including those exercising at the ALC. These restrictions were more stringent than what the provincial public health restrictions were at the time, when masks were not mandatory in many indoor public places. Cases of the Delta variant continued to rise across the country as Manitobans reaped the benefits of lighter restrictions. In late August, that changed — the danger of a fourth wave in the province became too much to ignore.

The U of M’s decision is in line with many other universities’ COVID-19 policies across the country, including other educational institutions in Manitoba.

The mask mandate was also reintroduced for all public indoor spaces. In gyms, a mask must be worn when walking around the gym, but not when working out.

The ALC continues to have much more stringent rules for its members, mandating that masks must be worn at all times in the facility, garnering mixed reactions from its fully vaccinated members.

Griffen Hawe, a student in the faculty of science, thinks it is preposterous that some individuals oppose the mask mandate, but admits that it is not ideal when working out.

“To me, it’s ridiculous that we [wouldn’t] be wearing masks when something like this is going on,” said Hawe.

“There’s almost no downside to them […] so, I don’t see why we wouldn’t wear masks. It seems like the [easiest] solution […] it’s not the end of the world.”

“However, at the gym, it is kind of an inconvenience. I think everywhere else, I understand it, but at the gym it’s such an inconvenience because you’re breathing heavy, you’re sweating and they get gross, but I do think that the mask mandate is important.”

The new vaccine guidelines have also caused controversy in the province. Hawe finds comfort in knowing that fellow gym members and classmates will be vaccinated and believes that taking the vaccine is also a no-brainer.

“I think everybody should be double vaccinated,” he said.

“I would hope that most of my classmates in the faculty of science would already have the vaccine because they understand how a vaccine works and they know that it’s perfectly safe […] so, I don’t know that too many more classmates will be getting the vaccine because of the mandate. I’m assuming that most of them would already have the vaccine, but I do take comfort in knowing that everybody has to be double vaccinated.”

For the next few weeks, athletes and gymgoers at the U of M will be subjected to slightly stricter public health rules than others.

While some may deem these rules unnecessary, there is no doubt that they will be some of the most protected by COVID-19 in the province.

Judging by the last year and a half, there is a possibility that these restrictions will tighten and loosen throughout the fall semester. The efficacy of these decisions has yet to be seen — only at the end of the academic year will we be able to judge the university’s actions.