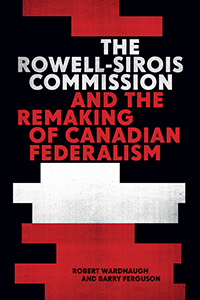 Barry Ferguson, a retired professor from the department of history, has recently co-published The Rowell-Sirois Commission and the Remaking of Canadian Federalism alongside Robert Wardhaugh of Western University. The book was published by the University of British Columbia Press as part of the C.D. Howe Series in Canadian Political History, which encourages fresh perspectives and novel analyses on all aspects of Canadian policy and history.

Ferguson was also appointed the Duff Roblin professor of government in 2014, a position which allowed him to conduct research and teach within the department of political studies. The position also allowed Ferguson to hire students to help him complete his research for the book.

“And they like political ideas, they like the nitty gritty of institutions. And so it was really a treat to teach them during the last six years of my work life.”

Ferguson and Wardhaugh’s book aims to provide readers insight into how the commission shaped Canada. The commission emerged in a time of great difficulty and petitioned the federal government to improve the quality of life for Canadians.

The Rowell-Sirois Commission, officially known as the Royal Commission on Dominion–Provincial Relations, examined the depressed Canadian economy of the 1930s and ’40s and how social and financial obligations were split between the provincial governments and federal government. The common name comes from the surnames of its two chairs, Newton Rowell and Joseph Sirois.

Ferguson explained the Canadian federal system had been effectively broken by the Great Depression.

“And what that means is the federal and provincial governments could not cooperate on measures to deal with the economic and social crisis,”Ferguson said.

“In the case of the Prairie provinces, the economic problems were actually catastrophic, so that Saskatchewan and Manitoba were — as much as the government ever could be — bankrupt […] So, there was a problem of regional crisis that was pretty serious. So, the royal commission, you know, had to deal with the fact that the federal system in Canada was an utter mess and nobody could figure out how to get out of it.”

The problem underlying the Great Depression in Canada was that the federal government had the funds to bail out the provinces, but it did not have the constitutional authority to take the reins. Per the British North America Act, the federal government was responsible for taxation of all Canadians, and the provinces could only tax their own residents and only for specific purposes.

The result was that the federal government raised significantly more money in taxes than the provinces were able to, but the provinces were responsible for the services we have come to think of as funded by taxes, such as hospitals, roads and schools.

“When you pay your taxes […] the income tax money is collected by the federal government and then doled out to the provinces. That’s what the royal commission said should be done,” Ferguson said.

However, at the time there was no agreed-upon method to transfer large sums of money from the federal government to the provinces.

“The Dominion government, as they call it — the federal government — has the money [but] it has got to share it equitably,” Ferguson said.

“[Prime Minister] R. B. Bennett rants and raves and gives a lecture to John Bracken, the premier of Manitoba, and says ‘Well, I’ll give you $20 million, but you better be a lot more responsible.’”

These financial bailouts came haphazardly, and only when the provinces were in dire circumstances. The federal government was unable to dictate what the funds were to be used for, so instead, they came with heavy political posturing. Although transfer payments existed since Confederation, the formal system of equalization payments was not adopted until 1957.

According to Ferguson, the Rowell-Sirois commission was the biggest and most influential royal commission until the Royal Commission on Aboriginal Peoples and its successor the Truth and Reconciliation Commission. The Rowell-Sirois Commission, by virtue of its contributions to institutions which we recognize as fundamentally Canadian, had an enormous impact on our fledgling nation.

Ferguson and Wardhaugh’s new book may provide insight into the next chapters of Canadian history being forged during our current economic downturn.

“I do wonder about the long-term consequences of the massive deficit financing that the federal government and the provinces are engaged in,” Ferguson said.

“The big thing that I worry about [that] nobody cares about, except maybe the one writer in current politics […] Andrew Coyne of the Globe and Mail is saying, you know, there’s an awful lot of federal government activity and they’re not listening that closely to the provinces.

“And that’s exactly the kind of situation that had existed in the 1930s.”