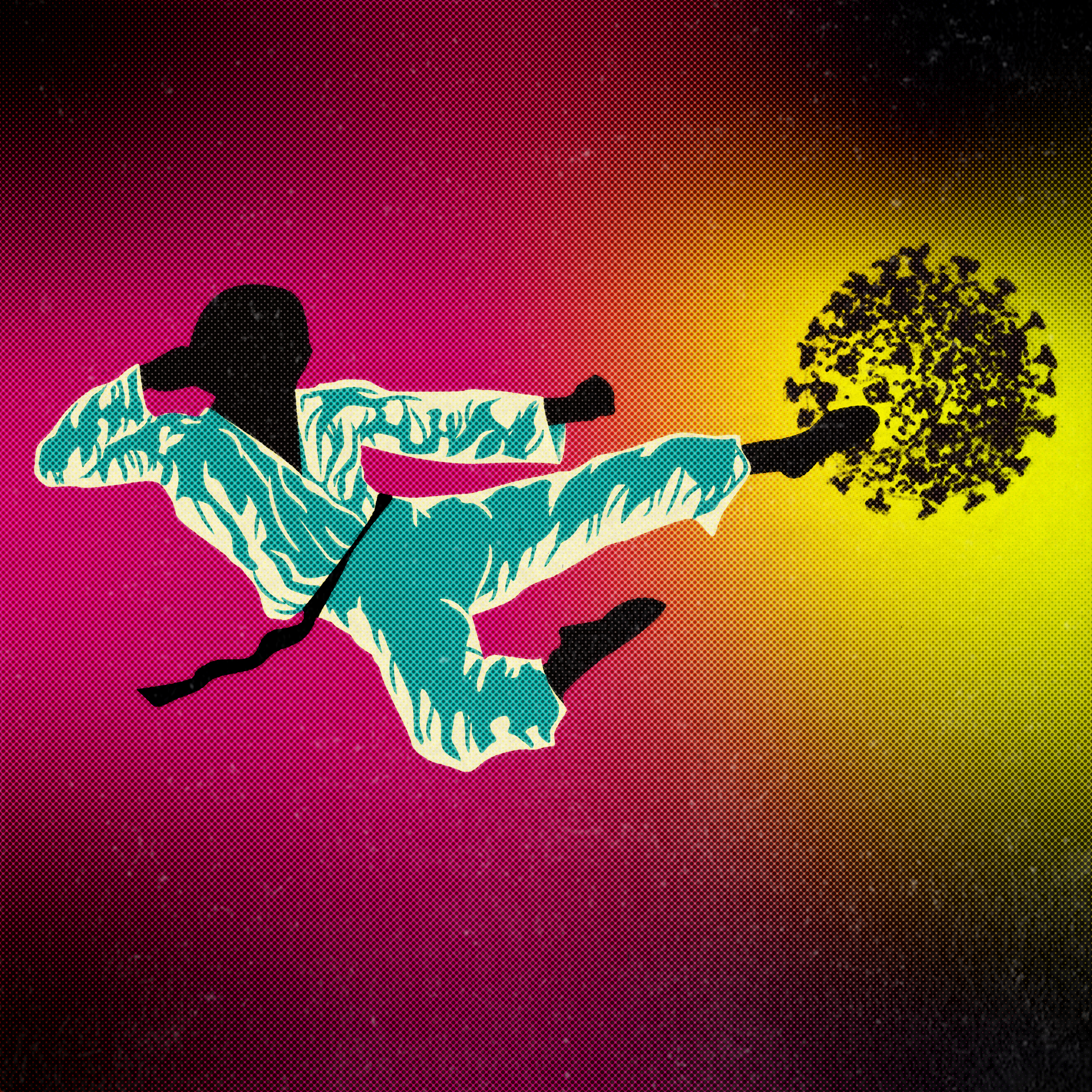 I had wanted to be some kind of martial arts master since the second grade. As soon as my family moved to the south end of Winnipeg, they found a guy who taught taekwondo classes out of the basement of the local community centre. Once I had a taste for it, my parents sent me to the Tae Ryong Park Academy to learn taekwondo.

By 2015, I had achieved my second-degree black belt and held a minor teaching post at the school. In the early years of my undergraduate degree at the U of M, I transitioned from taekwondo to Offenberger Muay Thai.

When the initial lockdown got called, it brought an end to 16 years of uninterrupted training. I did not know when I’d put on the gloves again. Worse still, if I got COVID-19 I might be among the one in three to suffer from long-term effects like debilitating fatigue, thereby putting my own body in the way of getting my training back on track.

Shortly before the start of the fall term, recreation services at the U of M announced that it would be resuming some of the pre-pandemic martial arts classes and clubs. My initial reaction was not charitable.

The idea of placing myself in a situation where I would be breathing heavily in close physical contact with strangers during a potential fourth wave of a deadly pandemic was not appealing.

Sparring, it seemed — especially for the grappling arts like judo and wrestling — would be extremely challenging to implement safely, especially considering they are high-contact sports and cannot be done from two metres away.

Given how niche the martial arts community is, I was not confident that the university had put sufficient thought into how to bring back these physically demanding classes and clubs safely.

I had concerns, so I raised them. I first reached out to director of recreation programs at the U of M Tanya Angus to get a handle on how the martial arts programs could be brought back safely.

“Everything’s a little bit different now than what it was prior to the pandemic,” Angus said.

“As of right now, the plan is that we’ll follow what they say in terms of the provincial guidelines and the restrictions that are in the return to play protocol and it will allow people to have contact.”

Those guidelines include controlling entrances and exits, staggering workout times, limiting capacity, maintaining two-metre spacing as much as possible, mandatory masks, double vaccinations and regular sanitization of hands and feet.

“One of the things that came forward in the return to play protocol for judo that we’re looking at for some of our martial arts programs is sanitizing their feet as well because there’s sometimes contact,” Angus explained.

“That was something that was a little bit new, but we want to make sure people are safe and if that’s what the suggested method is, then we’re going to continue to do that.”

The comprehensiveness of the restrictions and guidelines inspires confidence, and I can see aspects of my own practice adapting easily. Still, I wanted to reach out to the actual instructors to get their thoughts on how the restrictions would affect their styles.

Tim Manness has been involved the U of M’s wrestling club for the past decade and currently acts as a volunteer coach. While eager to get back to training, Manness is concerned about the club’s appeal given the restrictions.

“The current mandate of masks being worn at all times on campus will be very detrimental for our club,” he said.

“I don’t think many people are going to be interested in wearing a mask to wrestling. We’re hoping to keep the club running at whatever capacity we can until masks are no longer required and we can train normally.”

While some instructors like Manness predict there will be issues regarding the mandates, others are optimistic.

Horace Luong is a senior chemistry instructor at the U of M and an internationally recognized tai chi expert with 35 years of experience and proficiency in the chen, yang and sun styles. His tai chi classes are, in many ways, better suited to the restrictions than any other style.

“In terms of how the class would run, since it’s very solo […] I can walk around, do my corrections,” Luong explained.

“The students will have to participate with masks on, that’s something I’m not sure how people will take. We talk about inhaling, exhaling with movement and now you have something covering and that sort of disrupts that flow.”

Bryce Offenberger, a sessional instructor in the political studies department, is a former competitive fighter and has been running the Offenberger Muay Thai program at the U of M for the past 15 years. He broadly supports the measures, including the mask requirements.

“Naturally, we’re abiding by the protocols put in place by the government as instituted by the university,” Offenberger said.

“I know some gyms have come and gone with the mask requirement, but it’s not that hard of a thing and if it makes people feel safer, let alone if it does make people safer, then why not.”

Masks aside, the instructors’ enthusiasm to return is evident despite the restrictions, as is their passion to share the benefits of their style.

“You form a strong bond when you train hard with people,” Manness said.

“There’s a mutual respect that’s built. I’m always trying to make the club a fun place where people enjoy coming to each week, and where members are continually improving their skills.”

Luong, meanwhile, spoke at length about the personal development aspect of martial arts through the practice of tai chi.

“You’re […] not competing with anybody, you’re just doing it for yourself, and so there’s no need to worry about others,” he said.

Meanwhile, Offenberger sees his practice as a means to self-actualize.

“It’s this lifelong endeavour of incompleteness, essentially, that you just have to be comfortable with,” he said. “You can never master anything.”

“You have to find the inspiration to keep going on, and that, as you’re not maybe consciously aware of it, that’s that sort of journey of self-discovery.”

Meet the U of M’s first eco-marathon team

Close down to Hoe Down week