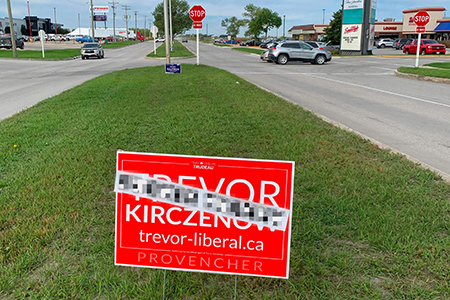 Trevor Kirczenow, the Liberal Party of Canada candidate for the Provencher riding, had his signs vandalized last week with what his campaign describes as hate speech.

Provencher is Manitoba’s oldest riding. For the past 21 years, it has been a conservative stronghold.

Kirczenow is a father of two, a diabetes advocate, Ojibwe Horse Society breed registrar, an accomplished violinist, a family health researcher and an author. He is also openly transgender.

On the morning of Sept. 9, Kirczenow’s supporters alerted him that his campaign signs in the Steinbach, Man. and La Broquerie, Man. areas had stickers covering them.

The stickers displayed a transphobic slur.

“I was so sorry for the people who initially discovered those stickers yesterday and who started sending me messages,” Kirczenow said.

“I know that many people were hurt by that and found it very offensive.”

This is not the first instance of tampering Kirczenow has seen with his signs this election.

“Right from the beginning of my campaign, my signs have been disappearing […] on such a dramatic and wide scale,” Kirczenow said.

“I also ran in 2019 […] I was openly transgender then, I’m openly transgender now. That hasn’t changed. But in 2019, it was just a handful of signs that disappeared, and I think that often happens during a political campaign, but this time the scale of it is just so different and now the stickers is a whole other added layer.”

Tampering with campaign signs is a criminal offence and those convicted can face sentences ranging from fines to jail time.

According to Kirczenow, when it comes to campaigning in rural ridings, signs matter and the theft and vandalism have impacted Kirczenow’s campaign.

“I have received messages from people saying, ‘Why don’t you have any signs up in my town? It looks like you don’t care about this part of the riding,’” Kirczenow said.

“It’s very hard to reach every corner of the riding, so in that context, signs become much more important […] for constituents to express themselves and to become informed about who is running.”

Despite the vandalism, Kirczenow is proud of his campaign’s growth since the last election.

“I think maybe people are taking me a bit more seriously this time around. I have a lot more volunteers on my campaign and a lot more support. I am knocking doors every single day with a dedicated team of volunteers,” he said.

“It’s interesting because the whole thing is just more intense. I’ve got a lot more support and I’ve also got this coordinated opposition that seems really determined to try and make my campaign invisible.”