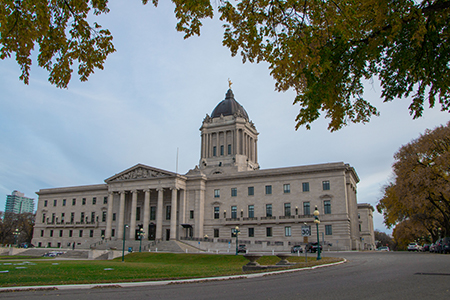 Then-premier Brian Pallister announced in August that he would not be seeking re-election but gave no indication as to when he would vacate his position at the time. That day came Sept. 1, when he was officially replaced by Goertzen.

“It’s clear to me that none of this was planned out,” said Manitoba Liberal leader Dougald Lamont.

“I spoke with Goertzen yesterday […] and he did not expect to be premier this week, I don’t think.”

Goertzen is expected to act as premier until the PC leadership race concludes on Oct 30.

“I hope that it’s uneventful, for everyone’s sake. We’ve had enough crises in the last year and a half,” said Lamont.

“His job is to keep the wheels on the bus, he has not been elected by Manitobans to bring in some great mandate of any kind.”

Goertzen expressed a similar sentiment during his first press conference as premier.

“I know that the role that I have is primarily viewed as one of caretaker,” Goertzen said in a statement Sept. 1.

“A new premier will be selected for Manitobans in 60 days.”

Goertzen then announced that five major bills from Pallister’s legislative agenda — bills like the controversial Education Modernization Act, Bill 64 — would not be moving forward in the fall session.

“This is very strategic,” Lamont said.

“This is a way for […] whoever the new PC leader is to pretend that they didn’t support Brian Pallister.”

It is difficult to tell who that new leader could be as the list of candidates for the PC leadership race remains in flux.

“[Heather] Stefanson announced her leadership campaign with the support of 24 MLAs […] it was very much a power play […] to say, look, don’t even bother competing with me,” Lamont said.

“So basically, [Scott] Fielding dropped out, [Rochelle] Squires dropped out and it looked like it might be a coronation.”

Heather Stefanson came out with strong support among the PC MLAs but a recent opinion column by former PC speech writer Deveryn Ross may have opened up the field.

Ross alleged that “people were laying the groundwork for a Stefanson leadership bid during the height of the COVID-19 third wave” nine months ago and demonstrated a lack of leadership as a minister.

Shortly after the article was published, Shelly Glover and Shannon Martin announced their candidacy.

“I do think [the article] disrupted the coronation,” said Lamont.

“They were just looking to have the most stable, minimum-conflict leadership possible.”

Goertzen and the PC party could not be reached for comment.