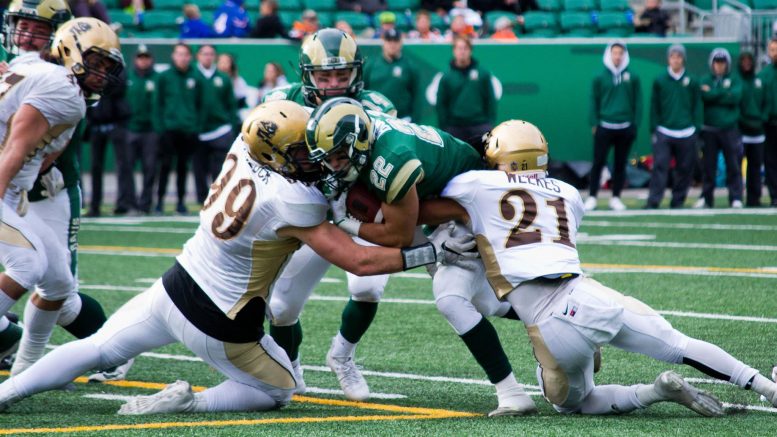 The University of Manitoba Bisons football team had not played a game in front of their loyal fans since Oct. 19, 2019  due to the COVID-19 outbreak cancelling the 2020 season .

That all changed on Sept. 25, 2021 as the herd faced off against the University of Regina Rams in the highly-anticipated start to the 2021 season. The Bisons came away with a 21-17 win after a great game of football played. The team started off slow but put up a second-half shutout to pursue the victory.

Going into a new season is often fun, but the feeling about the first time playing in front of fans after a long absence makes second-year defensive lineman Collin Kornelson excited.

“I think this opener is one of the most important games of the year,” Kornelson said. “It really sets the tone for the rest of the season and I think […] everyone is excited to be playing in front of their friends and family for the first time in two years.”

It is also a big game for players like Kornelson who will be playing their first game as a Bison.

“For myself, this is a big game,” Kornelson said.

“It’s my first time starting in a regular-season game at university level, so I am excited and nervous but more so happy to be competitively playing the sport I love.”

Although at its core football is all fun and games, at this level it is taken seriously by the teams involved, with preparation and focus being key to victory. The Bisons had a plan going into this matchup with the Rams.

“We just have to do our jobs to keep [Rams quarterback Josh Donnelly] in the pocket because he likes to run and ultimately hit them harder than they hit us and get some points on the board.”

“Preparing for the Rams and the rest of the season has been all about knowing the playbook from front to back, knowing your job on every play,” Kornelson said.

“For the past two years, we’ve been drilling [the] playbook through walk-throughs and film sessions.”

“Here in Manitoba, we were definitely at a disadvantage in terms of training as a team compared to other provinces because of how strict our COVID guidelines have been for the past two years,” Kornelson said.

“With that being said, our coaching staff did a great job of doing whatever they could to ensure we’d be able to train and get out on the field as soon as regulations permitted it.”

Overall, the Bisons definitely look prepared to start the season. Hard work pays off, and the team showed it on Saturday. With a win under their belt, it is great to kick off the first game at home undefeated.