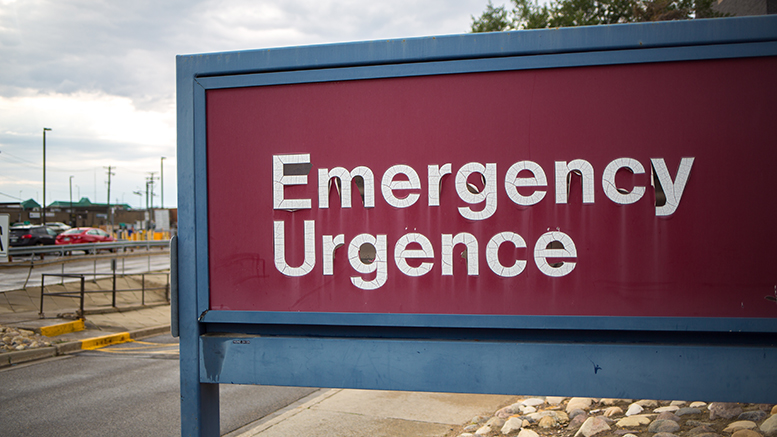 Calvin Lugalambi, an international student who recently completed his studies at the International College of Manitoba, is set to begin working toward a degree in civil engineering at the U of M this fall.

However, he faces uncertainty after finding himself saddled with $123,000 of medical debt after a stay in two local hospitals that lasted three weeks.

In early May, Lugalambi sought medical attention for abdominal pain at Victoria General Hospital where he found out that his insurance plan through Guard.Me — an international insurance service — had expired.

“I said, okay, if that’s the case, you know, do what you need to do, I’ll try to get this sorted and try to find out what happened,” he said.

“Because I need to get admitted, I’m in pretty rough condition, I don’t know what’s going to happen to me, I’m not trying to die.”

After testing, it was found that Lugalambi had an intestinal obstruction, a condition that can lead to life-threatening complications without prompt treatment.

The next day, he was transferred to St. Boniface Hospital.

Prior to leaving, Lugalambi tested positive for COVID-19, which he said he must have contracted while at the hospital.

This complicated things, causing Lugalambi to stay in the ward designated for COVID-19 patients and then later in the recovery ward following an invasive procedure that saved his life.

Lugalambi’s stay was lengthened after his abdominal pain returned — a CT scan found there was a collection of fluids in his pelvis causing infection — and he had to take a course of antibiotics. He was finally discharged May 25.

After his discharge, Lugalambi was able to get his insurance reinstated going back to May 4 — two days after he was admitted to Victoria General Hospital.

However, the insurance company rejected the hospital bills, claiming that the intestinal obstruction he was seeking treatment for was a pre-existing condition and therefore ineligible for coverage.

Lugalambi then began looking for help, trying to understand how he could be billed $123,000 for his treatment.

“Most of the doors closed on me,” he said.

“I was trying to get some help, but I couldn’t get help.”

Lugalambi was faced with two choices: agree to a plan to pay $1,000 a month to the hospital, or risk the bill going to collections, possibly resulting in his deportation from Canada.

His friend eventually launched a GoFundMe campaign to help alleviate the burden, which as of Aug. 23 has raised $55,371 from 893 donors.

“I really commend the efforts of people trying to help me out,” he said.

Being between two different post-secondary institutions has only made getting assistance more difficult. Lugalambi said UMSU has been unable to help him because he is not yet a member of the union.

However, he said the Canadian Federation of Students Manitoba has been supportive, reaching out to him and trying to spread awareness of his GoFundMe. Recently, the federation has been trying to set up a meeting with Minister of Health and Seniors Care Audrey Gordon.

Lugalambi emphasized that international students need to be given more thorough and detailed information about how the health-care system works in Manitoba, especially when it comes to technicalities which can leave students either without care or drowning in debt.

He has heard similar stories from other international students — in one case, a student allegedly being billed thousands of dollars for bloodwork. In another, a student in Saskatchewan passed away after being denied treatment while in a mental health crisis.

Manitoba is one of the only provinces in Canada to not allow access to its provincial health plan. Out of the territories, only Yukon does not offer health care.

Complications from this exclusion of international students from the Manitoba health plan also manifested this summer in terms of confusion over access to “vaccine passports,” which requires all eligible holders to have a Manitoba health card. Tommy Wu, a fifth-year computer science major at the U of M, also voiced concerns.

In 2017, when international students were still on the provincial health plan, Wu sought a tetanus shot after getting a cut on his hand. He had applied for a Manitoba health card, but it was not yet processed.

At the hospital, he was told that he would be billed over $1,000 to see a doctor. After being turned away from different clinics, he was finally able to get the U of M’s health service clinic to agree to put a hold on his account until he received his health card.

In the years since, Wu has struggled to consistently access medical care.

“I have totally no idea how [the] health-care system works here,” said Wu, noting that there are significant differences between how the systems work here and back in his home country of China.

Difficulties he encountered included being turned away from clinics because they did not accept his insurance, having difficulties understanding why decisions were made to send him to different doctors and an overall issue with finding a family doctor for regular care.

In one instance, he had a panic attack and sought care at a hospital. However, he was discharged after refusing to undergo a blood test due to a fear of needles.

At one point, a doctor referred him to another for the purpose of filling out forms for student accessibility services and medication. After their intake appointment and a blood test, Wu made another appointment only to find that the doctor seemed to have forgotten about the forms and medication.

In another instance, Wu was seeking screening for a what he feared was cancer and found that the soonest appointment was three months away — a duration of time in which, he said, he would have died had he been right.

He said that because of these issues, many international students from Asia find it easier to fly back to their home countries for treatment and then return to Canada after, although restrictions during COVID-19 have made this considerably more difficult.

“For us international students, this entire situation is […] pretty dire,” Wu said.

“If we get something here […] the only thing for us is death, think about that.”

A common thread through these experiences is that without proper information and support in navigating Manitoba’s health-care system, international students struggle to access the care they need.

“This is a long-standing issue that needs to be addressed,” said Lugalambi.

“As you can see, many people out there [are] being affected even considering the fact that vaccinations and health cards [are] another issue as well for international students.”

Lugalambi would like to see change happen in how health care is provided to international students and especially in how students are educated on Manitoba’s health-care system.

“We’re not treated as well as people say,” said Lugalambi.

“It needs to change. People aren’t going to stay quiet [anymore] […] when we’re already living in a very difficult time.”