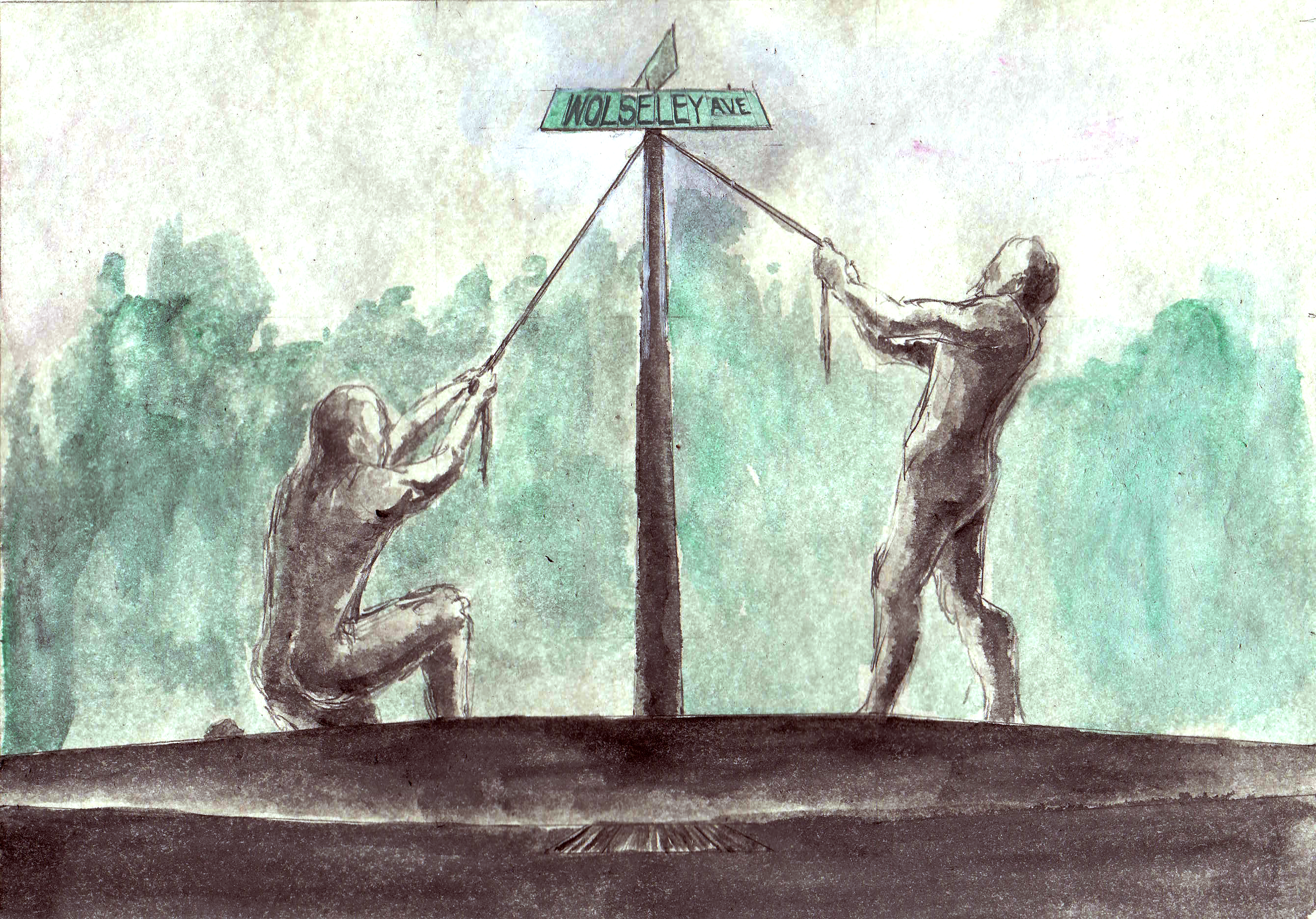 Wolseley — occupying the space sandwiched between Portage Avenue, the Assiniboine River and Maryland Street — is named after Col. Garnet Wolseley, who is known locally for his leadership of the Red River Expedition. The expedition was sent to supposedly tide over Manitoba’s transition to confederacy following the Red River rebellion. However, many Métis communities remember this expedition as the “Reign of Terror” — a name meant to draw parallels to the bloody tyranny of upper-class governance during the French Revolution just a century earlier.

Pamphlets about Col. Wolseley’s legacy in Manitoba were distributed throughout the neighbourhood last month. One line read, “He personally incited racism, violence, murder and displacement when his troops arrived here.” What is usually read in grade-school history books as a patriotic expedition was truly a militia made up of hundreds of Anglo-Protestant settlers bent on avenging the execution of Thomas Scott — a radical Orangeman who opposed Métis sovereignty and Louis Riel’s leadership.

Further, Col. Wolseley was a crucial player in watering down Indigenous influence and promoting then-prime minister John A. Macdonald’s project of colonial expansion westward via the settlement of Anglo-Canadians.

Not only were Métis populations in Manitoba terrorized and brought under military occupation during this period, but the militia’s presence stimulated settlement. By the summer of 1870, it wasn’t just water funnelling into one of Canada’s largest flood plains. Just decades after Col. Wolseley established Canadian troops on Métis soil, white settlers began composing a majority population and diluting the Métis population’s social and political influence over their home region.

For Métis populations that didn’t leave during the Reign of Terror, rape, lynching and dispossession — motivated by ethnic and religious divides — defined their introduction into confederacy.

Although a shameful face of Manitoba’s introduction to Canada, Col. Wolseley’s name also rings a sour bell for several Indigenous populations around the world. From Egypt to India, Crimea to Burma and China to South Africa, Col. Wolseley participated in and led military campaigns designed to eradicate threats to Britain’s imperial interests.

Having his name plastered on the streets of Winnipeg is not only an insult to Métis populations locally, but to dispossessed populations globally. Indeed, he was a central cog in the violence that permeated through colonial thinking and structures.

Col. Wolseley’s international reputation runs deep and his imperial influence as a key figure in the British military has played such a significant role that many of his historic interventions continue to influence the contemporary state of geopolitics. His time spent in the military has linked global processes around the world with British economic exploitation — likely one of the most radical being the suppression of the Egyptian ‘Urabi Rebellion in the 1880s.

Following the American Civil War, cotton exports from the United States dropped significantly and created a massive demand for a new primary cotton source in British mills. Within Britain’s colonial metropoles, over 500,000 individuals became unemployed, redefining the 1860s as a “cotton drought.” In this same period, British capital investments flooded Egypt to stimulate cotton production, increasing Egyptian exports five-fold. Nearly 40 per cent of all arable land in lower Egypt was converted to sustain the new and heavy demand for cotton. Although the drought stimulated investment in Egyptian infrastructure and cotton exports, it also established a volatile plantation economy linking each Egyptian peasant directly to the dictates of western politicians, venture capitalists and bankers far away.

Following the reintroduction of the U.S. into the global economy, the price of cotton plummeted and forced producers to default on loans taken out with heavy interest rates from western bankers. The ultimate effect was the liquidation of Egyptian assets into western hands. This period in history is famed for the financial seizure of the Suez Canal — currently one of the largest and most profitable shipping routes in the world — to stave off national bankruptcy. The massive land dispossession witnessed in this period culminated in mass resentment of British financial imperialism and motivated a peasant uprising known as the ‘Urabi Rebellion.

Fearing the loss of control over the financial system in Egypt, the British invaded. It was Col. Wolseley that led the campaign against the ‘Urabi Rebellion and defeated the national uprising on Sept. 13, 1882, seizing control of the Suez Canal and subsequently all of Egypt. Col. Wolseley’s influence would establish a 74-year colonial occupation of Egypt.

Just like the colonial occupation of Egypt, Col. Wolseley stole and desecrated Indigenous land in Manitoba, too.

If Canada is to reconcile these injustices, colonial namesakes must be removed and Indigenous roots restored.

Whether it was settler colonialism in Manitoba or financial colonialism and imperialism in Egypt, Col. Wolseley was a force that proliferated unimaginable suffering and dispossession globally. His name has no place in Winnipeg’s streets.