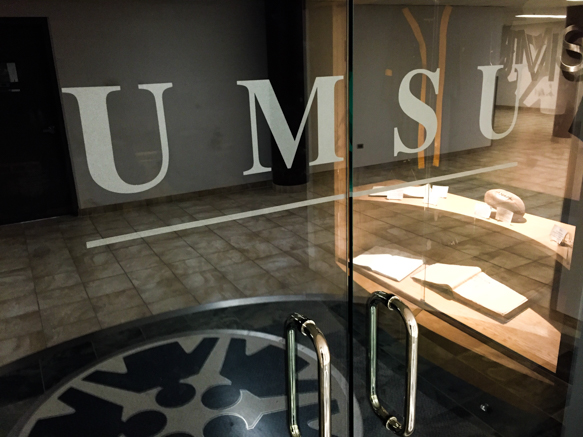 By election to be held for vacant UMSU position. Photo by Chantal Zdan

At its latest meeting April 8, the University of Manitoba Students’ Union (UMSU) released details of next year’s budget.

“The UC capital project is updating the UMSU space in UC to fit the needs of today’s students,” said Brendan Scott, UMSU vice-president of finance and operations, and UMSU president-elect. “The goal is to create the following spaces: [a] Studentcare health and dental office, [a] student businesses start up space, [a] multipurpose flex space for clubs, [an] updated digital print centre [and a] larger dental clinic.”

According to Scott, UMSU has budgeted $400,000 to renovate the UC building.

The new HVAC system will cost around $40,000, with costs split between the university administration and UMSU.

A proposal requesting an expanded dental space in UC is currently in progress. The new space would be roughly twice as large as the previous clinic, which had an operating capacity of four chairs.

“Our goal is to double the size of the dental space and have eight to 10 operating chairs,” he said. “Currently we are working with the U of M faculty of dentistry in creating [a request for proposals] to have a new dentist occupy the space, [requesting] that U of M students operate in the space and [that] direct billing is offered to U of M students that have procedures in the space.”

“Very exciting stuff, we hope to [have] it fully operational by September 2022,” he said.

According to Scott, this year presented particular challenges in designing the budget, given the uncertainties caused by the COVID-19 pandemic.

“The general focus of this budget is to address the difficulties that students and the union face during this pandemic,” he said. “When creating a budget, one must make the best estimates under specific assumptions.”

“The assumption that guides this budget the most is that normal operations cannot commence until September 2022,” he continued. “This is why UMSU businesses are not budgeted for with the exception of the Service Centre and GPA’s.”

He made clear that it’s possible some businesses may open partway through the year, but “because we can’t say with 100 per cent certainty that they will open, we do not budget for them.”

“This was added by executive committee once it was confirmed we would be going to referendum on the matter,” he explained. “This was added with the knowledge that the budget could be amended at the board level if the CASA question was to fail, [as it is] easier to remove money than to add money.”

The UMSU board estimated it will receive $150,000 from the endowment fund toward UMSU’s governance budget and wage subsidies totalling over $670,000.

“The endowment fund and wage subsidies are extra forms of income that aid in the operation of UMSU while we cannot fully operate,” Scott said. “They allow us to operate the Service Centre and GPA’s even when we’re not allowed to be fully operational and students are not in person for classes.”

“In essence, every year the endowment fund helps us with funding, now with [COVID-19] the wage subsidy allows us to keep UMSU staff working.”

The budget has been approved by the executive and finance committees of UMSU.

Board members were given three weeks to review the budget and generate questions before the next meeting when the budget will be debated and voted on.