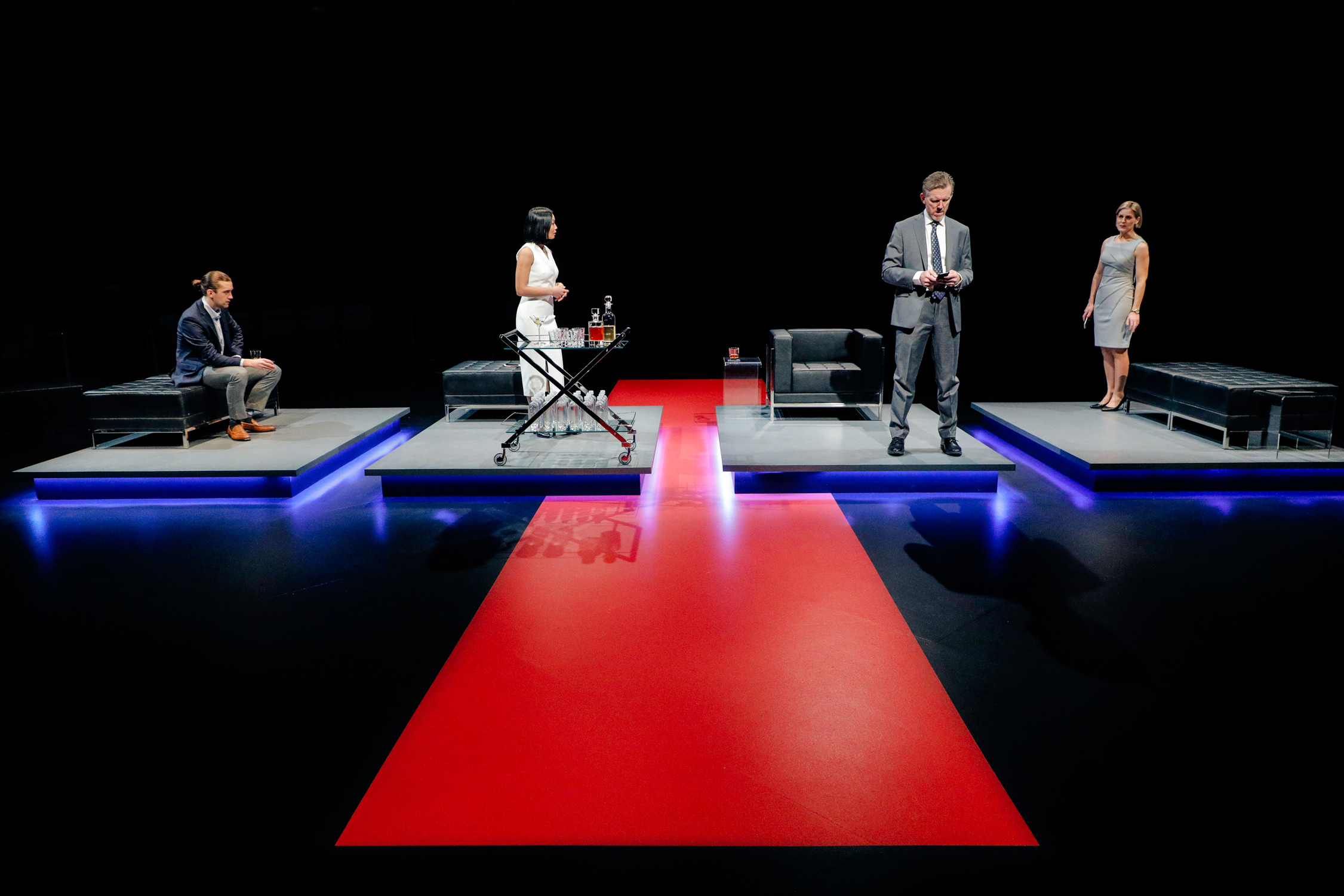 Post-Democracy, a commissioned work from two-time Governor General’s Award finalist Hannah Moscovitch is receiving a digital debut. The production is proudly presented by Winnipeg’s Prairie Theatre Exchange (PTE) and filmed for the screen by Ice River Films. The show was shot and rehearsed entirely during the COVID-19 pandemic with proper health restrictions in place to ensure everyone’s health and safety.

The story focuses on the upper crust of society — those corporate executives in the “C-suite.” In the play, the chief executive officer (CEO) of a nameless company is on a business trip with his inner circle to close a major deal when a scandal breaks back home. Over the course of the hour-long show, damaging secrets come to light and each character reveals who they are in the dark.

The play is recommended for mature audiences and rightfully so — it deals with some incredibly sensitive themes and it is an uncomfortable show to watch. Moments of levity are few and far between and the characters are all different brands of terrible people, causing the story to sometimes drag and making it hard to root for anyone. Compounded by the story ending with a pessimistic, glass-half-empty anecdote of nothing changing or getting better and these factors lead straight to darkness-induced audience apathy.

Although the play paints all of the characters with the same negative, privileged brush that places themselves above others, the four Winnipeg-based actors breathe life into these characters with standout performances. Arne MacPherson is stern and aloof in the role of Bill, the company’s CEO, while Stephanie Sy is passionate and commands the audience’s attention as Bill’s daughter and chief financial officer, Justine. Her performance is powerful, especially upon learning of her father’s secret toward the end of the play. Kristian Jordan’s Lee is unapologetically horrible from the outset — with a tendency to purposefully talk over Justine and his preoccupation with closing the deal above all else. His character only gets worse, but his acting remains stellar throughout. Finally, though she spends the least time on stage, Shannon’s feelings of shock and betrayal before her final exit are palpable and impactful due to Alicia Johnston’s engaging portrayal.

Post-Democracy was directed by PTE’s artistic director, Thomas Morgan Jones. In his director’s notes, he said the production purposefully utilizes “the language of film” to control what the audience sees throughout the play. In this way, “creating theatre felt so familiar and at the same time, completely new.”

Jones also had the added challenge of staging the show in a way that accommodated health and safety protocols, such as social distancing. “We staged the production for physical distancing while choosing a design that still supported the story,” he said. “We used the restrictions as artistic invitations to inspire our work.”

He is speaking, of course, of Brian Perchaluk’s set, which facilitated this by providing each actor with a raised, square platform to occupy during their time onstage. Not only is it an innovative, sleek and modern set, but it also has the added bonus of being safe in these unprecedented times.

Prairie Theatre Exchange’s virtual production of Hannah Moscovitch’s Post-Democracy is available for viewing until April 25. To learn more about the show and for ticketing information, please visit pte.mb.ca.

Iconic musical remains a triumph of the human spirit

Bringing the magic of theatre to you