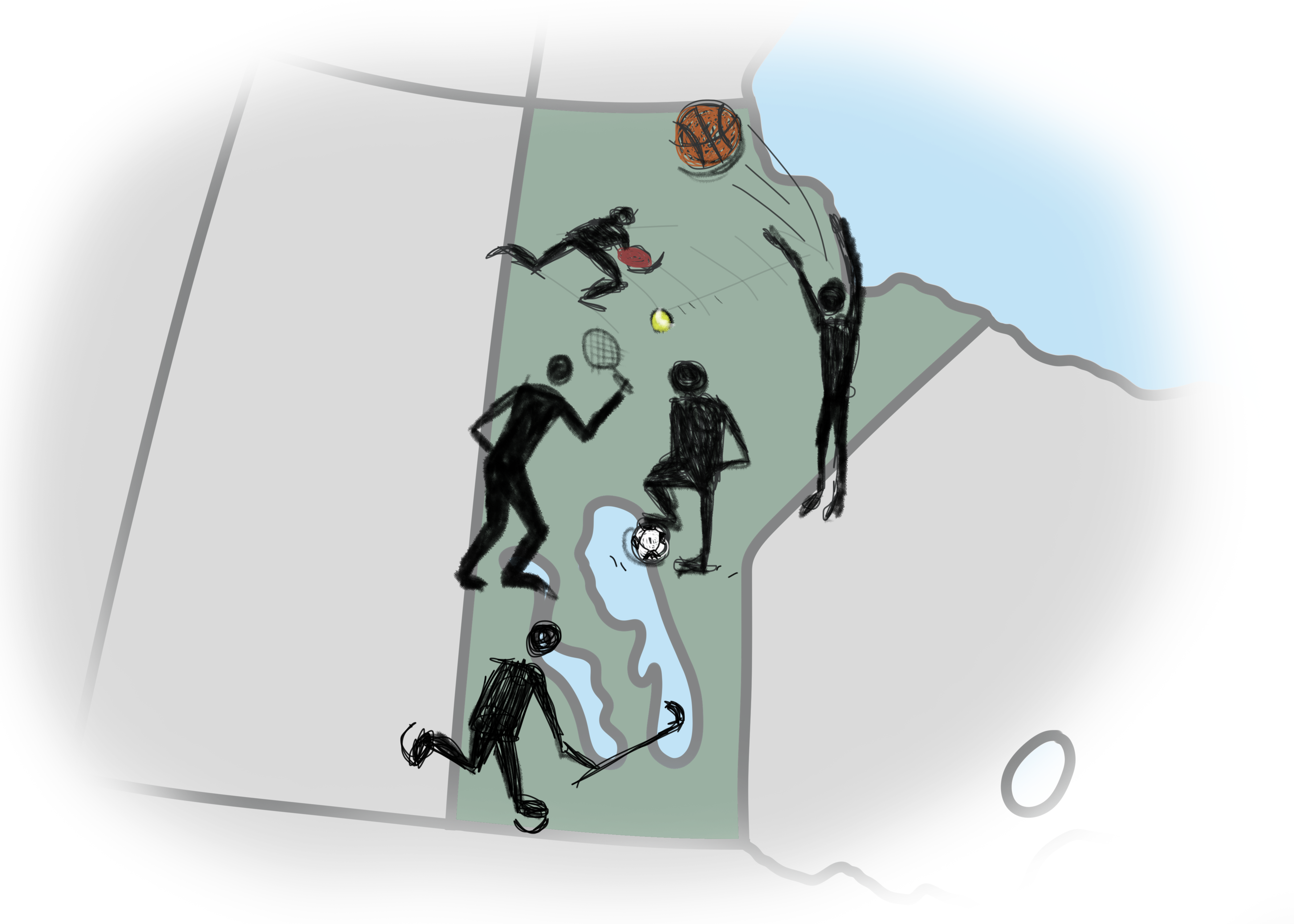 The beginning of the COVID-19 pandemic in early 2020 brought the entire globe to a standstill. Global markets, schools and businesses were closed to the public. In Manitoba, U of M students began the unconventional transition to online studies mid-way through the winter semester.

The National U-Sports volleyball championship scheduled for March 13 to 15, 2020 was cancelled the day before teams were scheduled to begin competition, a huge blow for the men’s volleyball team.

As the spring and summer months unfolded, it became clear that it would be extremely difficult to hold sports games under safe conditions. However, the safety challenges of COVID-19 were properly addressed by the National Hockey League (NHL) and National Basketball Association (NBA) when the two leagues created the first-ever bubbles for their end of seasons and playoffs.

As sport facilities and athletes began to reintroduce themselves to each other and COVID-19 cases in Manitoba dropped, the potential for athletics in 2021 began to look promising.

Yet, an imminent second wave of COVID-19 loomed in the distance. With this danger ahead of Canadians, the Canadian Football League cancelled its season, ending hopes of a prospective IG Field bubble in Winnipeg.

Heading into fall, the potential for sports in Manitoba was looking grim. U-Sports had cancelled nearly all competitions, the NHL season was delayed and minor sports were facing increasing uncertainty.

October brought hope. Manitoban hockey leagues from junior to minor were underway and Bison athletes were safely practicing their craft.

Yet, the second wave proved to be too much for the sports landscape.

U-Sports and Canada West cancelled all winter sports championships, hockey across the province was shut down and fitness facilities and public gyms were closed as the provincial government enacted code-red restrictions.

During the winter break, the IIHF World Junior Championship gave Manitobans something to cheer for. With the help of Winnipeg Ice forward Peyton Krebs and Jets prospect Cole Perfetti, Team Canada finished second in the Edmonton bubble.

U of M athletes also found something to celebrate during those dark winter months. A school-record 145 Bisons were named Academic All-Canadians, highlighted by U-Sports female athlete of the year, swimmer Kelsey Wog.

Heading into the new year, there was optimism that sports in the province would make a return in 2021.

The Winnipeg Jets returned to the ice at Bell MTS Place for the first time in 10 months.

Although the return of the Jets and professional sports in North America would help keep Manitobans preoccupied, athletes and coaches yearned for a return to their respective sports.

Hockey players in the province would unfortunately face another obstacle. Junior leagues, AAA hockey and minor hockey were all forced to cancel their seasons in February.

Despite these setbacks, winter athletes would find success in Alberta. Kerri Einarson and her team out of the Gimli Curling Club would win their second consecutive national championship at the Scotties Tournament of Hearts inside Curling Canada’s Calgary Bubble.

Team Zacharias, comprised largely of U of M students, would also compete at the Scotties for the first time.

With the win, Einarson and her team will now represent Canada at the next Olympic games. Einarson would also go on to win the national mixed doubles competition a month later with teammate Brad Gushue.

As public health officials, doctors and nurses slowly contained the spread of COVID-19, vaccinations began to roll out in the province. Thanks to their efforts, Manitobans were granted a return to fitness facilities and gyms.

In Saskatchewan, the Brandon Wheat Kings and Winnipeg Ice would begin play in the Western Hockey League’s (WHL) East Division Regina bubble. The return to competition gave WHL players the opportunity to showcase their talents to professional teams and Canadian universities.

The Winnipeg Blue Bombers and the Winnipeg Goldeyes are preparing to play seasons at home for the first time in nearly two years.

Yet, there is still uncertainty in the air. Variants of the novel coronavirus have begun to circulate in the province and around the country. For a full return to sport in the province, citizens will need to continue to be vigilant and mindful that if they wish for life to return to the way it was prior to the pandemic, they need to work together.

Throughout the pandemic, the resilience of Manitobans has been on full display. From strict social distancing measures, prolonged isolation, discrimination, financial uncertainty and, for too many, the loss of loved ones, the last year has taken a toll on Manitobans mentally and physically.