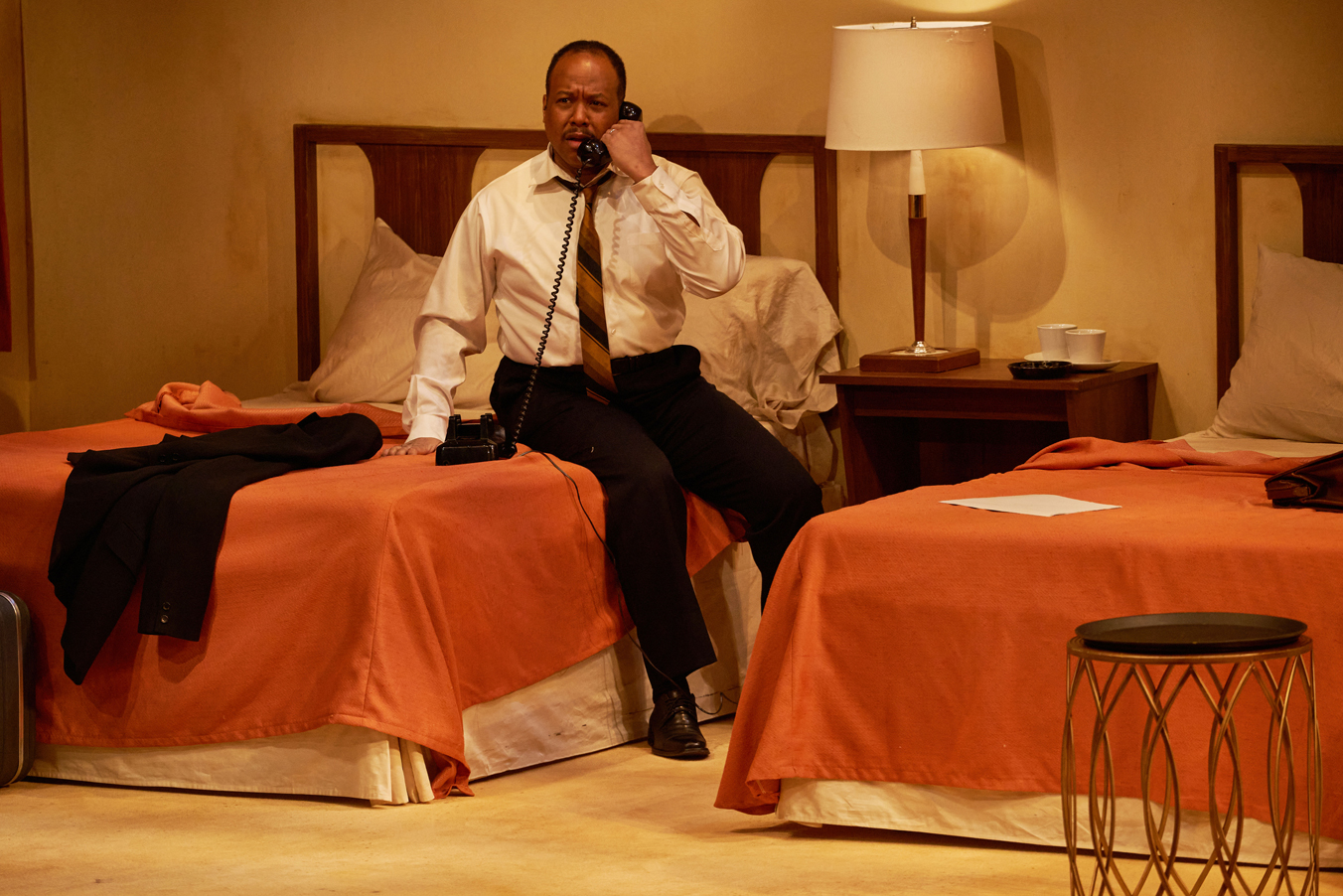 Image provided by the Royal Manitoba Theatre Centre and photo by Hugh Conacher.

Though the Royal Manitoba Theatre Centre (RMTC) still can’t open its doors to the public due to current public health orders, the RMTC is more than happy to welcome online audiences to its latest virtual production of Katori Hall’s The Mountaintop.

Performed on the RMTC mainstage and captured for the screen by Frank Digital, a local video production company, the play is set on a dark and stormy night in the year 1968. The evening before his assassination, civil rights leader Martin Luther King Jr. is alone in his room at the Lorraine Motel, restless and desperate for a cup of coffee and a cigarette. He is visited by a maid, Camae, and the two engage in small talk that soon takes a turn for the introspective and reveals shocking truths.

The intimate set, constructed by Brian Perchaluk, successfully transports the audience through both time and space — the functioning black-and-white television, vintage telephone, the lights from the hotel marquee outside King’s window and superb costuming courtesy of Rachel Forbes all work to ensure maximum immersion.

The play features local actor and U of M alumnus Ray Strachan in the role of King at his most vulnerable. By showing the preacher’s bold courage and quiet fear, Strachan’s performance removes the veneer of King as a saintly American icon with the reminder that he was just as human and imperfect as any of us — that he is no God, that he was just a man conquering his fears to do what was right.

Cherissa Richards as Camae is a tour-de-force in her delivery of not one, but two of the play’s most memorable monologues — the first about looking to the future and the second about a devastating event in her past. Able to stand foot-to-foot with King and then some, Camae is a perfect deconstruction, and then subversion, of the manic pixie dream girl.

The play, at least in the beginning, relies on the dark comedy of King’s impending assassination but, with the spectre of death literally looming closer, it makes the trivial things King does — like telling his daughter to relay a message to his wife on the phone — all the more sombre and poignant.

Hugh Conacher’s lighting design is both subtle and explosive and his video work in the play’s later phase is chilling and effective without being distracting. In the play’s last moments, superimposed over the set is a montage of both ordinary and prominent Black figures who carried King’s baton over the last 50 years and made a difference in the advancement of civil rights, both in life and in death.

The show is brilliantly directed by RMTC’s associate artistic director and Winnipeg’s own Audrey Dwyer who, along with writer Hall and actor Richards, is a proud woman bringing a strong voice for gender equality. With Black Lives Matter and the #MeToo movement, this struggle for equality remains painfully relevant today.

The ending’s starry lighting and simple, elevated podium highlight Strachan, with his powerful cadence delivering King’s words, and will simply leave you speechless.

The Mountaintop is, in a word, transcendent. The company outdid themselves with this production and came through with the type of theatre that, after this lengthy drought brought on by COVID-19, completely satisfies and will keep you so until the doors open again.

The play reminds us that “love is the most radical weapon there is” and encourages us all to pick up the baton and pass it along.

The Mountaintop is available to view online until March 14. For ticketing and viewing information, please visit royalmtc.ca.