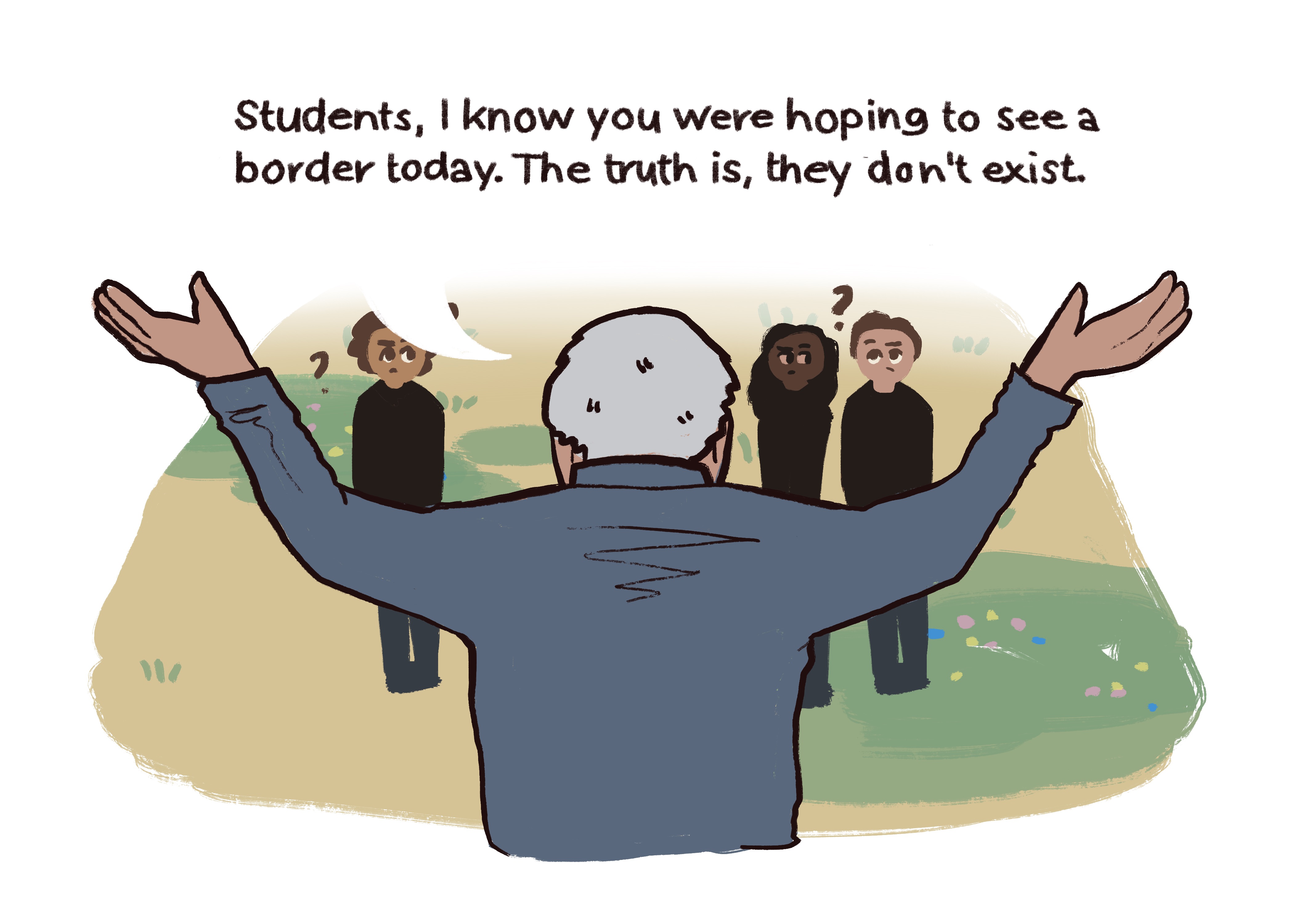 It was clear that COVID-19 would become a health crisis when anarchist thinkers from around the world were pleading for populations to follow centralized state authorities. The pandemic has proven that borders are crucial for reducing the global spread of disease. However, as we imagine our world re-made by the novel coronavirus, activist groups must continue to advocate for the abolition of borders and the violent dynamics these arbitrary lines precipitate.

Nationhood is an imagined idea as fictitious as any other constructed social system. Yet, every corner of the globe has been divided into parcels of land to be exploited, usually at the benefit of a small minority.

These imagined communities rarely embody shared values. Considering the population of most nations combined with geographic breadth, it would be foolish to assume everyone shares a belief system based on dotted lines on a map. What does it mean to be Canadian? Personally, I don’t have an answer. The truth is: borders have been constructed to serve the interests of power and power alone. It is a mechanism to guard wealth inequality.

Intuitively, this all makes sense. Individuals with large chunks of accumulated wealth move with relative ease, but those residing in nations that have been subject to traumas by no fault of their own remain forced to stay in their dire circumstances.

Scholars often refer to the contemporary world as “globalizing” — the notion that the world is becoming increasingly connected through transportation, technology and trade. But what pieces of our world are actually globalizing? It is true, time and space are shrinking with increasingly fast transportation. Even our social lives have been dislocated from space and our relationships are accessible through the tap of a button on our smartphones. Yet, the primary things moving around the world remain commodities and wealth. As a matter of fact, pre-COVID, people were being restricted from moving across borders at stricter rates than any time in history. Passports were once seen as largely symbolic tools before the onset of the Second World War. Now they are wielded by many with national pride.

If we truly believed the things that we tell our children, it would be safe to assume most of us would be anarchists in favour of border abolition. If you’ve ever heard the phrases “It doesn’t matter who started it,” “Two wrongs don’t make a right,” “Do unto others…” or “Don’t be mean to people just because they’re different” growing up, then you were unwittingly raised with anarchist sentiments. But these important lessons usually get distorted by blatantly incorrect fallacies that feed anti-immigration and contradict the lessons we were taught when we still held onto a degree of innocence.

Fallacies pertaining to terrorism, crime rates, job availability and wage deflation are blatantly incorrect and are primarily fuelled by xenophobia.

For example, a study authored by Nicola Jones from the University of Warwick indicates that high migration rates do not correlate with terrorist activity. Rather, high migration rates may actually reduce terrorist acts. The Cato Institute — a conservative-libertarian think tank — controversially published a study in 2016 which took a great deal of statistics out of context and served as fuel for anti-immigration rhetoric in the U.S. It is unclear whether they attempted to publish damning immigration statistics or not, but in many cases some of the stats did the opposite. They asserted that from 1975 through 2015 the chance that an American would be killed in a terror attack by a refugee was roughly 1 in 3.64 billion a year. To put this into context, more people died from peanut allergies than refugee-initiated terror attacks in the same period.

And key studies have been published to debunk other anti-immigration fallacies, too.

When your average globalist is asked what they advocate for, it usually doesn’t include the abolition of borders and states. Renowned anarchist anthropologist David Graeber refutes really-existing-globalization as contradictory in practice. However, he imagines a globalized world as the free movement of people. “Anything else is just a sham,” he says in his seminal book Fragments of an Anarchist Anthropology.

The free movement of people could serve to guard from things like labour exploitation. Circles of economists sitting in their ivory towers love to philosophize about which pseudo-scientific economic model would best alleviate poverty the fastest. To Graeber, the answer is quite simple: the immediate pardon of international and personal debt, the abolition of intellectual property and, of course, the abolition of borders.

Many may question how feasible these measures are. I ask, why do we think the piece of paper we call money is worth anything more than it is? Simply, it is because somebody powerful told us it was. The exact definition of fiat money — the type of money the world uses — is currency that is delimited by bureaucrats. Still, it is fairly uncommon for people to question how strange this unwarranted faith is. Our taboos are selective, and they usually materialize in the conservation of grotesque privilege.

If we can put our faith in systems of power that regularly exploit labour in the interests of the ultra-rich and perpetrate violence in the name of sovereignty, who is to say we cannot put our faith in everyday people? The world is what we see it as, and it could be radically improved if we used our imagination and stopped questioning the feasibility of sound and equitable policy that appears different to the status quo people are used to.