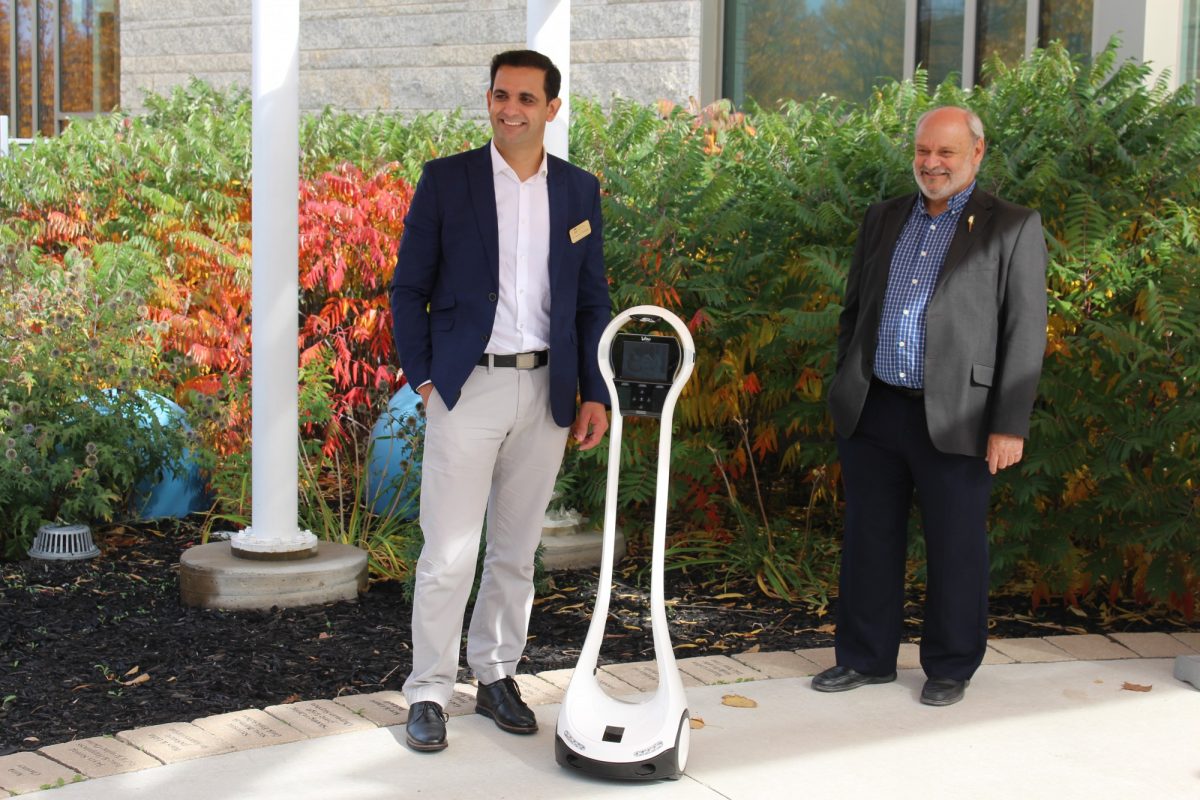 A team at the U of M’s Rady faculty of health sciences is developing a new way for people with dementia and their caregivers to interact.

Amine Choukou, an assistant professor in the department of occupational therapy at the college of rehabilitation sciences, is co-lead of a team working on telepresence robots, a tool to enhance the way caregivers and people with dementia communicate.

Due to their memory impairment, people with dementia may forget to take a bath, clean their house or eat, and are at greater risk of injury. These telepresence robots are being developed to support and care for them in the physical absence of the primary caregiver.

The robots are operated by computers, tablets or smartphones, which allows the caregiver to “see” and “hear” what the robot is observing in real time. Additionally, it also gives the patient the capability to look at and interact with family caregivers at the same time in ways that are sometimes not possible.

“It can be tricky for a person with dementia to use a mobile phone,” Choukou explained.

“It’s even maybe risky, or simply not recommended for people with dementia to use a mobile phone because someone can steal their password — they don’t know how to manage passwords and all that […] This pathology, it’s related to memory, so imagine how challenging it is to function in daily life.”

Hence, a telepresence robot is a novel and innovative way to improve the relationship between a family caregiver and someone suffering from dementia, especially during a pandemic.

Choukou said the inspiration behind telepresence robots came from similar robots being used by big companies to collaborate with people who are not physically present in the country.

“Initially, this technology [was] used in multinational and multisite companies to improve the collaborative work,” he said, explaining that it functions as a more tangible version of something like Zoom.

“Companies basically use it because they are meeting so many people and they want to show what they’re doing in different locations and communicate [to] different people with different things around them.”

He emphasized that the major appeal to telepresence robots is the physical presence of something nearby, which is not the same as having a human there but mimics it enough to make a difference. Another benefit, particularly for those with dementia, is that telepresence technology requires minimal involvement on the patients’ part. In fact, the robots can even be commanded to charge themselves.

“The involvement of the patient is extremely low, should be less than one per cent — maybe touch it one time a month,” Choukou said.

“We think we would be able to train the caregivers so that they […] can use the tech.”

This project is mainly aimed at family members acting as caregivers, who need to maintain a continuous link to their loved one while maintaining a life of their own. This situation is especially common during the pandemic when the caregiver may be isolated from their loved one due to social distancing restrictions.

Telepresence robots give caregivers the ability to interact with the patients without leaving their home.

“If you’re a caregiver and you’re working full-time, it’s extremely hard to reach out to your family member living with dementia,” Choukou said.

“So you might use this technology just over a lunchtime to make sure. Possibly in the morning […] prior to going to work, during your breaks and then lunchtime, or simply in the beginning of the evening, things like that.

“You can still do that and you will feel less burdened. So, it’s about time management, but also the burden and your own well-being, because you might be working full-time but blaming yourself.”

At the moment, the telepresence robot program is a pilot study, with 15 families in four regions of Manitoba. Choukou acknowledges that not all areas have sufficient internet access to guarantee connectivity for the robots, which is a concern for the future.

“We want to learn about the process, see how people interact and what are the effects,” Choukou said.

“But all that is a pilot study, so what we want to do is to make sure that we can go to a broader study and, most importantly, implement the technology in the communities.”

Choukou said if the families find the telepresence robots useful, the researchers will give them the technology to keep because their overall goal is to improve dementia patient care in real terms.

“We’re trying to give back to the community.”