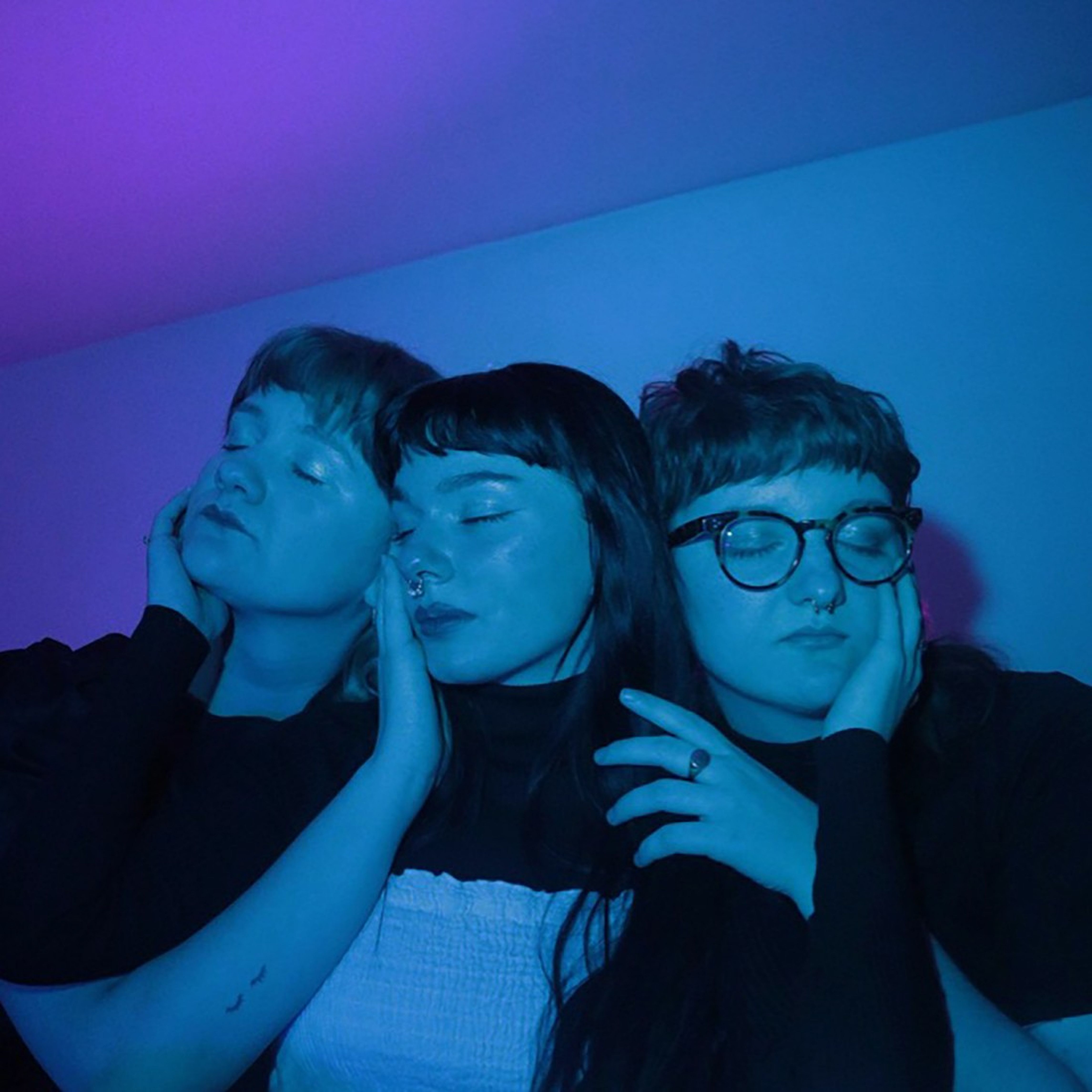 Being perceived is hell. The feeling that you are standing wrong in a crowd, that your voice is weird, that your clothes and skin and thoughts and gender are bad — the nightmare of perception has been written into oblivion, one of the few truly inescapable forces that tie us all together. The eye of another is a complicated place to live, and answers on how to navigate it are few and far between; some look to books and lectures, some to therapy and some choose not to look at all. Many, however, including the members of Winnipeg’s Virgo Rising, look to the stars.

“The rising sign represents how you’re perceived and how you engage with other people, which is something that really influences our music,” said 20-year-old Jenna Wittmann, who, along with fellow multi-instrumentalist sister Lauren and guitarist and vocalist Emily Sinclair, is gearing up for the release of debut EP Sixteenth Sapphire, a spidery collection of songs that tackles the ways we engage with visions of ourselves and others.

“Having Virgo in our charts is something we all have in common — I have a Virgo rising and Lauren and Emily are both Virgo suns,” Wittmann said. While the trio’s music isn’t about astrology in any obvious way, they play with intuition and connection that may well have cosmic origins.

The band members have a knack for subverting expectation, writing songs that morph and quicken at a moment’s notice — their playing is technical and expressive, a musical chemistry recalling the intense symbiosis of bands like Big Thief or early Girlpool.

“I find it really interesting when I’m listening to a song and it ends up somewhere totally different, but it’s not really something we purposely try to do, it just seems to happen naturally,” said Wittmann. “It’s also really fun to play those kinds of songs live and feel the audience’s reaction.”

The trio describes recording at House of Wonders as nerve-wracking. “We weren’t super familiar with ‘studio etiquette’ and were nervous most of the time we were there,” said 23-year-old Lauren Wittmann, but it was exhilarating, too — a chance to elevate their rich, complex songs to their full potential.

“We had a strong sense of what we wanted going into the studio but we still did some experimenting and messing around,” said Jenna Wittmann. “[Producer Adam Fuhr] has a lot more gear and instruments at the studio than what we’re used to, so we were able to try lots of new things and find new sounds that really worked for us.”

Those new sounds include the psychedelic smear of “Sleep in Yr Jeans” and the swirl of atmosphere that closes “Molly Ringwald Dances in the Front Row.” The trio possesses an enviable restraint and understanding of tension, knowing just when to pull back and when to explode into technicolour.

As Lauren Wittmann describes it, that intense chemistry came naturally, the trio’s friendship blooming on the strength of their shared musical language. “The first band practice we had we were all so shy,” she said, “but warmed up to each other pretty quick and found we had a lot of fun making special music together.”

For 19-year-old frontperson Emily Sinclair, the record is an ode to that rare symbiosis, a document of coming together. “My mom wore a sapphire ring that she eventually gave to me when I turned 16. I wrote a song about it a while back and I called it ‘Sixteenth Sapphire,’” she said. “We all weren’t crazy for the song, but for some reason the title of it stuck with us. We thought my sapphire represented not only our songs, but our friendship.

“Sapphire is also an incredibly durable stone, so it represents how strong our bond is.”

The band members said they are always writing new material and a full-length record is somewhere on the horizon. For now, though, the trio is basking in the strange light of Sixteenth Sapphire, a singular document of perception and youth and friendship. Whatever comes next will likely only be brighter.

“I’m just proud of our general creative power and ambition when it comes to making and playing music,” said Lauren Wittmann. “I think we’ve come a long way and are really finding our voice and our sound, and I’m proud of us for that.”

Musical chemistry found in a most unexpected place