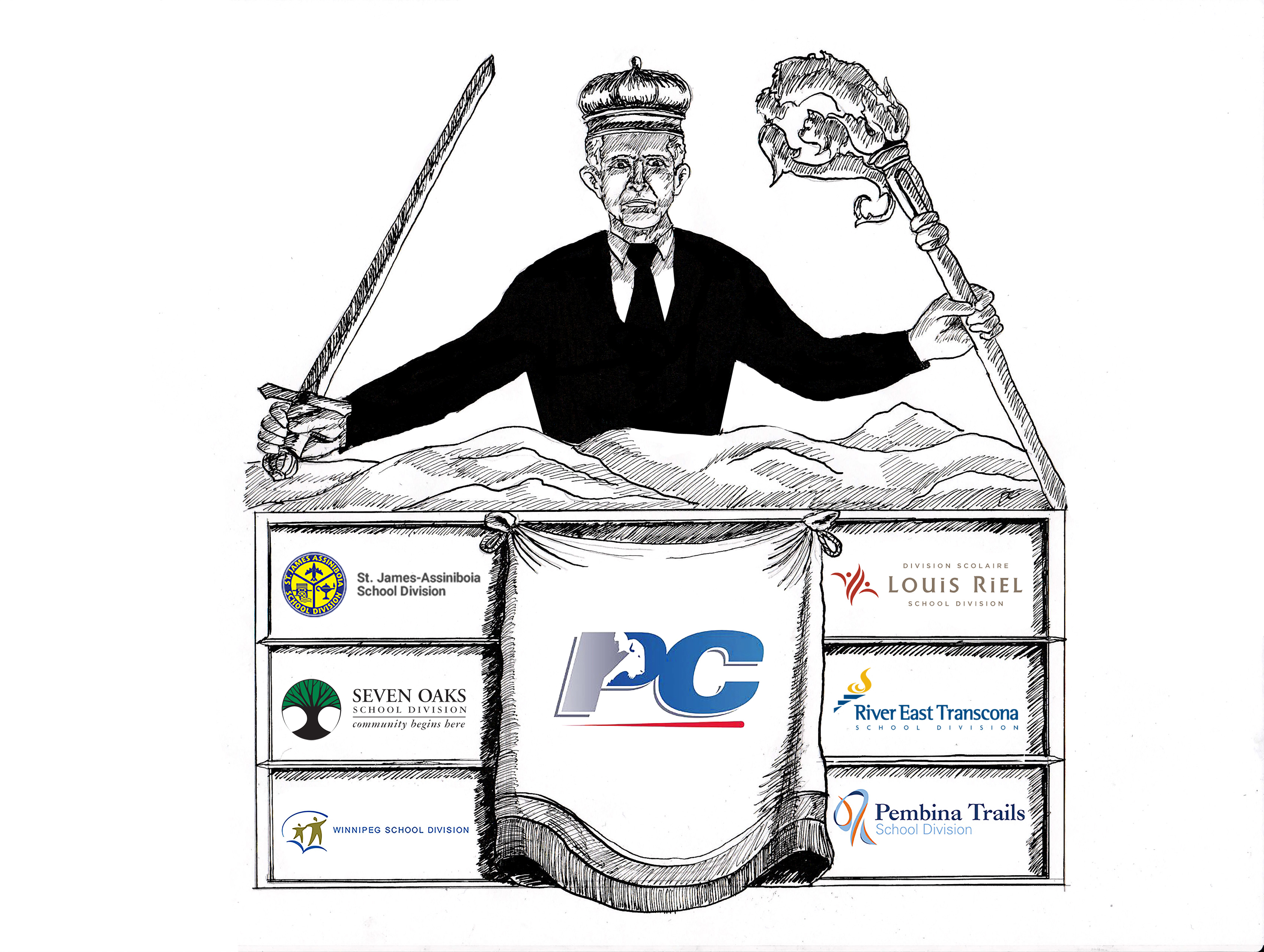 In 2019, data collected from the Organization for Economic Co-operation and Development — an intergovernmental development group — indicated that among all Canadian K to 12 students, Manitoba students scored the lowest in math, science and second last in literacy. Following this, then-minister of education Kelvin Goertzen launched a commission to review to detail the province’s lagging education system. The commission’s report was released on March 15, alongside the Education Modernization Act, Bill 64, and was met with fury and indignation from Manitoba teachers and administrators.

The commission was tasked with improving student outcomes and “creating long-term sustainability.” To that end, a core component of the proposed reforms is the amalgamation of Manitoba’s 37 anglophone school divisions into 15 regions by 2022. Currently, each school division has its own board of trustees and supporting administrative staff. The Better Education Starts Today report claims that despite Manitoba spending the most per student out of any other province and having a robust school trustee system, our student outcomes remain among the worst in Canada.

Taken at face value, this seems like a reasonable idea for reform. Simplify the existing system down into a more manageable set of divisions to pool resources, and then pour the money saved into classrooms, education assistants and extra-curricular programming. A lovely thought, but ultimately a fantasy.

It appears the eventual goal of Bill 64 is a massive partisan takeover of education in Manitoba. Consider the proposed administrative bodies, the provincial education authority (PEA) and provincial advisory council on education (PAC). The PEA will “oversee the delivery of education” in conjunction with the PAC. The PAC is comprised of 15 members elected from within the 15 new regions and aims to “provide the minister of education with direct parental advice on matters relating to the education system.” The PEA will be comprised of members appointed by the provincial government, two parent representatives appointed by the minister of education from the PAC and an additional elected trustee from the division scolaire franco-manitobaine (DSFM). The DSFM will remain largely unchanged by the reforms save additional reporting requirements to the government of Manitoba.

The proposed amalgamation collapses school divisions that service regions that historically support the Liberal party and New Democratic Party (NDP) and leave intact regions that service conservative strongholds. There has been little care taken to account for geography or population.

To illustrate, Winnipeg’s post-amalgamation region would contain an overwhelming majority of Manitoba’s K to 12 population — around 100,000 students not counting the DSFM. Winnipeg generally votes NDP, especially the inner city. The Winnipeg school division mainly services the inner city has the highest student population out of any division at 32,743 students with the closest runner up being River East Transcona at 16,851. All six existing divisions in Winnipeg will be collapsed into one region, with only one representative on the PAC.

The geographically massive frontier school division, which services the majority of northern Manitoba, is being amalgamated with the Kelsey, Flin Flon and Mystery Lake school divisions. The three provincial election ridings contained in that area, Flin Flon, Thompson and Kewatinook, voted overwhelmingly for the NDP in the 2019 election, and have generally voted against the PCs since 1999.

There has yet to be a clear articulation as to why the regions were devised this way. In a press conference on March 15, Cliff Cullen claimed the regions were merely laid out geographically. However, Cullen’s statement is confusing considering the map of the proposed regions. The Seine River school division will be left untouched by the consolidation plan and forms an encircling of two-thirds of Hanover. Brandon, meanwhile, is sandwiched between the proposed region of Beautiful Plains, Park West and Rolling River to the north and Fort La Bosse, Southwest Horizon and Turtle Mountain to the south. The proposed regions in contrast to Manitoba’s regional health authorities are starkly different which brings to question the integrity of Cullen’s claims.

Representatives in the PAC will overwhelmingly come from steady conservative ridings. The proposed structure of the PAC will inevitably and disproportionately privilege conservative voices in the oversight and delivery of Manitoba’s education system.

During the Monday press conference, a reporter from the Steinbach Carillon gave the game away by asking, “In regard to the roles that are appointed, if the NDP forms the next government [and] they could appoint these people in conservative regions, what will this new plan offer conservative parents skeptical of some progressive trends?” The PAC may be structurally biased in favour of conservatives, but the nature of the PEA appointments makes their domination of education contingent on staying in power.

However, the school community councils (SCC) will likely serve as a potential power check on progressive agendas. The SCCs are meant to “engage parents” at every school and “advise the school principal on school matters, including the needs of the community it serves.”

Consider this in conjunction with the fact that, under Bill 64, principals would be excluded from the Manitoba Teachers’ Society — their associated union. The degree to which SCCs can influence principles is both troubling and unclear. Effectively, without union protection, principles would be massively vulnerable to community pressures.

Consider the massive backlash from parents in Ontario in 2015 regarding changes to their sex-ed curriculum. Parents threatened to pull students from schools in protest to the changes which would teach children about puberty, sexually transmitted infections, consent, sexual orientation and gender expression.

Sexual education is clearly controversial but is essential in protecting students from unplanned pregnancy, safe sex and stigma surrounding gender and sexuality. Manitoba is still experiencing a massive syphilis outbreak and has the fourth highest teen pregnancy rate in Canada. Is it in the best interest of students to put access to this important information in the hands of reactionary, unqualified members of SCCs and the overwhelmingly conservative PAC?

Not to mention the obvious class issues that threaten this model. It is an unfortunate reality that due to time constraints, most parents lacking substantial socioeconomic resources are restrained from their participation in their children’s education. Poor families that work multiple jobs, physically demanding jobs or jobs at odd hours will likely be structurally excluded from participating in these councils by the very nature of their economic circumstances. On the other hand, two-parent and single-income households that have more time for civil participation will inevitably be overrepresented.

Manitoba has the highest rate of childhood poverty in two-parent households out of any province in Canada. According to educators, poverty is likely what has been impacting Manitoba’s K to 12 education scores.

The Better Education Starts Today report fails to mention any program to meaningfully alleviate poverty at the school level. Instead, impoverished students are left with partisan bodies and all the blame for their province’s failure to care for them.

Manitoba commits to child-care spaces, but not workers
23,000 new spaces will fail without proper incentives to entice workers