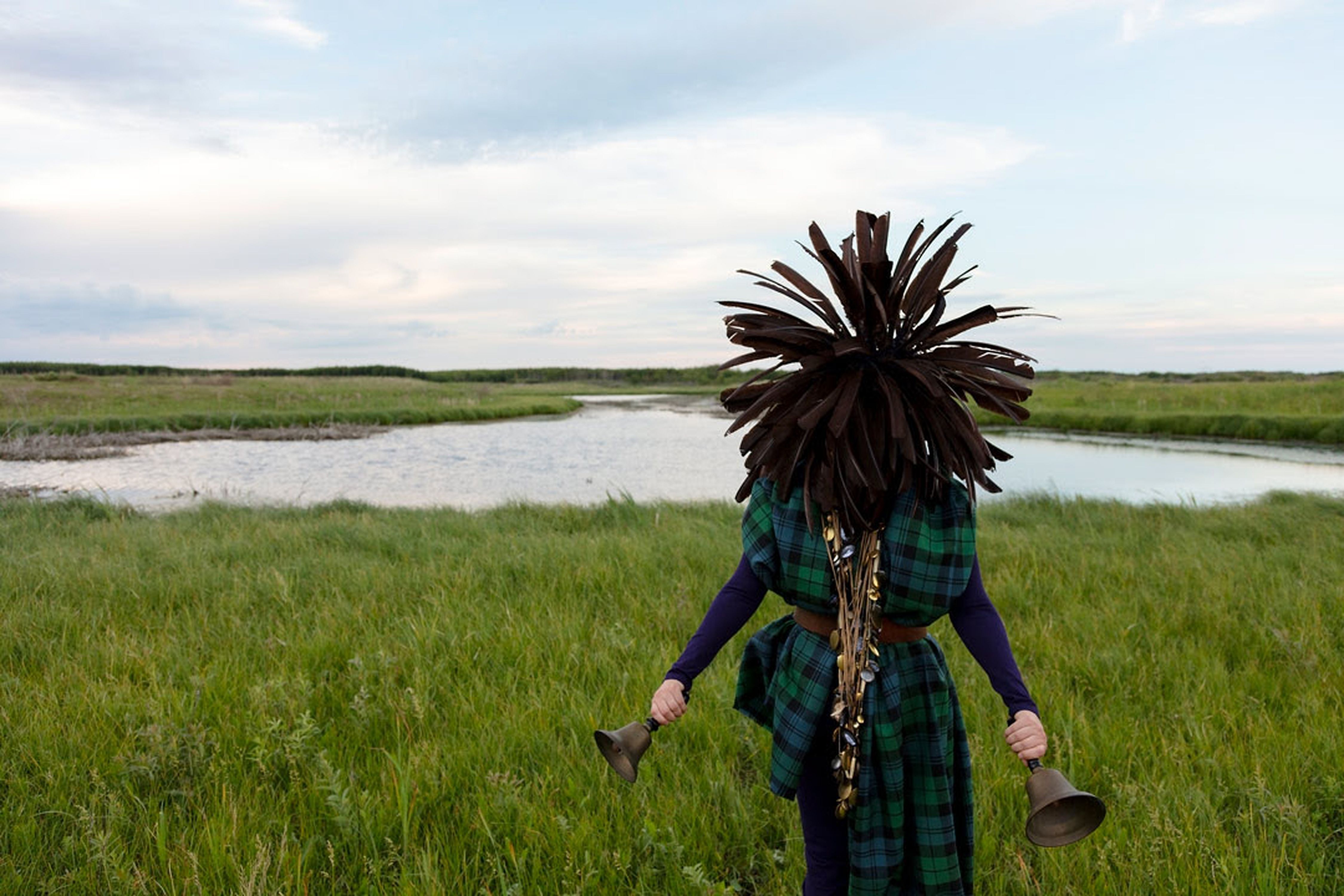 Constructing identity through history, lineage and culture is at the heart of Meryl McMaster’s practice. It is also the main focus of As Immense as the Sky, her current exhibition on display at the Urban Shaman Contemporary Aboriginal Gallery.

Coming from a Plains Cree and European background, McMaster began creating the body of work through an interest in travelling to places where her ancestors once lived and how this informed her own identity. From here, the idea grew into a more in-depth exploration of her family history through the wisdom, stories and the meaning these landscapes held for her ancestors — both as settlers and original inhabitants — as well as the mark that current generations are leaving on the planet and the different ways we perceive time.

“I was really interested in listening and collecting this knowledge of these stories and animating this and retelling it, through this personally transformative kind of process of my images,” said McMaster. “A lot of these stories that I was listening to took place at these kind of contact places of Indigenous and European ancestors, but then also they were stories that were specific to my Plains Cree culture and they were their stories of the land.”

As Immense as the Sky consists of large-scale photographic prints next to brief poems written by the artist that depict McMaster in surreal costumes and props that she makes herself within immense and beautiful landscapes. The scale of these images lends an ethereal, immersive feeling to the works, and the short poems add further texture to her dynamic photographs.

McMaster’s artistic process is unique in the sense that there are sculptural and performative elements that are entirely absorbed into her final images. Her performances, which are her transformation into these dreamlike characters in seemingly distant locations, are completely private. Additionally, she doesn’t consider her sculptures to be stand-alone additions to be displayed alongside her photographs.

Using an eclectic range of materials, McMaster’s otherworldly sculptures are often worn or used as props for her images. For instance, in “On the Edge of this Immensity,” we see McMaster carrying a small boat filled with birds, lending the work a lyrical and surreal energy.

Regarding the reason why she doesn’t exhibit these sculptures on their own, McMaster said, “they’re part of the artwork itself, which is the photograph. When they’re on their own they kind of lose their kind of magic […] they’re built and meant for the image.”

McMaster’s photographs possess a distinctive, fantastical style that blend the elements of theatre, landscape and fashion photography into one fascinating creation.

This innovative combination is particularly prevalent in her works “Of Universes We Have Just One” and “What Will I Say to the Sky and the Earth I and II,” which focus more on sculptural costume aspects rather than props. These photographs are composed beautifully, harnessing ideas surrounding environmental devastation and universal connectedness with strikingly unique energies. McMaster has expertly balanced the figurative aspects with the landscapes in these works, creating a cohesive world for these characters to inhabit while simultaneously telling the stories behind them.

The ethereal nature of McMaster’s work solidifies the questions she raises about conceptions of time in her work, as it removes the viewer’s outlook from the plane of reality with which we identify and into an unfamiliar world.

When viewing As Immense as the Sky, I often felt like I was seeing various glimpses into a history that were just beyond the grasp of my complete understanding — places I had been before and yet had never seen but were impactful in a way that made me want to sit with and learn from them. This feeling likely stems from McMaster’s inclusion of how her differing cultural backgrounds perceived time as either cyclical or linear.

These different perspectives on time are what eventually led McMaster to her thoughts on the impact we are currently having on the planet, and why she sought out these places of ancestral wisdom to confront and relieve these fears.

Unless the viewer comes to this exhibition familiar with the symbolism and stories from which McMaster pulls her inspiration, it can be difficult to discern exactly what each work is about — however, this is what McMaster intended.

“There’s little poems that are beside the image that are a little bit [of a] portal into some of the ideas behind the image,” McMaster said, “but I hope people can read those and it might trigger their own memory of history or even their own lived experience.

“I also really welcome the interpretation of others and for people to let their mind[s] wander and maybe dream a bit and kind of go down their own path in any of my works […] I hope people can think about these really beautiful landscapes, but also think about the forgotten landscapes that you pass by every day.

“Sometimes you forget to look at the beauty around you.”

You can catch As Immense as the Sky at the Urban Shaman Contemporary Aboriginal Gallery until April 17. For more information, please visit urbanshaman.org.