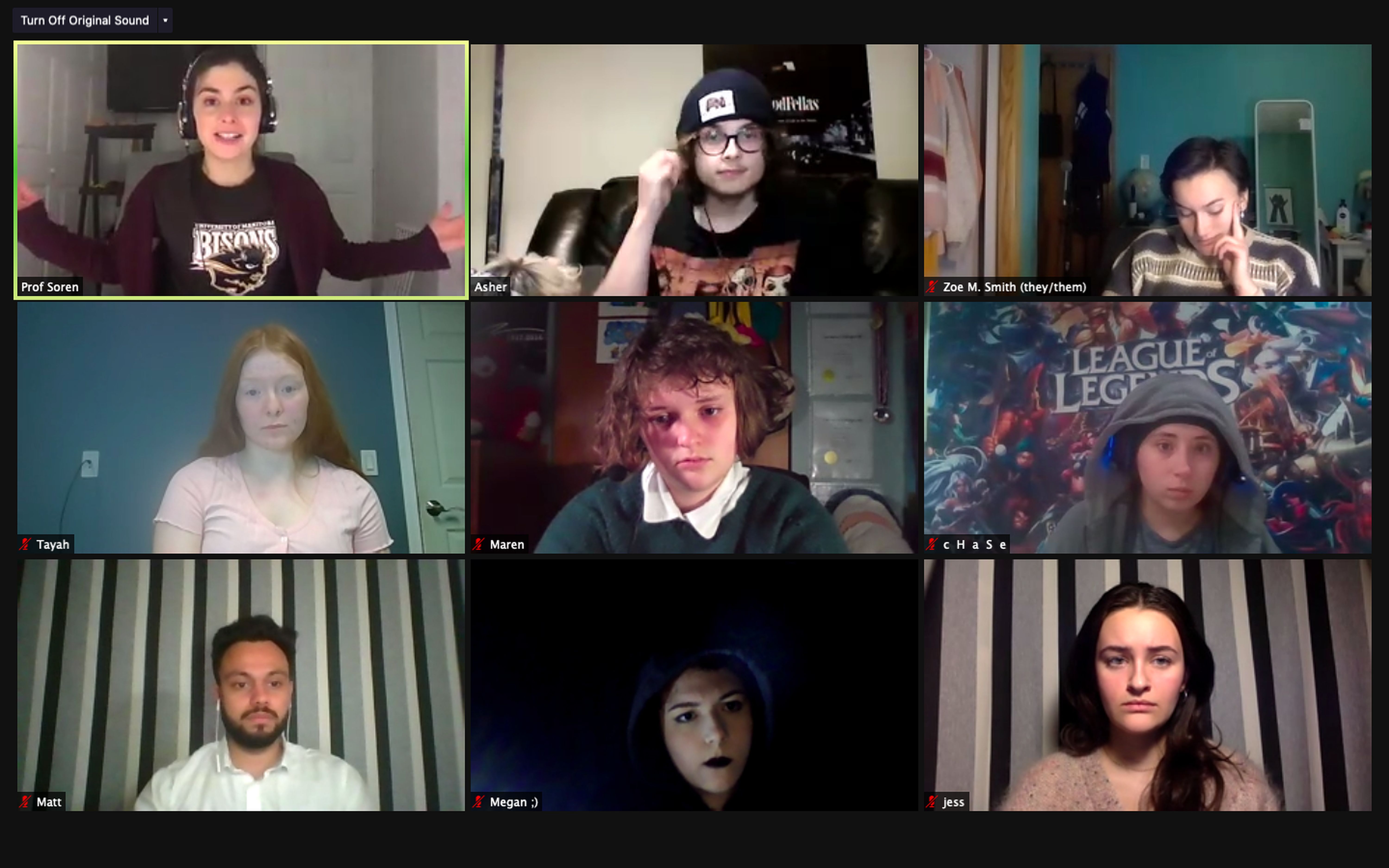 Image provided by the University of Manitoba's Theatre Program.

The University of Manitoba’s theatre program is jumping on the virtual theatre bandwagon and is presenting its first, and only, mainstage show via Zoom. Unlike most digital offerings, though, the original play — titled Zoom Lens by Winnipeg theatre artist Debbie Patterson — was uniquely written for the platform.

Directed by Katrina Dunn and with dramaturgy by Bill Kerr — two professors in the department of English, theatre, film and media — Zoom Lens takes place during a lockdown and follows a group of university students taking a brand-new online course, “Cultural Representations of Pandemics,” which is being taught by a struggling professor.

The production is very much a collaborative effort that, Dunn said, grew out of “a year-long, program-wide focus on new play development” that ran throughout 2019-20, with Patterson teaching playwrighting, Kerr covering dramaturgy and Dunn instructing an advanced directing class that focused specifically on directing fledgling productions. The project concluded with the theatre program’s Fire in the Hole festival, which ran last December.

Dunn said that, in addition to Fire in the Hole, the process culminated in commissioning Patterson to write a new play that “the whole group of students that had gone through [the] focus on new play development would also get to develop.”

They are not the only students involved in the production either. The students in the upper-level theatre course, “Theatrical Techniques: Backstage,” are primarily handling the technical and design aspects of the production, such as stage management, costuming, props and sound.

Unlike Fire in the Hole, which was a series of staged readings — meaning the actors still partially read from their scripts — Zoom Lens “is very much a full production,” said Dunn. “The actors are off book, there are design elements, there’s music […] it’s a fully rehearsed production from start to finish.”

Every aspect of the production has taken place online. Instead of holding in-person auditions, Dunn said that students videotaped their audition pieces and sent them along for consideration. Dunn, Patterson and Kerr did the casting together but, with this digital mode, she felt there was no real connection between them and the auditionees.

“What you get to see is the actor’s craft and how far along they are in what they’re doing, how they connect with a character, you get a sense of what kinds of things they’re comfortable playing,” said Dunn. “But you lose a lot. You don’t [get] to feel out the rapport between yourself and the actor. You don’t get to generate ideas with them. And the most important part, I think, is that you don’t get to give them a direction and see how they respond to it.”

The production’s rehearsal period ran for approximately two months and was conducted entirely on Zoom. Though much of the process remained the same, there were, predictably, some key differences that came with the medium.

“One of the things that I was really tracking as a director is: how does focus work [and] what is our eye drawn to?” said Dunn. “We have a lot of big group scenes where there are nine squares on [the screen], and we have to look from one character to the other and follow a train of thought and a storyline, and that’s very different from how it happens on stage.”

Further, Patterson’s writing style incorporates “very short, sharp dialogue with lots of characters cutting each other off and speaking at once,” but this effect is difficult to capture through the digital medium and having the actors’ movement restricted to a small onscreen box was challenging.

“One of the main ways that we tell stories in the theatre is through movement in space and we just do not have that in any kind of way,” said Dunn. “You have a little bit of play in space, from what you can see in the square, but beyond that, it’s pretty limited.”

“I found myself trying to define a whole new set of rules for how we express and communicate in this new form.”

Zoom Lens is Dunn’s directorial debut with the theatre program. Though she has directed productions at other institutions and professionally, this is the first time she is working with students that she has taught over a long period of time.

“I, like the students, [am] just grateful to be making art in any way — it is energizing. Also, working in this context, you get to see students really grow and develop and experience breakthroughs, and that is very exciting and satisfying.”

Dunn believes that the play is incredibly relatable amid the COVID-19 pandemic and will hugely resonate with its audience, especially the university students and faculty who have been going through it this past year.

“The way we teach, the way we learn, has all been compromised and adapted and we’ve changed enormously,” she said. “We’ve found very creative ways to do the things that we can’t do anymore, but we’re all working so hard — this play has a lot to say to everybody who’s been through that process.”

When asked about the theatre program’s plans for next year, Dunn is optimistic that there will be a return to more regular programming, with more productions being mounted.

“Everybody will be so hungry to get back to doing our work in the way that we’re accustomed to […] so, that is the next thing — coming back from the summer with renewed excitement and theatre activity.”

You can catch the U of M Theatre Program’s virtual production, Zoom Lens, from March 24 to 27 at 8 p.m. nightly and completely free of charge here: toban.news/zoomlens. For more information, please refer to the program’s social media channels.