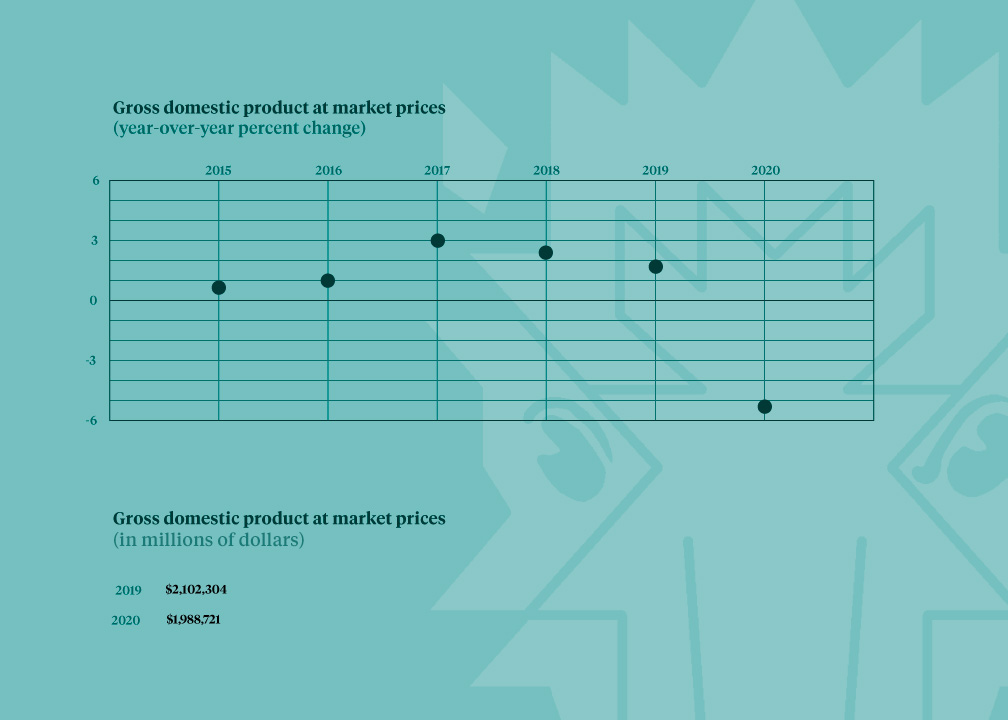 Statistics Canada has released the quarter four data on the Canadian economy for 2020, giving an overall picture of how the country performed throughout 2020 — a year rocked by the COVID-19 pandemic and economic uncertainty.

The numbers show that although real gross domestic product (GDP) grew by 2.3 per cent in the fourth quarter of 2020, the year saw an overall decline of 5.4 per cent. The decline represents about $113.6 billion in lost economic activity throughout the year.

Real GDP is the most common measure of an economy’s performance, representing the total amount of goods and services produced and sold over a given period of time — it includes the value of everything produced for sale from fast food burgers to construction on skyscrapers.

However, GDP is not the be-all and end-all of economic measures, as it does not account for the value of non-market labour such as the care work usually done by family members in the home.

Further, the household saving rate — how much of disposable incomes are saved instead of spent — remained firmly in the double digits throughout most of 2020. The quarter-four saving rate was 12.7 per cent, up 10.7 percentage points from quarter four’s 2.0 per cent in 2019.

According to U of M head of economics Ian Hudson, while a shrinking GDP does indicate some level of economic turmoil and uncertainty, the quarter-by-quarter metrics show some responsiveness to the lockdown measures put in effect across the country.

With more stringent lockdowns, economic activity greatly decreased — driving down GDP — but it also recovered to an extent as the measures were lifted.

“What that drop [in real GDP] signifies, is simply the combined very, very negative impacts of both COVID as a disease and the […] measures governments have taken to try and prevent its spread,” Hudson explained.

“The good news […] is that this is a direct result of a very specific problem, which is COVID and the government’s lockdowns as a result of COVID.”

Hudson said the extent to which this economic hardship endures is linked to how much longer the COVID-19 pandemic remains an issue.

“This problem could potentially […] go away very quickly,” Hudson said.

“This is not a situation like the 2008 crisis where you’ve got people losing their houses […] it is not that kind of long-term problem.

“It is a problem that […] could be very short-term, depending on what happens.”

In 2008, the U.S. financial system broke down with disastrous effects for economies internationally in the following years, including Canada.

Low growth rates characterized the highly developed capitalist economies in the years that followed, leading American economist Robert Gordon to declare in 2016 that “U.S. economic growth is over.”

Navigating the economic turmoil of 2020 as a student

Generally, contraction of GDP — such as in a recession — is associated with increasing unemployment rates, which have also fluctuated over the last year. The unemployment rate for full time students aged 15 to 24 was estimated by Statistics Canada to have hit as high as 39.2 per cent in May 2020, early in the pandemic, and dropping to 25.8 per cent by August.

For Hudson, the job prospects for students — many of whom work in the service industry — this summer rely on how quickly the vaccine rollout happens and whether people decide to resume normal life, patronizing businesses as they normally would, or if people generally take a more cautious approach and continue to stay home.

“Right now, it’s all about timing and the problem is that time’s running out,” he said. The “term ends [in] April, exams are over two weeks after that […] so we’ve really got two months […] to roll out a vaccine and open up the economy before students start looking for work.”

In a March 5 briefing, the co-lead of Manitoba’s vaccine implementation task force Johanu Botha stated that Manitobans can expect to be vaccinated as early as mid-May and as late as the end of June.

“What these GDP numbers tell you is that if we have to maintain the kind of lockdown over the summer that we’ve maintained over the winter and spring, it’s going to be terrible for students looking for jobs,” he said, adding that if the vaccine rollout goes smoothly and the economy opens back up, there is the potential for employment to pick up again.

Amid declining GDP, cause for optimism is to be found in the unusually high savings rates of Canadians throughout 2020, which historically have been “really, really low,” according to Hudson.

“What that tells me is that people […] actually do have money that pre-COVID they were spending, but now they’re not,” said Hudson. “So, there is this pocket of money that could then be spent if people were a little more confident about the economy and if they were allowed to go out and spend it on services.”