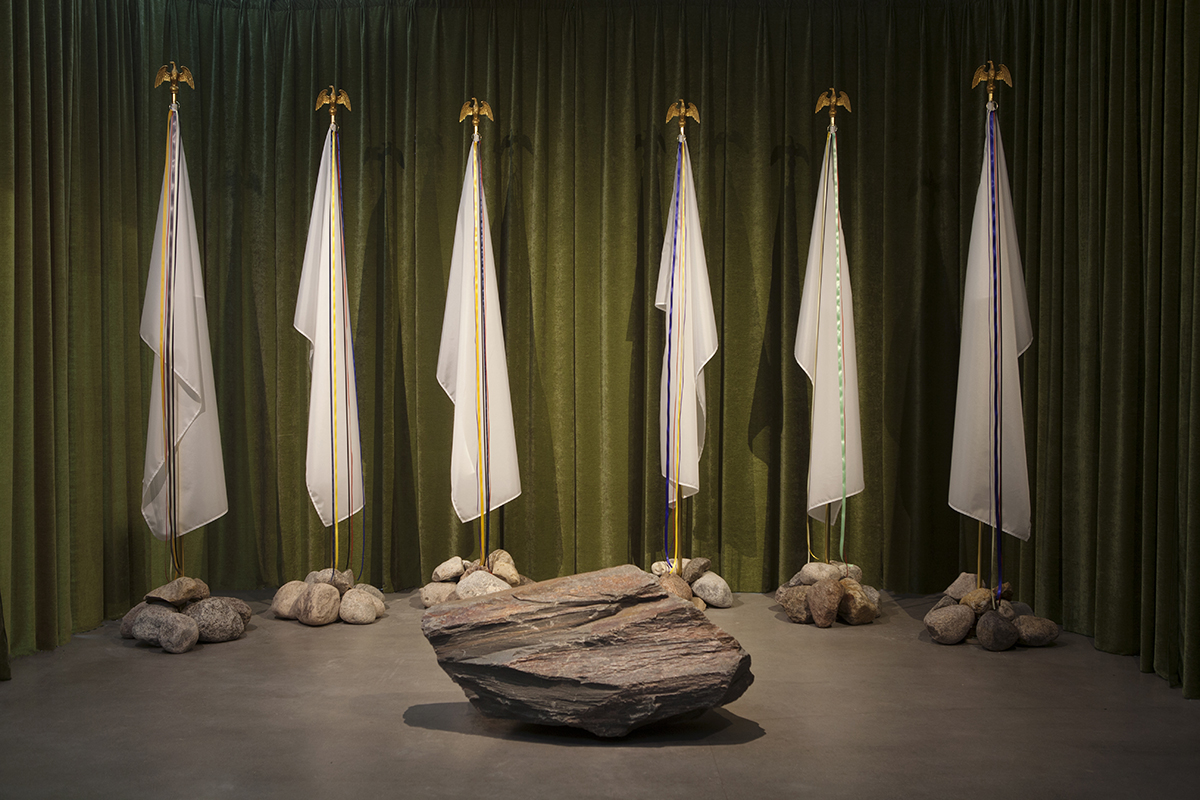 Image provided by the Plug In Institute for Contemporary Art & photo by Karen Asher.

Since her emergence in the Canadian art scene, Blondeau has worked in many areas of the art world as a curator, the executive director of the Indigenous art collective TRIBE and much more. But, above all, she is an artist who has been vital in creating action toward the “ever-increasing centrality of Indigenous art and knowledge production in Canada” and has used her intelligence, humour and vulnerability to create critical artwork that tells viewers important yet often ignored stories, challenges stereotypical representations of Indigenous women and speaks to the resilience of Indigenous peoples.

Upon entering Plug In, the first things to note are the sounds of speech, thunder and trains emanating from the exhibition space dedicated to I’m Not Your Kinda Princess. These noises set the tone for the works, constantly changing the energy from ominous to reverent to exciting.

The show is split into two areas, so I first entered the one on the right through a pair of tall, dark glass doors, which contained the main gallery space and the bulk of Blondeau’s featured work.

Passing the iconic “COSMOSQUAW” on the way in, I proceeded down a short hall to reach the main space where large-scale prints of Blondeau’s works “Grace” and “Asinîy Iskwew” hung amidst photographic documentation of “States of Grace,” a backlit print of “Lonely Surfer Squaw” and a large video screen displaying video documentation of three performances by Blondeau.

These three videos — titled “COSMOSQUAW,” “Sisters” and “States of Grace” — represent samples of Blondeau’s performance work over the course of nearly a decade and align with the other bodies of work presented in the exhibition. Additionally, all three of these performances have strong audio components, providing what felt like a soundtrack of music, voice and hammering to their printed counterparts.

While Blondeau is an interdisciplinary artist, her performances are where her humour, wit and passion truly shine — though the running time of the videos featured in I’m Not Your Kinda Princess is over an hour, they entrance with their liveliness and bluntness, and I returned to watch and listen to their softly spoken stories, enigmatic sounds, familiar melodies and ASMR-esque action noises.

In the second room stood Blondeau’s most recent installation piece, “Stones From My Kokum’s House.” While the work’s title may imply a wistful message, it is difficult to know what you are about to walk into when approaching this installation. From its entrance, all that is visible is a heavy, green velvet curtain, with ambiguous sounds akin to rolling thunder and vehicles seeping from behind it, providing a strange sense of foreboding while walking in.

At the far end of this space sits a large boulder, framed by a semicircle of six white flags with various coloured ribbons hanging from them and weighed down by piles of stones. In this formation, there is a certain stateliness to the objects presented — these stones and the flags that towered over them commanded attention, stating their presence in an authoritative, yet nostalgic and sacred way. In conjunction with the installation’s audio, consisting of a rumbling rainstorm that grows from a drizzle to ominous thunder only to fade away into road noise, the arrangement of these items and the heavy curtains that shielded them and the viewer away from the rest of the world made for a powerful work, even while keeping the exact significance of these objects ambiguous.

I’m Not Your Kinda Princess is truly a wonderful survey of work from one of Winnipeg’s most influential artists and a must-see for those both familiar with and new to our city’s art community. Blondeau has not only helped define Canada’s contemporary art scene on an international scale but has blazed a trail for Indigenous artists in the Prairies to continue in her footsteps and set a standard of excellence in the frankness, brevity and intelligence for artists nationwide, all of which is expertly showcased in I’m Not Your Kinda Princess.

I’m Not Your Kinda Princess will be on display at the Plug In Institute of Contemporary Art until June 19. For more information, visit plugin.org.