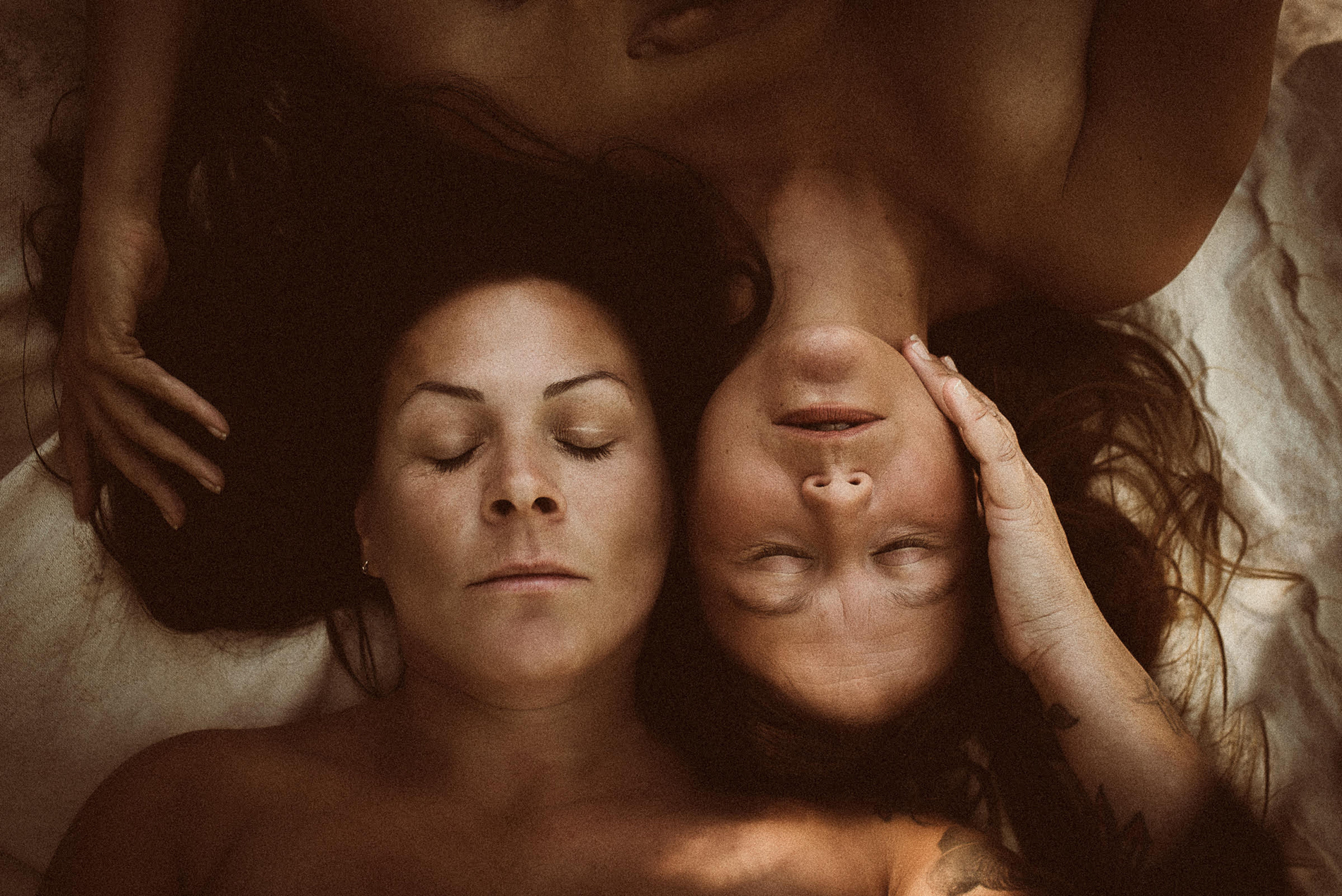 Image provided by the PLATFORM centre.

Small gatherings, one of the latest exhibitions on display at the PLATFORM centre for Photographic and Digital Arts, has an aura of sanctity about it. Featuring new work by Anishinaabe artist Jaime Black and Kinonjeoshtegon First Nations artist Brandy Bjarnason Bloxom, small gatherings focuses on collective culture and the relationships between the artists, the land and each other.

Upon entering small gatherings, there is a sense of warmth, intimacy and life that emanates from the works displayed.

Bloxom’s works are displayed in the first section of the gallery facing the entrance, with Black’s on the opposite side of the room. While it might have been nice to see work from both artists mingling with one another, the choice to hang the works this way is successful — particularly for Black’s work, which is arranged to create an effective seasonal narrative.

At the back of the first gallery is an entrance leading to a smaller, dimmed room with vaguely human silhouettes covering the walls and a clay pot sitting in the middle of the floor. This intriguing installation, created by Black, is called home, body/home, land, and gives the impression that one has entered a sacred space.

Made during a ceremonial-like performance, Black created a video of home, body/home, land’s creation, which is available on PLATFORM’s website to view. The installation also features the only image in the entire exhibition of Black and Bloxom physically together.

Dozens of readings could be taken from this work, but ultimately, home, body/home, land provides the viewer with a captivating and thought-provoking perspective on our connection to the land, its histories and questions of authorship that have been often raised in art history.

As for Bloxom’s work, her use of colour and negative space suggests the idea of individuals being a part of the grander workings of nature and it truly feels as if her photographs are taking viewers on a journey, culminating with her work earth, wind, fire.

Earth, wind, fire is particularly impactful due to its balanced asymmetry and vivid colour palette. This striking image depicts an Indigenous woman standing in a field wearing a red dress that is on fire and conjures a strong emotional pull, especially considering how it echoes Black’s earlier work with the REDress project.

While the concept of a woman in a flaming dress might sound like an upsetting image at first, Bloxom said that earth, wind, fire is ultimately a ceremony of remembrance and renewal, and certainly, it feels more like a celebration of healing than a depiction of violence.

However, one of the most powerful pieces in small gatherings is casting, a large print by Black that depicted a white dress submerged in dark, swirling water. It is amazing how the dress falls into abstraction on approach and its movement creates the illusion of staring into real, churning waters.

Additionally, this work stands out because it perfectly encompasses one of the narratives that Black discusses in small gatherings — a healing journey rooted in the elements which finds resolution in the cleansing waters of the land we depend on to survive.

Both Bloxom and Black spoke about their experience collaborating with one another for small gatherings in a transcendent way, and this energy pervades the gallery space.

“Being in these difficult times with restrictions made this work challenging but at the same time our art just found each other and speaks the same language without us being together physically,” Bloxom said. “Even though we were apart, you can see the interaction, beauty and connection with the land and each other in these ‘small gathering’ days.”

As a viewer, the connection between these artists is evident in the beautiful echoing of their work throughout the exhibition — while walking through the gallery, it feels as if their artworks are having a deeply meaningful conversation with one another, particularly with photographs from both artists such as living memory I, II, III and leaving my mark, which utilize dual prints and impressions of faces and bodies on the landscape.

Bloxom is a self-taught artist mainly working in digital photography. Inspired by her First Nations background, Bloxom’s art practice explores her relationship to nature as well as her own positionality.

All of Bloxom’s photographs in small gatherings are self-portraits that she began when COVID-19 touched down in Canada and she was forced into isolation.

Bloxom said, “I needed an artistic outlet and found that hard without a subject. So, I became that, and it became an emotionally vulnerable space to share with the world.”

“My heritage has and will always be part of my art,” she said. “It is my healing journey given to me by the creator and my duty as an artist to share these stories and connections in this language form I was given.”

Black is a self-taught interdisciplinary artist who also explores positionality. Her practice is “grounded in an understanding of the body and the land as sources of cultural and spiritual knowledge” as well as the relationships between them.

“I’m playing with the idea of absence and presence,” Black said. “One of the really important themes is reconnecting with the land as a way of healing […] women relearning the traditional stories from the land and the sacred spaces is what’s going to heal us and move us forward.”

Small gatherings will be on display at PLATFORM centre until March 6, 2021. You can book an appointment to visit the gallery in person, or view images of the exhibition on platformgallery.org.