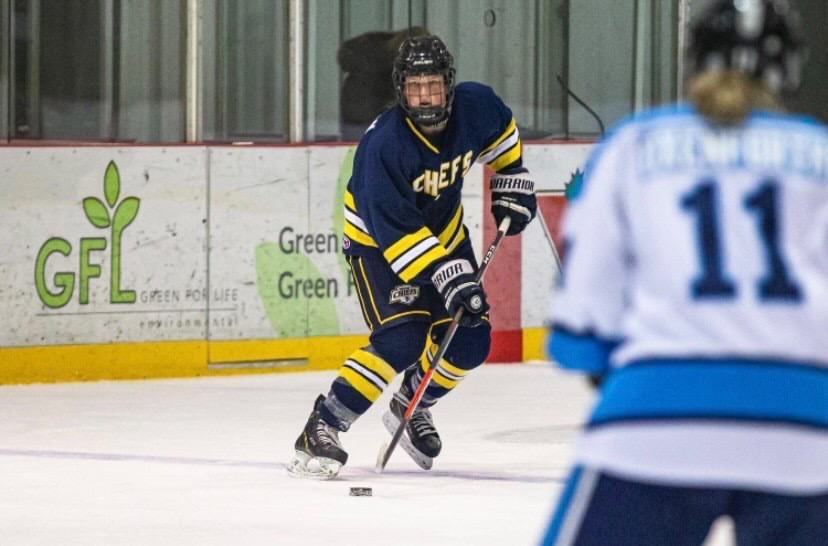 It’s that time of year again, when the next batch of young recruits join the University of Manitoba Bisons sports teams.

The newest recruit goes out to the women’s hockey team and they did not disappoint Bison fans, as the team acquired Louise Fergusson, an exciting player to watch.

Fergusson’s commitment to the Bisons was announced Feb. 2 and she seemed as ecstatic herself as fans ought to be. She said the team “seems like a good fit for me.”

“I’ve always wanted to play at a higher level and I really liked the school and program,” Fergusson said.

The 16-year-old defenceman out of Vincent Massey High School in Brandon, Man. played for the Yellowhead Chiefs and had a solid year with the team in the 2019-20 season.

She put up a total of 10 goals and 12 assists in 43 games for the Chiefs in the regular season and an additional five points in the playoffs. 22 regular-season points is an achievement for any player, but it is great for a young defenceman.

She was also second on her team in points this season before it was cancelled due to the COVID-19 pandemic.

Fergusson brings many different skills to the table — obviously, after putting up 22 points — but she has two specific traits that she believes make her a particularly good player.

“I’m an offensive defenceman and I work hard,” Fergusson said.

A player of high skill is a must for the Bisons as the team collectively put up only 34 goals in 28 games during the 2019-20 season.

Not only did the Bisons have the least goals in the league, but also were second worst when it came to being scored against.

The Bisons started off great with its recruiting by trying to address the problem that is at hand. A big, point-earning defenceman should help the team out in the offensive and defensive zone on the ice. Overall, Fergusson is a great recruit when it comes to filling a need on the ice.

University-level hockey was cancelled for the 2020-21 season and minor hockey in Manitoba was also put on hold and ultimately cancelled due to the pandemic.

Although this is unfortunate for the players, many are making the most of it, including Fergusson.

“Since the gyms have been closed for a while I’ve just been doing things in my garage that my trainer has sent me,” Fergusson said. “Along with skating a lot outdoors.”

“Other than not getting to play hockey this year, [COVID-19] hasn’t impacted me that much, as I’m only in Grade 11,” she said.

The young defenceman is set to make her Bisons debut during the 2022-23 season. This gives her plenty of time to grow as a player to be ready to make that jump to university level.

It also gives her a couple years to continue to grow physically. Fergusson already stands 5-9, which is very big for a female defenceman who is only 16 years old.

Bison fans have to wait a while until they get to see Fergusson in action, but if she is the type of player that she sets out to be, it will be well worth the wait.