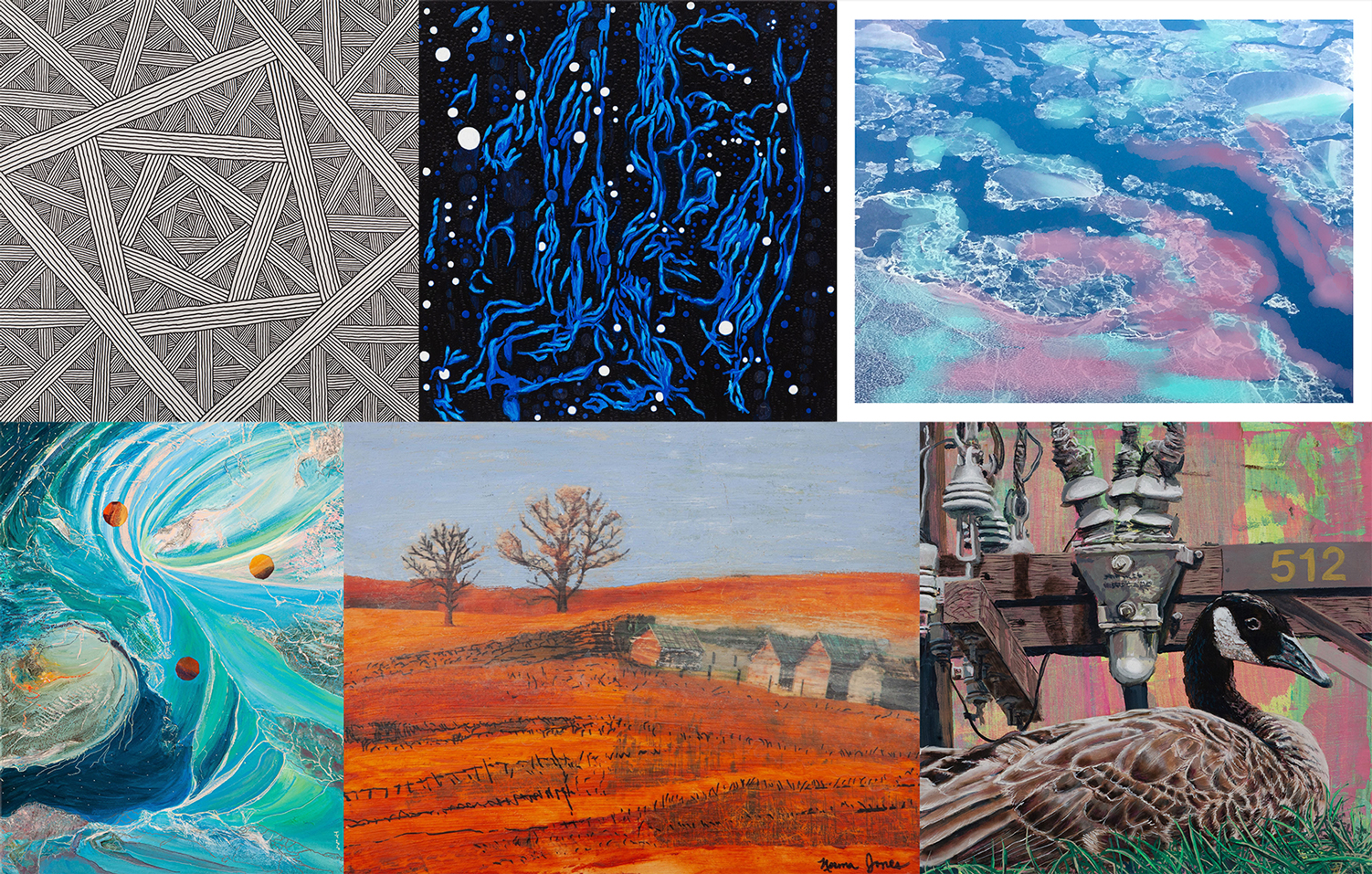 Artists are exploring what the concept of space means to them in an online exhibition through the cre8ery gallery. Featuring artwork from 17 local artists organized by executive director Jordan Miller, Space is an exhibition three years in the making.

On the theme, Miller said, “Space, as a word or theme, can have multiple meanings or contexts.” This is reflected in the artwork that makes up the exhibition. Using a wide range of mediums, artists touched upon a variety of topics that ranged from space exploration to the physical and psychological landscapes of everyday life.

Space offers us a refreshing view of the world around us through the eyes of these artists and allows audience members to visit the places that they’ve depicted — both real and imagined — through their artworks.

This theme is especially poignant considering the circumstances we are currently living in, where occupying physical spaces has taken on new challenges due to COVID-19 — something that has even affected this very exhibition.

However, many of the artists, such as Juanita Klassen, relayed that the challenges the pandemic has brought them were not much of an imposition because Miller did a fantastic job supporting them, promoting the exhibition and making it possible to hold it virtually.

“She has just been a lifesaver for so many of us artists,” said Klassen.

Klassen, an artist who has explored outer space throughout her career, works exclusively with acrylic paint on board. Her piece in Space, titled “Cygnus Loop,” is a portrait of the supernova of the same name located in the Milky Way.

Describing “Cygnus Loop,” Klassen said, “Images of it have the power to take me out of not only myself, but take me out of my house […] if I look at outer space then I’m never stuck.”

By building up many layers of paint, Klassen recreates these faraway landscapes in as exact detail as she can. “I want [them] to look as real as possible,” said Klassen, “like [they are] actually moving.”

Texture also plays an important role in Klassen’s work. In fact, she creates her work in such a way that she invites audiences to break one of the art world’s unspoken rules — don’t touch the artwork.

“I created [Cygnus Loop] to be touched and coated it so that it wouldn’t get damaged if someone touched it,” Klassen said. “I like that whole tactile, three-dimensional look, so that’s part of what I’m aiming for.”

Another artist featured in this exhibition is Jackie Turnbull, a self-taught abstract mixed media artist. In her works, “Cosmos” and “Space Time,” Turnbull explores the meaning of existence, identity and where we find our place in the universe.

“I’m a huge sci-fi geek, so my pieces were about space, outer space in particular,” Turnbull said.

Using acrylic paint, collage and other mediums, Turnbull’s vivid works emphasize organic forms to create imagery and movement that immerses the viewer in Turnbull’s abstracted space and gives shape and weight to the immateriality of the universe.

These works and the ideas behind them also reflect the artist’s intuitive painting style.

“Sometimes I don’t even plan [an artwork] out,” Turnbull said, “I just go for it.”

The next artist in Space is Norma Jones, a mixed media artist who incorporates acrylic paint, image transfers and sketching into her work, heavily inspired by nature and the landscapes of her childhood.

“The piece ‘Memories’ is about prairie farm life,” Jones said. “Through my life, many of the buildings and structures that existed have been torn down. They exist only in my mind.”

Jones pushes the boundaries between linear perspective and abstraction, saying, “I like to do a combination of playing with colours and space, but almost everything I create comes back to the natural theme.”

Craig began making art just two-and-a-half years ago as a way to destress from everyday life and often carries this into her works’ themes.

“A big intent behind the stuff I make is to not just brighten my own mood but for the people around me as well,” said Craig.

“Hyperspace,” one of Craig’s submissions to the exhibition, consists of straight, bold lines that criss-cross across the page. This piece was inspired by star tunnel imagery from movies set in outer space, which creates an extensive depth that spirals down into the center of the canvas.

Craig’s second piece, “Headspace Tangle,” depicts a brain-shaped maze also surrounded by bold lines. Regarding this work, Craig said, “I feel like it represents that way of you’re trying to make space in your own head and trying to get through all those thoughts, and it can be confusing and all that like a maze.”

Another artist with work in Space is Pamela Desmet Franklin, a multi-media artist who has been a long-time lover of art due to growing up in a family of artists.

Working in an experimental manner, Franklin utilizes ink, watercolour, collage and many drawing mediums in her work, but photography has been a major part of her practice and was the medium used for “Mining Martian Diamonds” and “Tears of the Moon,” her works featured in Space.

These ethereal works depict aerial views of surreal, atmospheric landscapes that seem to be taken from an otherworldly perspective.

“With the restrictions and isolation we’ve experienced since COVID-19, I’ve really come to rely on my imagination and creativity to keep myself company,” said Franklin. “I believe the photos express these themes […] I sensed being drawn into the computer screen as if those images were my entire world and felt like being playful with the idea of being alone and roaming the galaxy.”

Last but not least, Brian Longfield is a local artist who has worked in many different spheres of the art world over the course of his career. As an artist, curator and writer, Longfield has worked primarily in Winnipeg and London, Ont., predominantly focusing on theatre, performance and video installations. However, he has most recently returned to painting to explore layering using his own photographs as references.

Longfield explained that his paintings “Home Address” and “Grazing Couple” each have three layers — the abstract ground, the telephone poles and the Canadian geese — and relate to the concept of space in two major ways.

The first is that these works create a constructed space that illustrates a relationship between the works themselves and the constructed spaces that can be created through photography and photoshop.

“When I’m painting, I’m also kind of thinking in Photoshop layers,” said Longfield. “There’s a real relationship to photography in the work because it’s all work from my own photographs […] I kind of print them by painting them.”

For Longfield, the second major connection to space in these works is an ecological one.

“As humans encroach more into wild spaces and animal habitats, [Canadian geese] forced to come into our habitats more and more and sort of develop a way of living,” Longfield said.

“So, there’s also an element of space there as […] a shared space with wildlife that’s really interesting to me.”

To Break & To Build