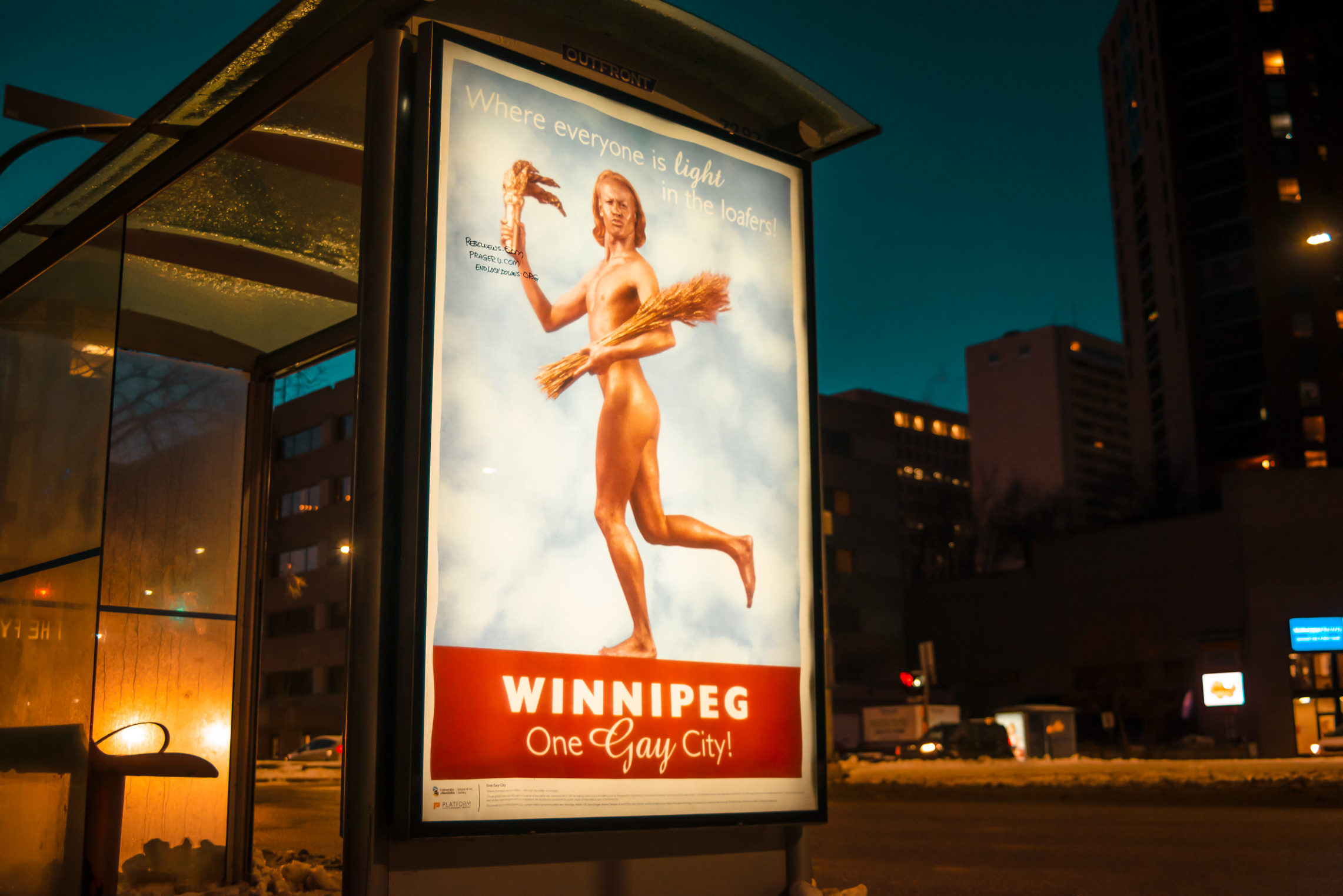 In the era of COVID-19, people are forced to entertain themselves in creative ways. Luckily, the Winnipeg art scene is still active — artists and their work are being featured in multiple online exhibitions, and artist talks and various projects and shows are putting out calls for submissions.

The long-anticipated public art exhibit, One Queer City by artist duo Shawna Dempsey and Lorri Millan, is finally being fulfilled this year in Winnipeg’s transit shelters as originally intended back in 1997.

The installation consists of six posters, each by different local artists, of cheerful Winnipeggers — including a toddler with their birthday cake, a fisherwoman with her catch and a boy dressed as the eponymous Golden Boy — alongside text reading “Winnipeg, One Gay City,” which is a reference to the city’s slogan “Winnipeg, One Great City.”

However, when this installation was initially created, the mayor at the time, Susan Thompson, refused to sanction Gay Pride Day, so the project was pushed to the side for decades because Dempsey and Millan were unable to get approval from the advertising agency due to the content. Eventually, the pair filed a human rights complaint and settled with the agency in 1999, the same year Winnipeg elected North America’s first openly gay mayor, Glen Murray.

This public work is on display until Feb. 14. If you are using public transit, keep your eyes peeled.

Another event is the online fashion exhibit, Inuk Style, held by the Winnipeg Art Gallery (WAG). It showcases a selection of beautiful, carefully crafted Inuit clothing and accessory pieces, created by multiple Inuit artists and designers across the Canadian Arctic and features works from the WAG’s collection and the Government of Nunavut’s Fine Art Collection.

The show was created to celebrate contemporary artists who create Inuit attire using traditional techniques passed down through many generations and is being held virtually until May 2 through the WAG’s website.

Also available online is the decorative art exhibition Simply Splendour, another collection by the WAG. The decorative arts are very important documentation of their time and demonstrate social custom, taste, style, class distinction and fashion of its time. The collection puts a spotlight on British and Canadian works, including over 4,600 beautiful pieces in a range of mediums from porcelain to silver, glass, ink and pencil drawing.

The intention of the exhibit is to celebrate the decorative art of everyday objects. It runs until June 13.

Ho-You’s interest in psychology, anatomy and memory has led her to explore embodied memory in her practice. In her artist statement, she describes this as “the idea that the human body physically records experiences and trauma in its cells, tissues and genes.”

“Recently, I have begun to examine the similar ways the environment and the human body processes and remembers trauma,” Ho-You said. “Paralleling the system of the human body to the ecosystem, my work attempts to compare how both the Earth and body retain deep forms of memory in the atoms, molecules and structures they are composed of.”

Inversion’s works are composed of mixed media such as etchings and bacterial culture that pose an intimate experience between the viewer and the work.

Open access to the exhibit begins Jan. 15 and closes Feb. 19. Additionally, Ho-You will be hosting a virtual artist talk over Zoom on Jan. 23 at 2 p.m.

Lastly, Aboriginal Music Manitoba (AMM) has created an initiative in collaboration with Urban Shaman Gallery to pay tribute to four residential school survivors who live in Manitoba. Indigenous artists have the opportunity to submit their work and have the chance to be chosen by the survivors to recreate their likenesses. Each selected painter will be granted $2,500 to cover the cost of supplies, studio space, materials and other necessary items.

The submission deadline is Jan. 21, and submissions must be sent online through Google Form, mail or fax — physical submissions will not be accepted.

Although the city is under strict restrictions at the moment, Winnipeg artists are still showcasing their talents for anyone and everyone to see.

The decade in prints