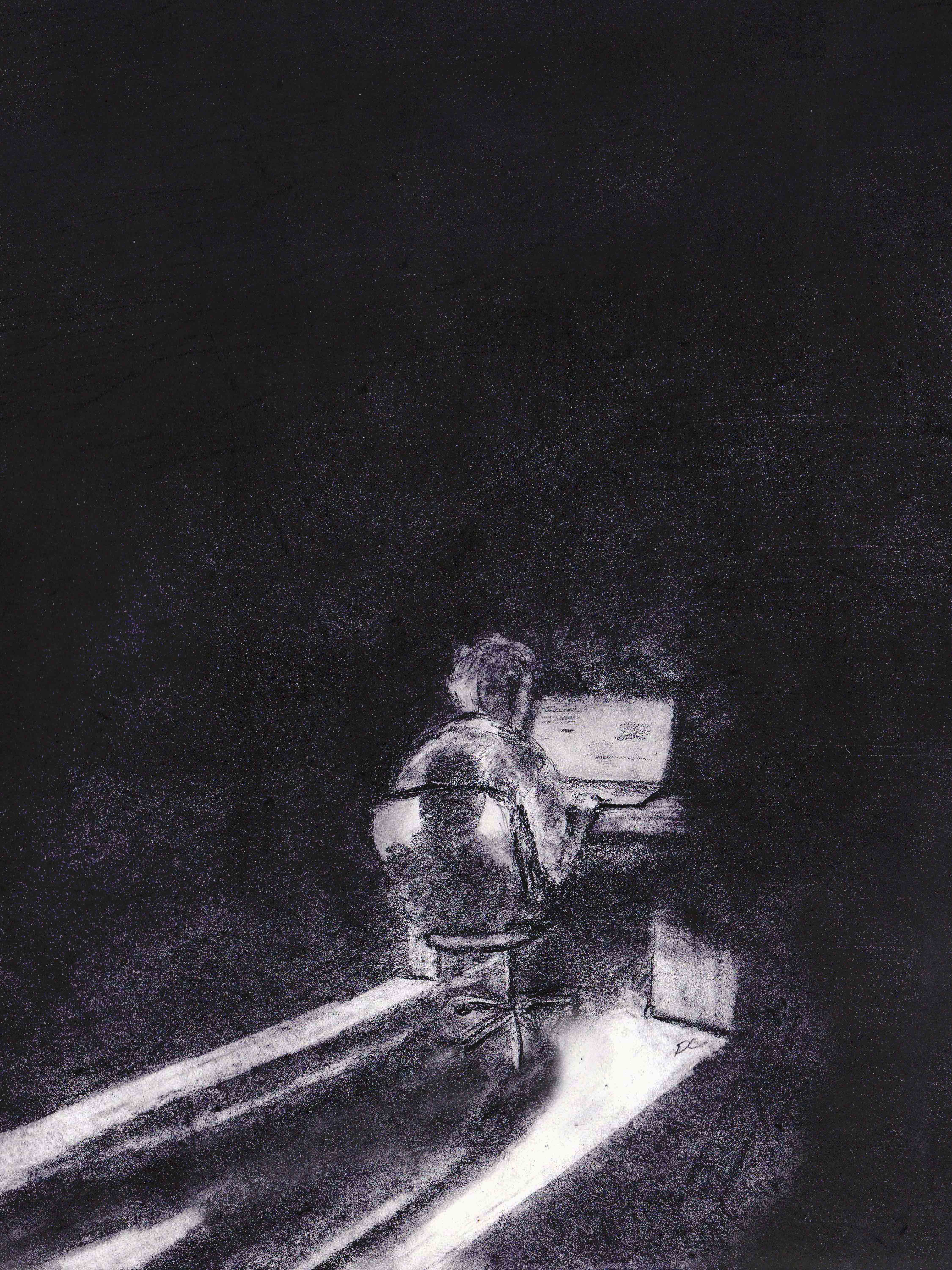 Jan. 27: A full statement from Austin Grabish has been included.

“Many people might find it ironic, even amusing, that a news organization that, as with any other major news outlet, is alerted to significant stories by sources who are granted anonymity, would be surprised and indignant that one of its own employees used the same technique to give a story about the CBC to another news outlet,” wrote arbitrator Lorne Slotnick in the decision of a CBC controversy earlier this month.

“I am one of those people,” Slotnick continued in the Jan. 12 decision.

I, too, am one of those people. As the Manitoban is in the process of developing our own journalistic standards to provide a framework to guide decision-making, it is important to compare how the more controversial applications of other newsrooms’ standards are applied to better understand our own.

Following Don Cherry’s infamous “you people” rant on Hockey Night in Canada in November 2019, Ahmar Khan — then in a temporary reporter position with the CBC — tweeted an opinionated response which CBC management asked Khan to take down. But it was not that alleged violation of the CBC’s social media policy for posting a passionate opinion on Twitter that resulted in his termination. Khan ultimately did remove the tweet, but not before unsuccessfully arguing how the selective application of CBC’s standards and policies were silencing the corporation’s journalists of colour.

Khan’s troubles escalated after this exchange. Khan’s tweet was later quoted in a Toronto Sun article, which noted Khan’s affiliation with the CBC. This ultimately sparked a pyre of hate mail through which Khan reported feeling unsupported by management. According to Slotnick’s report, following this incident Khan reached out to Canadaland and Maclean’s to start a “discussion […] about race and the CBC,” explicitly noting he would do the interview “as long as it doesn’t implicate [him].”

It was at the end of November 2019 that Khan’s colleague Austin Grabish, according to evidence submitted to the arbitrator by Khan, took a shared laptop off of Khan’s desk and discovered, after searching Khan’s Twitter and WhatsApp accounts that had not been closed, Khan’s communication with the other media outlets. The search also led to screenshots of Khan’s usage of a homophobic slur from a WhatsApp message prior to Khan’s employment with the CBC. Selective cropping resulted in a screenshot to imply that Khan had said their boss “looks real nice.” Further, private messages were dug out that expressed Khan’s frustration with the broadcasting corporation’s policies and management. Despite Grabish sending, according to the arbitrator’s report, the edited screenshots to their boss, Melanie Verhaeghe, she had not seen the accurate, unedited versions of the messages — in context and with dates — prior to Khan’s arbitration hearing.

Khan was terminated from his position in early December 2019 for the use of a homophobic slur, for the remarks made regarding management and for communicating with other news outlets regarding the CBC’s handling of their order for Khan to delete his Don Cherry tweet.

Slotnick’s decision mentioned that in the first matter, “this exchange of nonsensical messages among a group of 10 friends, none of them a CBC employee, predated Mr. Khan’s employment with the CBC and had nothing to do with his job.” Khan claimed that the slur was not used in a hateful manner but rather that he was mocking the very use of the word after his friends and himself came across a gregarious group from Surrey, B.C. and Brampton, Ont. Whether Khan’s alibi is true or not is unknowable — however, the messages still pre-dated his employment. In reference to the second matter, Slotnick concluded that “if employees could lose their jobs for privately criticizing their bosses — even if in crude terms — this country would be facing a severe labour shortage.” And in the third matter, Slotnick expressed that the communication between Grabish and Verhaeghe “suggest[s] a somewhat enthusiastic plan to cause trouble for an employee who was viewed by some fellow employees as a problem” and that “the grounds cited by the employer for Mr. Khan’s termination amounted to, at most, a minor indiscretion, and are far overshadowed by the breach of his privacy that enabled the employer to discover those activities.”

Slotnick ruled that Khan should be returned to his position for the four months that were left in his contract or compensated for those four months if he declines the position. However, crucial questions and lessons remain unanswered.

Grabish has claimed that he was obliged, under the CBC’s code of conduct, to gather the screenshots and forward them to management. What is clear from the corporation’s journalistic standards and practices is that the “use of production techniques is consistent with factual accuracy and fairness in our reporting.” Is it the letter or the spirit of the policy that is best followed?

Grabish’s alleged manipulation of the evidence, according to the arbitrator’s report, he brought to management could very well raise significant concerns about his integrity as a reporter at the CBC. Grabish was never asked to present evidence at the arbitration hearing and has said that the image manipulation was a “factually incorrect [detail] the arbitrator included.” However, management’s failure to rigorously fact check this evidence before terminating Khan is cause for concern. At best, this story displays insufficient oversight, but at worst it should raise questions about journalistic standards within one of Canada’s most touted newsrooms.

Being able to protect confidential sources is how news organizations are able to hear about, look into and bring issues of public interest to the fore. As Slotnick wrote, Khan’s “actions have caused no harm to the CBC” and “were motivated by a desire to spur discussion of an important public issue.” That is the very purpose for which confidentiality is enshrined in journalistic standards. Allowing “people with important information to come forward and expose matters of public interest” is of crucial importance. Exposing individuals who have chosen to remain anonymous is a direct contradiction of this very principle. How is trust built? And once built, how is it maintained with a readership and an audience? How is it eroded?

Of greater embarrassment to the CBC and its reputation should be the delay in revisiting and revising the standards their employees say are silencing them. Christine Genier, then-host of the CBC radio show Yukon Morning in Whitehorse, Yukon resigned in June, saying “We get told that it takes time to move a ship […] but it is costing us bodies.” In June 2020, the CBC’s editor-in-chief, Brodie Fenlon, wrote in a blog post that the CBC will be “looking at the [journalistic standards and practices] through the prism of inclusivity.”

Regardless of whether it is in light of, in response to or merely after Khan’s allegations that the corporation’s policies were selectively applied to silence his opinions, the standards and practices will be revisited. The unfortunate part is that it took so long to do so. As Fenlon wrote in June: “Can our journalists be active citizens of the world without compromising their objectivity?”

There are many questions to mull — these few may be among them. Not present is how to invade the privacy of your colleagues and employees.

Austin Grabish maintains “I never took the laptop off Mr. Khan’s desk. I grabbed it off my desk and had been using it daily for many months.” In a statement to the Manitoban continued that “I never manipulated evidence. I did not alter, edit, crop or change images in any way.”

CBC spokesperson Chuck Thompson issued a statement saying “Irrespective of where anyone stands on the arbitrator’s decision, the actions we took against Mr. Khan were not related to his tweet regarding Don Cherry.

“As was noted in the ruling, our actions were not considered discriminatory and there was no breach of Human Rights law. While we can’t go into specific details, context is important. Without having all the facts, people are unfairly characterizing Mr. Khan’s two colleagues on social media. They acted appropriately and professionally bringing information to the attention of senior management.”

A previously issued statement from Grabish reads:
“In November 2019, I opened a laptop I had been using for months at CBC, which I left on my desk. I noticed a WhatsApp screen that I was unfamiliar with and opened it.

“I was shocked and disappointed to see both a thread of misinformation about the CBC and several homophobic messages including a photo of two men with the words “JUST A COUPLA FAGS.”

“As a gay man, I know what it’s like to be marginalized and grew up repeatedly being the subject of regular homophobic slurs and bullying because of my sexual orientation.

“I was disappointed and hurt by what I found and reported it to my senior manager.

“I did not alter the images in any way. I also did not take the laptop from my former colleague’s desk — two factually incorrect details the arbitrator included.

“I’m disappointed I was never invited to testify at the arbitration hearing or given an opportunity to present the facts.

“As somebody who has dedicated my entire professional career to journalism, I value freedom of expression and appreciate the need for journalists to hold institutions accountable. Having said that, I had very clear professional obligations under CBC’s code of conduct.

“My union has since emphasized to me that I could have been disciplined for not bringing that information forward. With this in mind, I am alarmed the Canadian Media Guild has not supported me further.

“While I regret the way this situation has played out, I appreciate the support I have received from many colleagues throughout the day and look forward to moving past this unfortunate incident.”

So much, so fast, so good