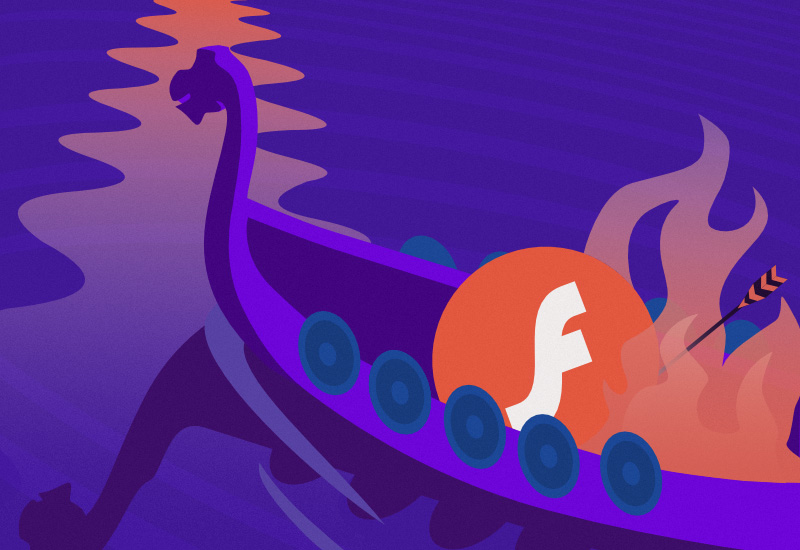 Between the years when the oceans drank New Orleans and the rise of the Y2K scare, there was an age when shining webpages lay spread across the internet like wizard gifs on an amateur GeoCities site — Miniclip, DeviantArt, SomethingAwful, Newgrounds, with its animated videos of fighting stick figures, Maddox that bordered on the verdant lands of Seanbaby, Homestar Runner, whose heroes wrote emails with boxing gloves on, and eBaum’s World, with its animated videos of fighting stick figures which were often stolen from Newgrounds. Such was the proud epoch of Web 1.0, held together with the guile and skill of the young master of the millennium’s new medium: Adobe Flash.

But the world has moved on from these ancient days, GeoCities have crumbled and the pillars that held up its citadels have, too. On Jan. 1, Flash Player, which had once tread the pixeled thrones of the fledgling internet under motion-tweened feet, was at last laid to rest. Adobe officially ended support of the software.

The demise of our hero was a long time coming. By 2020, Flash was a digital dinosaur, rife with security issues and outclassed by HTML 5 as a content presentation platform. The tech world had progressed and brought with it the era of Web 2.0, with its user-created microcontent, interactive pages and robust social media networks. Therein lies today’s tragedy: the end of Flash severed one of the few threads connecting us to our digital heritage and an internet experience that is alien to today’s.

To commemorate this shift in online culture, let’s remember the best parts of Flash content’s salad days and think about how we might preserve the ethos that helped create them.

First and foremost, Flash offered a way to realize a vision. The early internet was a place where anything goes, for better or worse. Flash aided and abetted this by circumventing the need for a budget or animation equipment, allowing anyone with access to the software to give form to their dreams and share them with the world. The form of these dreams often resembled a Mario sprite holding a gun, but some more vibrant arts from this period have stood the test of time. The works of Neil Cicierega and the Homestar Runner being notable standouts.

Neil Cicierega is a maestro of the internet age and one of the first people to make a career in the nebulously defined field of content creation. Mainly working in music, both under his name and the musical project Lemon Demon, and short videos, Cicierega has remained relevant for decades. Readers may recognize his work in Harry Potter Puppet Pals and the Ultimate Showdown of Ultimate Destiny. The latter represents the quintessential Cicierega. In it, Cicierega takes the dorky conversation staple of “who would win” in a fight between pop-culture characters and pushes it to an extreme, complete with charmingly amateur Flash-animated visualizations.

In contrast, Homestar Runner was a focused cartoon show with clean animation, slick writing and pro-quality production. The characters answered emails from fans on a dated Disk Operating System hardware, made low-quality buddy cop films or engaged in meaningless but hotly-contested athletic competitions. The creators, Matt and Mark Chapman, endearingly referred to as the Brothers Chaps by fans, have since gone on to work high profile gigs in broadcast animation, working on hits like Gravity Falls and Wander over Yonder. But, the level of professionalism and sense of fun still shines through their earliest work, even as it clocks in at two decades old.

This separation from business in the early days of Flash also contributed to the culture. Flash content was freely available and made for the love of it. The lack of clear avenues for monetization meant that hard work went unrewarded, but this also kept the communities and games themselves from suffering from the corporatization that now plagues modern platforms.

Flash animations were free from mid-roll ads for shaving products or calls to smash like and subscribe buttons. Flash games could be enjoyed without shelling out for microtransactions or downloading data-harvesting apps. Sound fascinating? Interested readers should delve into the library of Flash content hosted on Newgrounds.com, whose community has developed an open-source alternative to Flash player, preserving decades of games and animations for the post-Flash world.

The community aspect of Flash content also reflected its Web 1.0 sensibilities. In the modern social media bubble, users frequenting content aggregation platforms like Reddit and Instagram are presented with a stream of posts curated by algorithms and riddled with sponsored content. In the age of forums and mailing lists, users had more of a direct hand in curating their web experience, searching websites, crawling through webring and generally being active participants in the media shared, created and consumed.

Such investments into the online community were displayed in the degree of customization available in these times. Users cut their teeth on HTML and dazzled viewers of their Myspace or LiveJournal home pages with animated cursors and bit-crushed auto-playing MIDI files. I won’t go as far to say that this was a more ethical method of digital citizenship — construction of a digital bubble of self-reinforcing ideas, devoid of challenge or dissent was definitely possible — but at least it was more engaging and encouraged an interaction beyond repeating talking points and reposting Instagram-slick infographics.

Of course, this retrospective of the early internet doesn’t tell the full story. It glosses over email scams, power-tripping forum mods and the origins of various unsavoury digital communities that metastasized into the alt-right and anti-vaxxers. But, we can still pull a few positive lessons from our digital forebears

First, create and share your creations widely. The media of Web 1.0 still inspires creators to this day. Continue the cycle.

Next, be self-indulgent. Pursue things from a pure place of joy, and even if your creation doesn’t get widespread traction, you will at least have the honour of expressing a part of yourself.

Last, take an active approach to curate what you read and see. Branch out beyond the Instagram Explore page and challenge yourself, even in just reading or seeing new things. The ideas sparked by the change might surprise you.

As long as we remember these lessons, the spirit of Flash is with us, and if you look hard, you can find it living on. McMansion Hell, a site dedicated to methodical takedowns of shoddy, nouveau-riche architecture and Public Domain Review, an online journal showcasing the weird and wonderful media that has passed into public ownership, were both founded in the 2010s and beautifully show an outlet for creativity that reflects the best of the digital age. We would do well to follow and build upon their examples.

Networks without the ’net