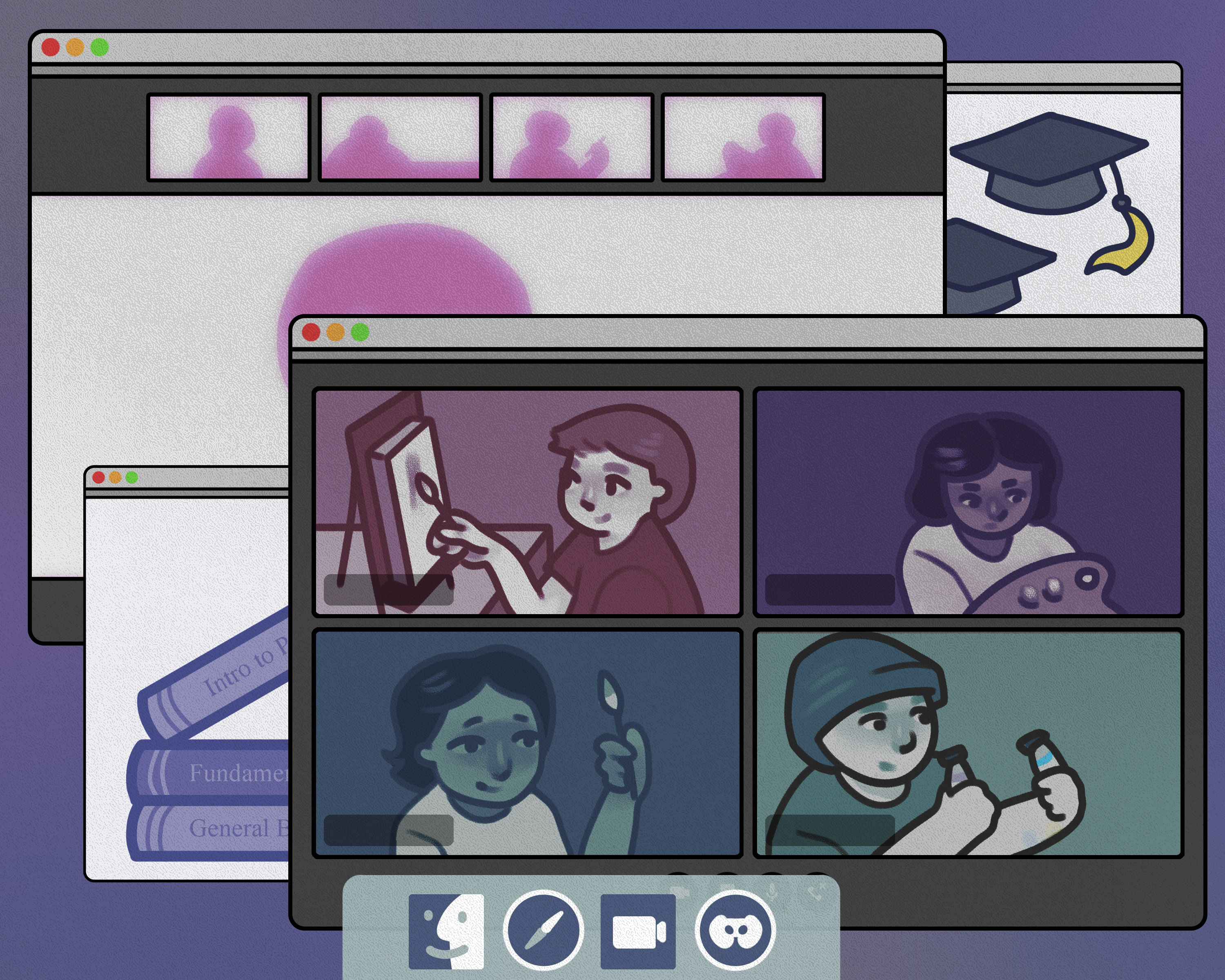 During a year of entirely remote learning, maintaining a sense of connection with the university community is much more complicated than usual. The University of Manitoba’s academic student groups have taken it upon themselves to keep students in touch with others in their faculty, but it definitely has not been easy.

For example, some executives had no idea what they were getting into when they were elected. Nick Noonan, the president of the Manitoba Law Students’ Association (MLSA), was elected just before the pandemic started wreaking havoc in Manitoba.

“It’s tradition for the previous president to pass on a handover package of notes, thoughts, challenges, goals and things on your radar as the next president,” he said.

“In mine, which I received in early March, I remember my predecessor noted, ‘And your challenges as a leader might even include this crazy COVID-19 thing if it persists.’ The craziest part to me, though, isn’t that she had the foresight to recognize that [COVID-19] might be a concern — it’s that I vividly remember reading that and scoffing, thinking that there was no way that [COVID-19] would be a concern through the summer, let alone into the school year.

“Oh, for the innocence of early March.”

Other groups finalized their executives over the summer or in the fall, with a better idea of the challenges they would face. Still, they all agreed not being able to see their classmates and professors in person puts a damper on the university experience.

President of the Biological Sciences Graduate Student Association (BSGSA) Tommy Pontbriand said the isolation is particularly difficult for graduate students because even virtual academic interaction is now almost entirely limited to their lab cohort, which makes it hard to feel like part of a larger department.

“You cannot just put […] 30 people on Zoom and hope that they’re going to connect as much as they would do in person,” he said.

“I think it’s just the interconnections between the different research groups that is just not as present, and it’s such a shame because it’s such a fun part.”

For the U of M Engineering Society (UMES), the biggest loss by far was their faculty-specific orientation, lovingly dubbed EngO. Every year, the committee begins planning in May, and senior stick Braden Ganetsky said the 15-hour event is the group’s second-biggest event for the entire year on the budget.

While there was an online EngO in September, the in-person event is such a strong bonding experience for engineering students that UMES decided it wasn’t enough.

“At this point, actually, we are planning on having a double EngO next year, because to us it is such an important event that we can’t let people miss that,” Ganetsky said.

“We are still going to remember to not just have that whole experience just put to the side. We want to make sure that all our frosh end up experiencing that at some point, even though they didn’t this year.”

Nevertheless, online interaction isn’t all bad. Whether on Slack, Discord or Facebook group chats, students are making the effort to stay in touch, and everything from themed movie nights to impromptu video game sessions goes a long way toward recapturing the feeling of community. Alanna Johnson and Katharine Kalinowski, co-presidents of the Graduate Association of Students of Psychology (GASP), said while planning events is more difficult during the pandemic, it is also more rewarding.

“I think in some ways there’s less competition for fun events that are happening right now,” Johnson said.

“Normally in a busy fall term, there would be tons of different things competing for our time, so in some ways just having less going on generally I think encourages people to come together.”

“I find that now I crave social interaction so much, so when these events are available — oh my goodness, I can interact with people!” Kalinowski agreed.

Some groups have held or are planning to hold Bob Ross-style art nights over Zoom as a relaxing, non-academic activity. In fact, GASP used part of their budget to purchase and deliver paint supplies for their participants.

“The turnout was better than most in-person events that we’ve had, and just to be able to sit down with a group of people just felt so comforting to me,” Kalinowski said.

“I’m like, ‘OK, these are people that I can socialize with that are here to support me.’ It was just a very inclusive experience.”

Two of the graduate student groups in particular have also focused on keeping students active. GASP is planning a virtual Zumba class in December and the MLSA is currently running a Robson Hall fitness challenge.

“It’s been a great way to help people stay active, build community and has even led to some friendly competition,” Noonan said.

“I’m presently beating acting dean David Asper, and while he is arguing that there should be some sort of a modifier for age, I’m not going to let him forget it.”

Meanwhile, the U of M Anthropology Student Association (UMASA) has taken advantage of the pandemic to make new connections outside the university. Communications director Bailey Palamar co-ordinated and presented a virtual tour of the St. Boniface Museum, which drew not only anthropology students, but also a smattering from other departments.

“The increased collaboration with other student groups has definitely been the greatest benefit by far,” he said.

“Working with the University of Manitoba’s history association has been great for trying to organize a collaborative trivia night, probably in January. Then we’ve also reached out a lot more to the University of Winnipeg’s anthropology association, which I don’t know if we would have done otherwise.”

The BSGSA is in a similar position of finding unexpected benefits in virtual events, with opportunities popping up that previously would have been impossible.

“We organize big guest lectures usually, and so having it online we have actually [much] less restrictions,” Pontbriand said.

“Usually what we would do [is] we would send out nominations for those guest lectures, but we were limited because we were taking the money from the student association to fly the speakers to come, and for them [to stay] in a hotel or something.

“So usually we’re keeping [to] people that were not too far, but now that it’s online on Zoom, the sky is the limit. We can decide to have any guest speaker if they’re up for it.”

Most importantly, however, knowing everyone else is in the same situation has made people more enthusiastic about interacting with people they may previously have taken for granted. Ganetsky is proud of the UMES Discord channel, where nervous freshmen and seasoned fifth-year students alike can hang out as friends, and Pontbriand enjoys the BSGSA’s weekly “Crackerjack” seminars in which students and faculty gather to listen to practice thesis presentations and other short talks.

“It’s a little bit of an equalizer,” Johnson explained.

“As students, we’re all going through something that we can each understand even though it looks a little bit differently for each person […] There’s a sense of camaraderie that wasn’t there before. Even some of the staff and faculty have reflected the same things — [we’re] seeing some of them come to the events because they really are craving that interaction with students.”

These students have put in a lot of hard work to help their peers feel like part of a community, and they aren’t done yet. Despite the challenges remote learning has thrown at them, all the groups expressed pride in their executives’ ability to adapt.

Noonan put it best: “As a great saying I once heard goes, ‘Thank you for flying the plane with me whilst building it together.’”

Music to her ears