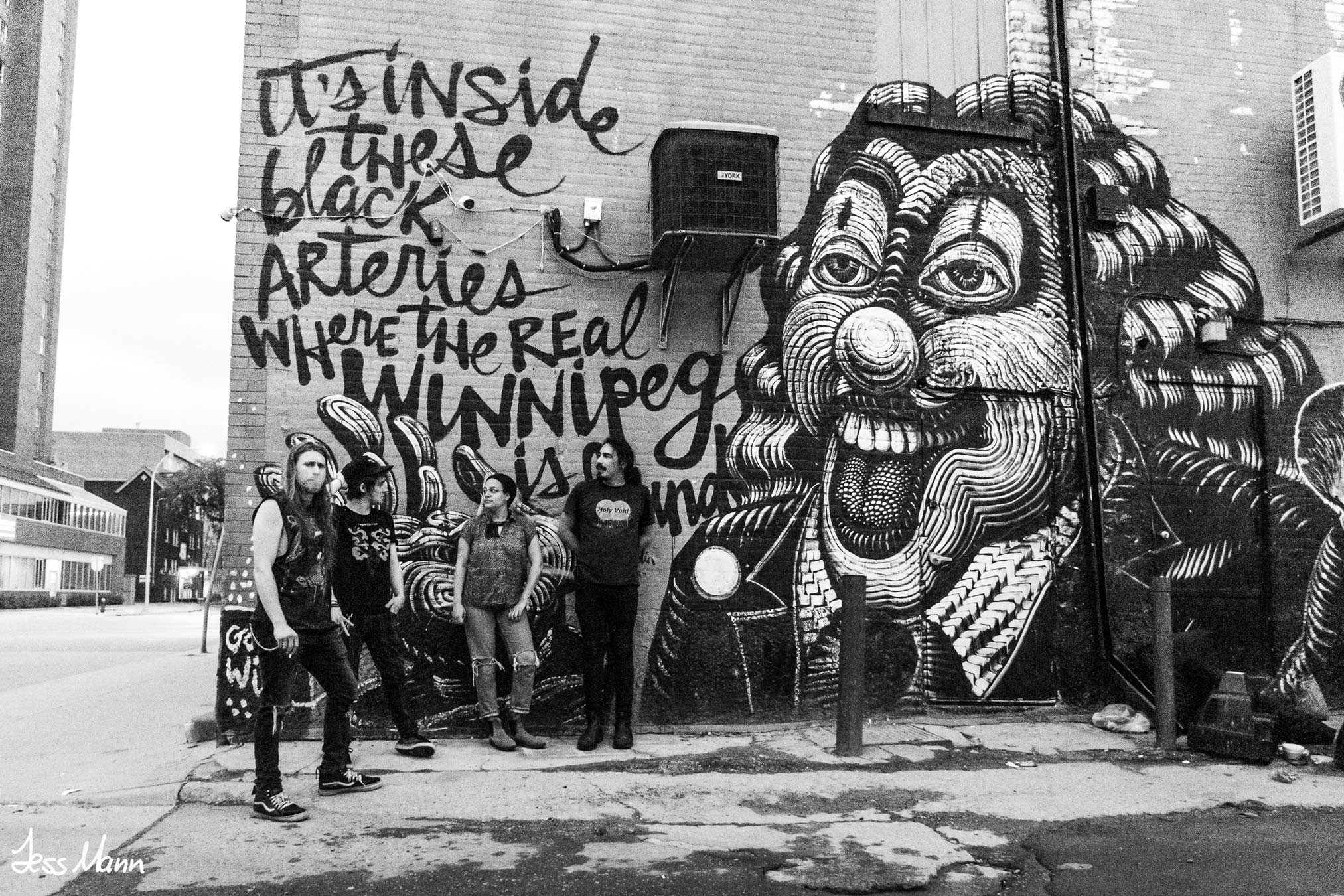 Nearly everyone, at some point, dreams of becoming a rock star. Or, perhaps not a rock star but a supermodel, an acclaimed actor or a comedian — plucked off the street or pulled onstage, a bit of cosmic serendipity suddenly shoving you into what you were always secretly meant to be.

Kayla Fernandes knows this origin story well — it was the first night of 2018’s Manitoba Metalfest and they were front row for the Cancer Bats at the Park Theatre when vocalist Liam Cormier’s hand reached out into the crowd.

“Liam pulled me up onstage to complete the lyrics to ‘Pneumonia Hawk,’” Fernandes said.

“I can’t even tell you what I was thinking in that moment […] I think it was the first time in a very long time that my mind went completely blank.”

It was only while working the Metalfest merch table the following day that something began to shift. People started approaching and suggesting Fernandes start their own band.

“So, I came home very, very stoned and very, very excited and I was ranting and raving to my boyfriend, who is now the guitarist in the band, telling him what had happened,” Fernandes said.

Soon enough, Fernandes received a message from Cancer Bats and Agapito drummer, Mike Peters, inviting the newly formed band — with Fernandes on vocals, Dylan Sellar on guitar, Seppel Saünlust on bass and Julien Riel on drums — to open for them.

The band name came a week before the performance.

“It was completely Dylan’s idea,” Fernandes said. “He was like, ‘Why not Vagina Witchcraft?’ And I was like, ‘That is so stupid, nobody will ever, ever, ever take us seriously. I’m in.’”

And so, Vagina Witchcraft came up from the basement. The band’s inaugural show went by in an anxious, edible-and-excitement induced blur — Fernandes said it felt like things had suddenly fallen into place.

“I’ve always wanted to do something with music, I just didn’t know that I had this inside of myself,” they said. An activist and poet, Fernandes is no stranger to unleashing their power and fury on a crowd — their speech at June’s Justice 4 Black Lives rally was both spoken word performance and call to action, a sort of harbinger for the throat-shredding exorcisms found on Vagina Witchcraft’s debut.

As a Black, queer, gender non-conforming metal fan, Fernandes said that, prior to Vagina Witchcraft, they’d always felt like an outsider in their own scene.

“I’ve had racist comments thrown at me and racist slurs thrown at me at shows when I was in my early twenties,” they said, “but I think that now, presently, everything has really changed regarding my own personal experience.”

The band’s ferocious self-titled debut — recorded live at the UMFM studio with engineer David Dobbs — is grounded by Fernandes’s poetry. It’s an excavation of what it means to be queer and Black in 2020, a manifesto for survival and another step toward changing the face of Winnipeg’s metal and punk scene.

And though Fernandes has plenty to be angry about, they describe their love for the scene as being about healing as much as it is rage.

“I will forever be a fan of doom and hardcore and punk because it helped shape the person that I am and it helped me get through so much in my life and I owe it everything.”

Cross over to the other side at planetarium album release