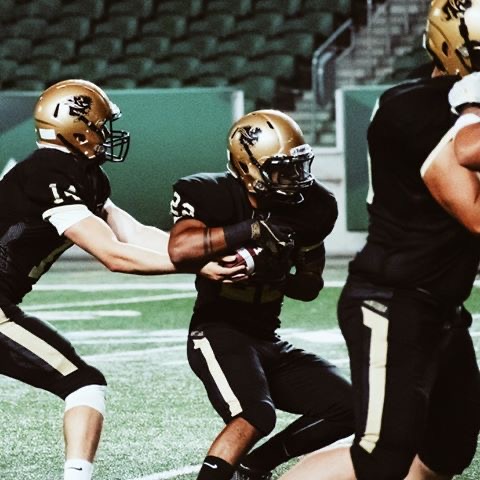 The COVID-19 global pandemic has disrupted the sports landscape across the world. Amateur and professional leagues have either cancelled or delayed seasons to a later date. This was done in university sports as U-Sports previously cancelled all of its fall and winter championships for this school year.

For many athletes, the cancellation meant that there would be no opportunity for competition and that this season would be dedicated to training in the gym. However, for one Bison athlete, this was not exactly the case.

Breydon Stubbs, a member of the Bisons football team, has the unique opportunity to play another sport outside of university at a competitive level.

The second-year running back for the herd is also a second-year defenceman for the St. Vital Victorias of the Manitoba Major Junior Hockey League (MMJHL).

Unlike football, the hockey season is still going on in Manitoba. The MMJHL has already begun its season and is hoping to get through the year.

“This hockey season hasn’t really changed from the past year,” Stubbs said.

“We’ve been having practices as well as games since the season started. We were lucky enough to be able to have some competition this year, especially myself since there was no football season.”

Although Stubbs has played hockey for a long time and has found success on the ice, football is the sport he prefers.

Stubbs played football in high school for the Vincent Massey Trojans when the team met the St. Paul’s Crusaders in the high school final in 2018. He had a touchdown in the Trojans’ come-from-behind win over the Crusaders.

After securing the ANAVETS Bowl with the Trojans, Stubbs was named to one of the rosters for the Senior Bowl, an all-star game comprised of the best seniors in the Winnipeg high school football league.

With his short yet extremely successful high school season behind him, Stubbs set his sights on the University of Manitoba. With his freshman season ahead of him, Stubbs’s focus was set on football and school.

As a first-year student, Stubbs worked on establishing himself on the team and earning himself a future spot. But then hockey came calling back after the football season ended. Stubbs received a call from the St. Vital Victorias’ head coach, Jeff Mitchell.

“By the end of the football season last year, a coach from the MMJHL reached out to me and asked if I still wanted to play hockey, so I’m very happy things worked out,” Stubbs said.

Hockey has become a great competitive outlet for Stubbs while he remains focused on training for football. Thanks to the Bisons’ football coaches, a safe environment was created for players to train as a team for a prospective season next year.

“This football season, our coaches decided to have scheduled practices like we were to play every week,” Stubbs said. “It was good for the vets to get the reps in as well as the new guys to show them how things work every week. We’ve been doing this for a good four months now following COVID -19 protocols and it [has] worked out pretty good.”

As Stubbs holds down the blue line for the Victorias, he remains committed to his continued development and future success on the field for the herd.

The second-year Bison knows that if he wants to achieve his goals for next year, he will have to make the most out of the 2020-21 season.

“The goal for next football season is to [start],” Stubbs said. “I think I have the opportunity to be the number one guy […] and that’s all I’m thinking about during practices this year.

“I know it will affect me positively being able to practice this year,” he said. “So, that’s all I plan to do is grind this year of practice out and hopefully the results will show next year.”

Make sure you look out for Breydon Stubbs on the ice for the St. Vital Victorias this winter and on the field for the Bisons next fall.