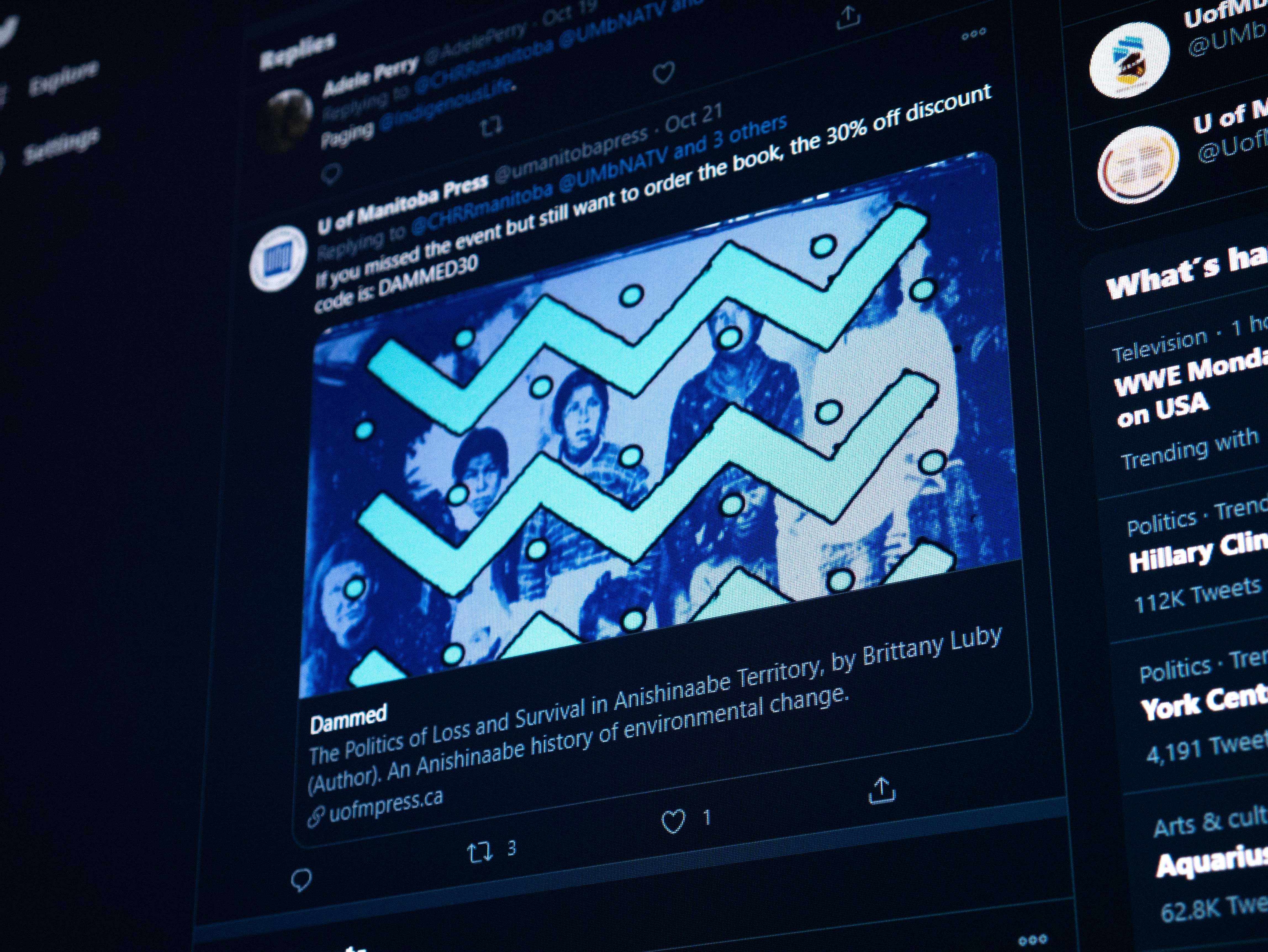 On Oct. 21, people from all over Canada tuned in to attend a free Zoom seminar as part of the U of M’s Native Studies Colloquium series titled “The Politics of Loss and Survival in Anishinaabe Territory.”

The seminar featured speakers Brittany Luby, assistant history professor at the University of Guelph, and Chief Lorraine Cobiness, board president and chief of Niisaachewan Anishinaabe Nation.

The two, in conversation with Niigaan Sinclair, an associate professor at the U of M, discussed Canada’s history with the hydroelectric boom as well as current activism as examined in Luby’s recent book published by the University of Manitoba Press,  titled Damned: The Politics of Loss and Survival in Anishinaabe Territory.

The book, through oral history along with archives and environmental observation, aims to explore how Canada’s hydroelectric boom in Kenora, Ont. and the Lake of the Woods area and hydroelectricity, “designed to serve settler populations,” resulted in the undermining of a treaty with Luby’s ancestors.

She shared how Anishinaabe families were able to resist and to respond to the economic loss.

Luby said that education can “help us understand that resistance is still happening today.”

“It’s not only the historical activities that I talk about in the text, but also […] the education that we’re seeking today for our young people and also even this space,” she said.

Luby said the seminar “is a space of resistance and putting these stories out into the world.”

“I think that learning is also an unlearning, which is part of that resistance movement,” she said.

Luby said the seminar had a diversity of listeners, including individuals from the International Joint Commission (IJC), an organization that is “guided by the Boundary Waters Treaty,” signed in 1909 by Canada and the U.S.

The IJC takes approves projects that affects water across the U.S./Canada boundary, along with investigating issues and recommending solutions to those issues.

The IJC’s recommendations and decisions work with a wide range of water uses, including hydroelectric power generation, along with drinking water, fishing, agriculture and ecosystem health.

“Every time I turn on a light in Kenora, I place a demand on an electrical grid that causes the periodic flooding of my ancestral home, so it is my hope that the stories contained in this book […] will cause you to ask, ‘Where is electricity being generated?’ It’s my hope that you will ask, ‘Whose lands are being inundated for my convenience?’” Luby said.

Sinclair brought to light the stance that many people have taken “to say, enough is enough already.”

“Enough is enough with the constant taking of our lands and our territories,” he said.

According to Sinclair, right now, Indigenous people in Canada have only two per cent of their lands.

He asked, “Why is it that pipelines always are built on our territories?”

“Why is it that the dams are always built on our territories?

“Why is it that, constantly, our treaty rights are the ones we always have to give up so that Canada can have this economy?”

Sinclair, while mentioning how “so many brilliant and incredible women in Treaty 3 have been fighting so long for water,” expressed how, at times, he felt it’s a “frustrating challenge, because what we’re doing is we’re constantly seeking peaceful means to what are violent impositions on our territory.”

He asked Cobiness how she kept positive in all of this when “we continue to see resource extraction projects […] stepping up during the pandemic.”

“I think as a woman, as Anishinaabekwe, we are generally caretakers of a lot of things,” Cobiness said.

“We are the backbones of our communities […] We’re strong, we know, and it takes a lot to be always continuously […] hopeful, right?