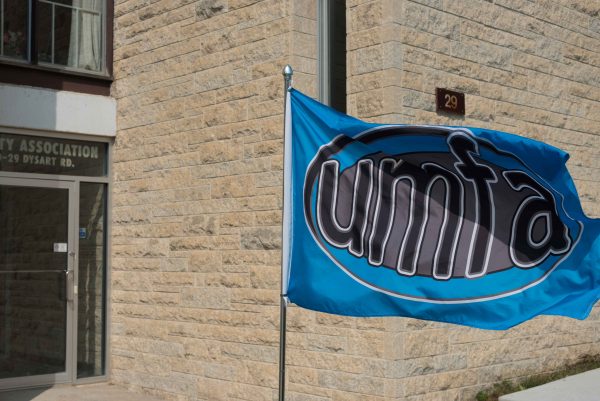 The University of Manitoba Faculty Association (UMFA) is expressing discontent with the conditions of working remotely from home.

The group has taken to posting photos of instructors’ at-home workstations on Twitter in a bid to draw attention to what they say is a lack of supports.

Biological sciences faculty member and UMFA president Michael Shaw said that while they recognize the ongoing pandemic is a factor, faculty are not getting enough support from administration for working from home.

“We recognize that there’s a pandemic and we do have that [working from home] ability more than many other workers in the economy,” Shaw said.

“In a time of […] rising tuition fees and rising enrolment in undergraduate credit hours, the university faculty members are working more than ever with very little support from the university,” he said.

“In terms of things like proper chairs, computer resources, internet resources — I’ve had to upgrade my [internet] account so that I can stream to 150 students at a time, and the university has been very unwilling to assist with those sorts of things.”

“Precarious employment is a huge issue for universities across Canada, really around the world,” Shaw said.

“And there are some places that people have job security so that they have full and fair academic freedom to state controversial opinions and to really expand on learning for the students.

“And when you take away that academic freedom, when people are moved into a precarious position, it really significantly impacts the quality of the teaching that can occur.”

The faculty associations of the Universities of Alberta, Saskatchewan, Western Ontario and Lethbridge have all issued similar letters condemning the policy and advising AU that members will no longer be recommending Athabasca to students to complete credits if any AUFA members are de-designated.

“We are encouraging our members not to do that, not to use University of Athabasca resources if they continue down this track,” Shaw said.

UMFA itself is currently talking salary with the U of M.

“We’re in the salary reopener period of our collective agreement,” said Shaw.

“[We’re in] the fourth year of a four-year deal where there is in fact no salary, because of the PSSA [public services sustainability act] and that illegal interference in free and fair collective bargaining by the provincial government.”

The PSSA — provincial legislation passed in 2017 — enacted a two-year freeze on wages for public service employees following the expiration of their existing collective agreements. It was declared unconstitutional in June of this year.

“That’s what we’re negotiating with the university right now — how to deal with the fact that we were in fact withheld money, [the act of which is] now deemed by the courts to have been unconstitutional.”