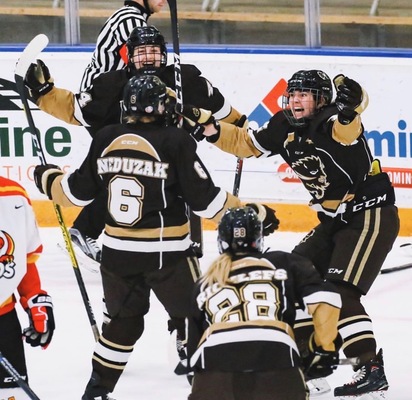 Even with no official announcement yet on the 2020-21 U Sports hockey season, the Bisons hockey teams remain hopeful for the future.

Due to COVID-19, it was previously announced that ice hockey will not be able to commence until January 2021.

An update on the situation from U Sports is set to happen no later than Oct. 8, 2020.

The women’s Bisons team and second-year player Molly Kunnas are preparing for a shorter season.

“We’re all trying to stay optimistic and hope for the best,” Kunnas said.

“Everyone is working hard on and off the ice in hopes that we will have a season this year.”

Kunnas was a rookie last year for the struggling Bisons team.

The Thunder Bay, Ont. native only put up two points in her rookie year, but saw it as a year of growing.

“I really enjoyed my first year as a Bison,” she said.

“I grew a lot as a player and learned so much from my teammates and coaches.”

A rookie year is often tough, but a second year after a long time spent quarantining could be much more difficult.

With ice rinks and less spaces available in gyms, it can be a challenge to stay in game-ready shape.

“Training has been a bit different during quarantine because there are a lot of rules we need to follow to keep a safe social distance,” Kunnas said.

“It feels good to be back in the gym and [back] on the ice with the team, though.”

Since school has started back up, the team has been safely practicing and working out in hopes of performing better than last season.

“A typical day for the team training-wise will either consist of a workout or a practice on [the] ice,” she said. “We have been practicing on-ice twice a week at a rink off campus and off-ice three days a week.”

Hopefully, this training and consistency is just what the team needs to outperform the 2019-20 Bisons team.

Kunnas has a total of four years left to play for the Bisons, but after that she hopes to continue with her schooling.

“After I finish my undergraduate degree, I would like to pursue a master’s degree in speech-language pathology,” she said.

Kunnas and the Bisons are uncertain about their season but should get a decision from U Sports sometime in the next two weeks.

Depending on where U Sports comes down, we’re in for either an exciting or disappointing time for the Bisons and all of their fans.

Vaccaro excited about future with the Bisons