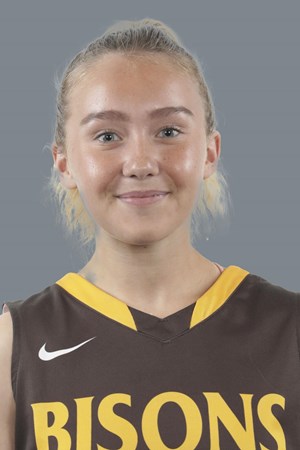 The women’s Bisons basketball team finished last year with a 9-11 record, placing the team 10th in the Canada West standings, and a chance to improve its standing this year won’t be available with the season’s cancellation due to the COVID-19 pandemic.

It’s an unfortunate situation for every university sports team, including the Bisons.

Last year’s basketball team had a number of bright sports, but one that stood out in particular was rookie guard Lauren Bartlett.

After an impressive season, Bartlett was named to the all-rookie team, a huge accomplishment for the beginning of her university basketball career and something that left her feeling proud.

“There were a lot of skilled rookie players in the Western Canada region and I was grateful to be a part of that group.”

Bartlett put up a season-high 20 points for the Bisons in a game against the Mount Royal University Cougars in early January, and her sister, Deidre Bartlett, is also on the Bisons roster.

“I thought my rookie season was a lot of fun,” said Bartlett.

“I also appreciated the support I received from the coaching staff throughout the year. My team improved a lot throughout the season, so being able to see that progress was very rewarding,” she said.

U-Sports announced Oct. 15 that its 2021 winter national championships would indeed be cancelled, confirming the fears of both athletes and fans.

Despite the season being cancelled, Bartlett and the Bisons have been practicing to improve their team for the next school year and to ensure they don’t lose their step for when the season does begin.

“Since the beginning of September, we have had shorter practices with smaller groups five days a week,” said Bartlett.

“We are not allowed to play with any contact, so we have mostly been doing shooting and dribbling drills. We also have precautions in play to keep our team and others safe.”

After a successful rookie campaign, Bartlett is looking to continue to improve. Whether it be in the gym or on the court, she is very determined.

“I think that this year is the perfect opportunity to improve,” said Bartlett.

“Without having games every weekend, we can focus on [our] training and development.”

“I would really like to work on speeding up my shot and also improving my overall fitness.”

Basketball, in most cases, does not last forever for an athlete, and Bartlett said she is not expecting to play basketball beyond the university level.

“I am really excited for my years to come as a Bison,” she said.

“My goal is to have a successful university basketball career.”

“Currently, I am not planning on playing basketball beyond university. Although, I am not opposed to any opportunities that may arise in the future,” she said.

Bartlett and the Bisons could come back even more robust with the right attitude and the proper training and become a force to play against when playing does resume.