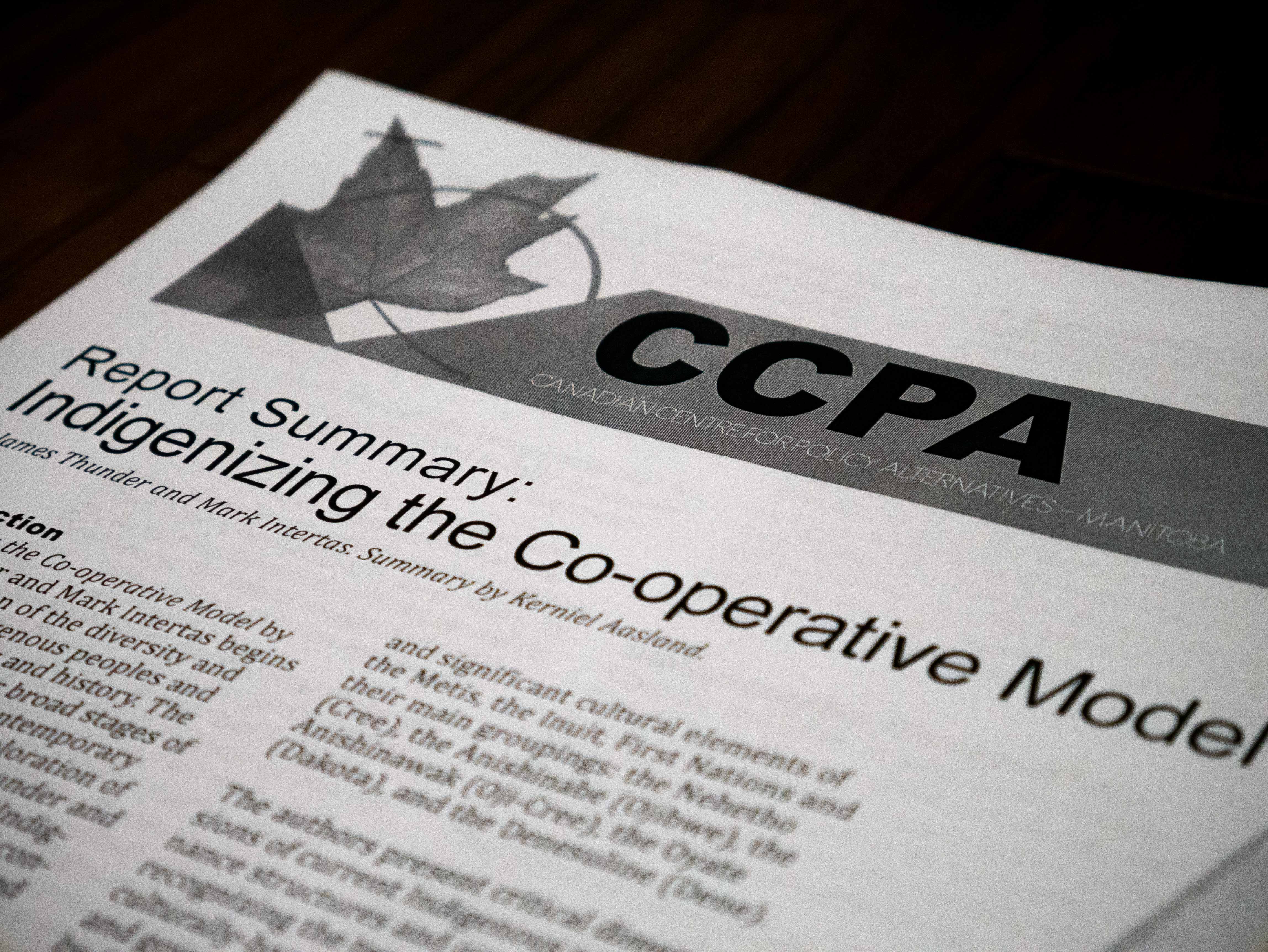 On Oct. 15, the Canadian Centre for Policy Alternatives (CCPA) held a webinar and launched a report entitled Indigenizing the Co-operative Model, authored by Jimmy Thunder and Mark Intertas, two University of Manitoba alumni.

Thunder is an Asper school of business graduate and a co-founder of Reconciliation Thunder, a non-profit that uses social media to educate on reconciliation, treaties and the history of Indigenous-settler relationships in Canada. Intertas received his master’s degree in city planning in 2017 and completed a law degree this year.

The report includes a literature review featuring an overview of the history of Indigenous peoples in modern-day Canada, interviews with key people including Elders and activists and an Indigenous design workshop.

The co-operative model is a way of governing businesses which are owned by members — either consumers or the workers employed by the business — collectively making decisions through the principle of “one person, one vote” as opposed to shareholders, whose say in decisions is weighted by how many shares in the company they own.

Generally, co-operatives are viewed by proponents as enhancing democracy in economic matters and a way of generally increasing the well-being of communities. Profits are distributed to members and tend to stay in the respective communities, rather than getting pocketed by shareholders and invested elsewhere, saved or used to finance luxury consumption.

The authors acknowledge that reality is more complicated in theory, however.

“We talk about how the co-operative model is a magic bullet solution […] but in this case I can’t really see how it would solve some of these very specific types of problems with specific solutions,” Thunder said.

The report also highlighted the similarities between the Neechi principles of community economic development, used by the Neechi Foods Co-Op and the government of Manitoba, and the Rochdale principles of co-operation, the set of principles originally adopted by the International Co-operative Alliance in 1937 and which today guide the decision making of 315 co-operatives in 111 countries.

The overlap in these principles — such as local decision-making, concern for community, co-operation with other co-operatives and local reinvestment of profits, among others — convinced the authors the co-operative model in practice can enhance Indigenous economic self-determination.

The report further suggested that the co-operative model would enable communities to more conscientiously decide how their cultures develop alongside economic development, as opposed to the corporate model of firms, pointing to the constant tension between economic and cultural development and cultural preservation.

In a discussion with the Manitoban, Intertas clarified that cultural change is an inevitable result of economic development, but with the co-operative model as opposed to the corporate model, the people of the communities impacted have more control over said impacts.

However, as the authors themselves noted, their findings are not without controversy among Indigenous people, especially around the concept of “red capitalism” which suggests Indigenous people can “Indigenize” capitalist structures and make use of them for their own purposes.

“There’s no pan-Indigenous opinion out there.”

Intertas and Thunder agreed that even though many debates about best economic practice for Indigenous groups still remain, the most important aspect is choice.

“If Indigenous people take it and bring it into their culture, and they redefine it, and that becomes their new culture, it’s still their culture,” Thunder said.

“As long as they are the ones deciding what is Indigenous, they determine that for themselves, then their self-determination is still strong.”

Local bands and ex-pat cyclist team up to help

A lack of focus