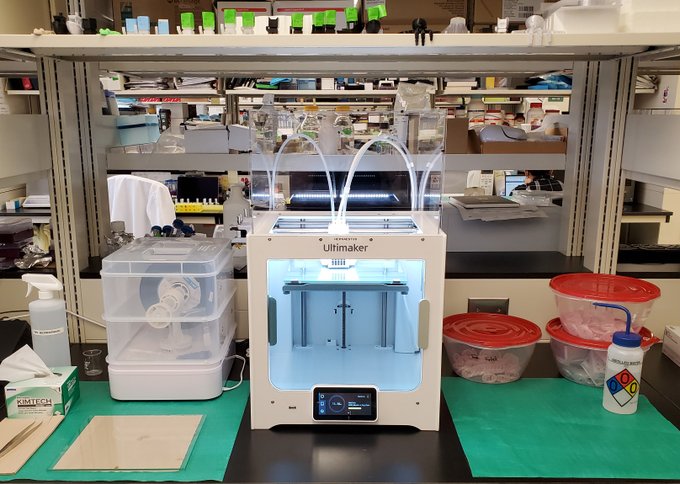 Bioengineering as we know it today has been around for less than a hundred years, but exponential advances in technology have placed the field on the cutting edge of science.

At the U of M, Adrian West, an assistant professor of physiology and pathophysiology in the Max Rady college of medicine, is using 3D printing technology in his lab to study the mechanical aspects of disease.

“The whole lung gets much stiffer and, at the organ level, this obviously makes it more difficult to breathe. But even at the microscopic scale of individual cells, the stiffer environment changes the way the cells function.”

But studying cell mechanics in a lab setting means dealing with fundamental problems in execution other biomedical researchers do not have.

“None of the usual strategies are particularly good when you consider diseases with a mechanical component,” West said.

Growing cells under controlled conditions often means a plastic environment, which is very different than conditions in the human body, and human tissue samples are rare and difficult to work with. The sheer size gap between human and animal organ systems also disqualifies animal testing.

However, using a form of 3D printing that works with “bio-ink” that connects existing cells in a structure made of natural and synthetic substances, it’s possible to create layers of material that eventually become large pieces of functional tissue. Changing the bio-ink’s formula and the design being printed allows West to create the kind of mechanical structures created by disease.

West began working with 3D bioprinting in early 2018 after receiving a Canada Foundation for Innovation grant.

During the process of working with the equipment, he realized he needed more specific equipment to manipulate the tissue being printed, which led to the addition of the regular kind of 3D plastic printer. While not unique — the faculty of architecture has its own 3D printing facility with the same technology — the plastic printer means West can create useful items like test tube setups or organ baths personally customized for his research.

“Bioprinting really represents the next step, both in terms of exciting new technology [and] also in terms of actually building and creating more interesting things,” he said.

“The new supporting technology of 3D plastic printing just amps it up to the next level, making it all easier to implement.”

West has used social media to offer his lab’s custom plastic 3D printing services to other biomedical researchers at the U of M as a way to introduce the technology’s potential in their field.

“The core problem is that there is a real disconnect between the knowledge in different academic communities,” West said.

“The real challenge, then, is all about marketing realistic capabilities and expectations, to the right people, using a language they understand. My hope is that, as someone with training in both biomedical research and biomedical engineering, I can help bridge the gap between the communities and try and make things easier for researchers at U of M.”

West’s lab is currently working on projects with airway, cardiac and skeletal muscle, as well as developing airway epithelial cells, which form a lining from the nose and through the lungs.

He also discussed the advantages of bioprinting in other areas, such as neuroscience, to emphasize the versatility of the technology.

“I am sure there are hundreds of possibilities I have not even considered, but just having that conversation with a researcher, in their language, can really highlight those possibilities,” West said.

“These sorts of interdisciplinary collaborations really do remove barriers to research, and [it’s] something I am really looking forward to in the future.”