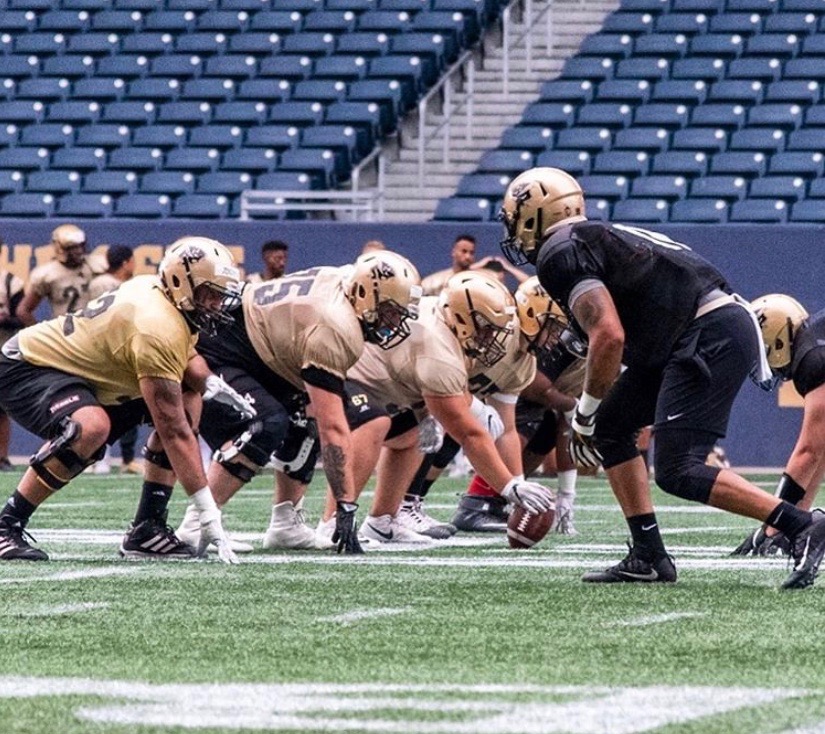 Though the U of M Bisons football team has been able to practice, the cancellation of the season due to the COVID-19 pandemic has left many first-year players ready to make their rookie season debuts waiting for another year to get their shot.

One of those players is first-year offensive lineman Matteo Vaccaro.

Vaccaro has played football for many years, previously at St. Paul’s High School and with Team Manitoba before suiting up for the Bisons. Vaccaro credits great coaching with the improvements his football skills have seen over his career thus far.

“The coaching staff that I was around for my high school football career played a huge part as to how I was able to bring my game to the next level,” Vaccaro said.

“Furthermore, being able to play on both the [under 16] and [under 18] provincial teams, I was exposed to the best coaching in the province which helped elevate my game to get to the next level.”

Quarantine can be tough on many athletes due to the struggle to remain on an elite level of athleticism.

Vaccaro has remained in-shape with a mix of at-home workouts and team practices that have followed safety precautions, and he is determined to be ready for the next season.

“During quarantine, I have been able to do some weight training at my house,” he said.

“Also, the team has been able to practice every Tuesday, Thursday and Sunday at the east turf near the soccer complex while following the university’s COVID-19 protocol for safe training.”

Going to a new team can be a hard process, but Vaccaro has had an easier time adjusting, which he attributes to the team itself.

“Being a part of the Bisons football team has been a great experience for me,” he said.

“The team is very welcoming and the group of guys that I am around every day brings a lot of energy to my day.

“The coaching staff is amazing and are driven to help shape who we are as a team,” he added.

“The team has really prided themselves on creating a brotherhood amongst every member of the team where no one is left out, which is amazing.”

Vaccaro described a close team when speaking about the Bisons, a trait that is necessary to the sport because of how important teamwork is on the field.

“I enjoy being a part of a team environment where every member has to work together, allowing the team to succeed.

“I enjoy the bonds that are created on the team that carry out further than football.

“Furthermore, football provides me the opportunity during the day where I can drop any thoughts during the day, good or bad, and work on my craft alongside my teammates and coaches,” Vaccaro added.

A unique challenge facing student athletes is the necessity to balance school with sport, something Vaccaro is aware of.

“My intentions for school are to pursue law,” he said.

“My future goals for football would be able to play out all of my eligibility with the Bisons and to secure a starting position with the team.”