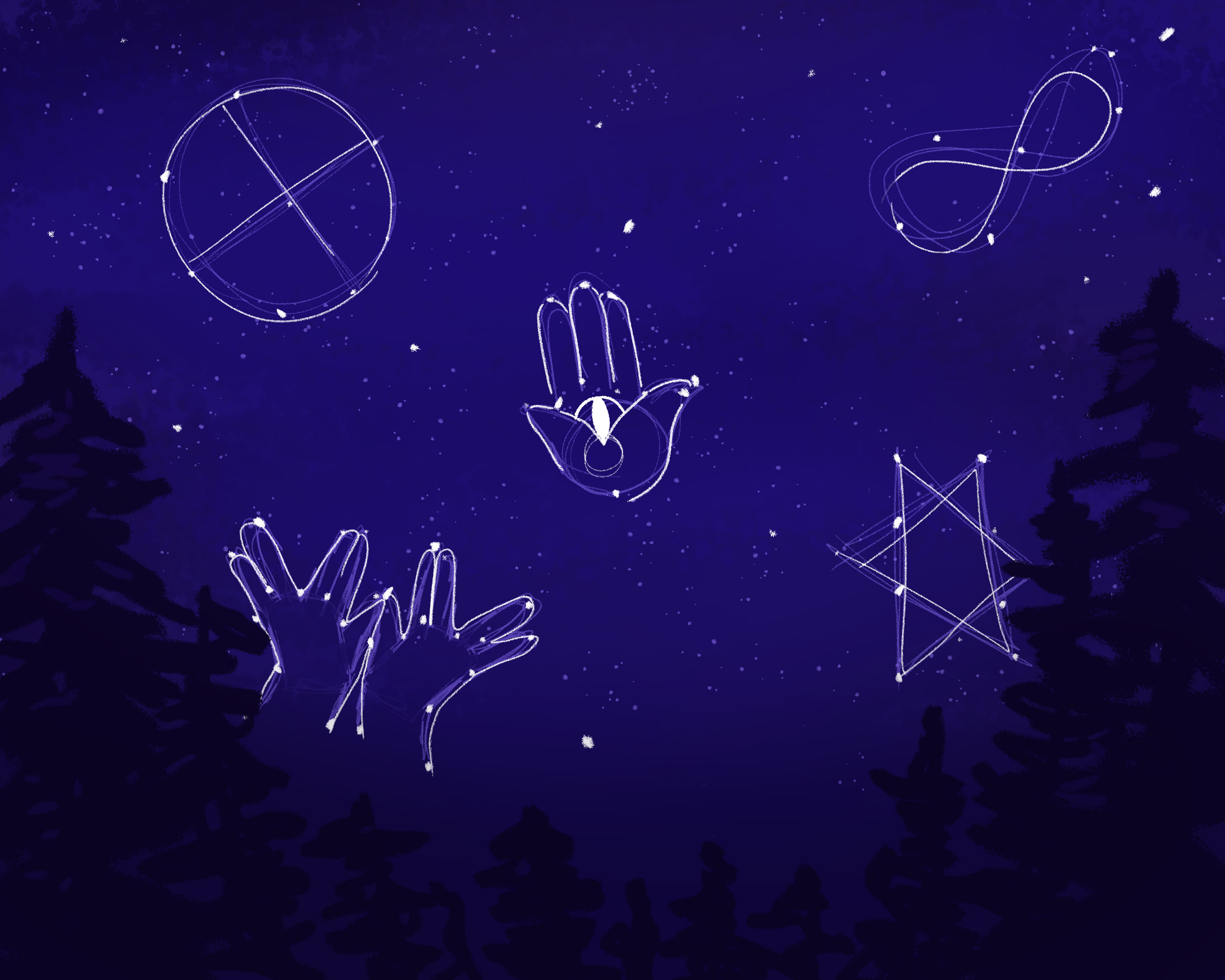 The first, funded by an internal U of M grant, focuses on whether cultural narratives exist around the world that explain how to predict the appearance of aurora borealis, or the northern lights, as a possible complement to scientific data.

While he was unable to find any published examples, Hechter suspects the kind of stories he’s looking for exist in oral traditions rather than in print, and knows he may never hear them.

“The Indigenous stories that are told to me are shared with me with trust and with permission for me to tell again, acknowledging that I am not Indigenous, and I don’t claim to be Indigenous,” he said.

The wealth of knowledge Hechter encountered while researching narratives of the northern lights inspired him to broaden the scope of his work. With two other grants, he is currently working with Arab and Israeli colleagues in Israel, as well as continuing his research with Canadian Indigenous populations, to help develop more diverse forms of science education.

“We need to be teaching science through multiple worldviews, not simply the male-dominated, Caucasian, European version of science,” Hechter said.

“It’s just too simplistic and not enough, and it doesn’t reflect, really, the world.

“It reflects one version.”

A Social Sciences and Humanities Research Council (SSHRC) grant focuses on creating a framework for secondary science teachers to present ideas from different perspectives to their students.

The combination of Indigenous and non-Indigenous educators from Manitoba with Arab and Israeli educators from Israel allows for multi-continental perspectives at the base level of education.

“What we are doing is generating curriculum in a professional development setting that is of many worldviews and multicultural and is inclusive,” Hechter said.

“My contention in all of this is that if we can teach science this way, we can help mitigate the hate and the othering and the xenophobia that we are experiencing in real life every day.”

A calendar, for example, can be solar, lunar or lunisolar depending on one’s culture even though all three are based on observing the sky. Hechter argued that explaining how different calendars work from a scientific point of view is not a major change but would allow for a much more multicultural discussion.

As a cross-appointed professor in the U of M’s department of physics and astronomy, Hechter is particularly passionate about those topics. The third grant he is currently working on is a collaboration with the Hebrew University of Jerusalem, studying professional development in physics curriculums.

“Let’s work together to develop this curriculum and this professional development in astronomy, because the night sky belongs to everybody,” he said.

“There are no borders in the sky, and the borders that we have on the land are societally placed and they’re artificial.”

Despite the availability of research funding, the path toward inclusive education is not easy.

“The volume of pushback that I get is ridiculous,” Hechter said.

Some believe that trying to promote non-objective data goes against the principles of science. Others, particularly scientists, claim that cultural narratives are too simplistic to fit alongside discussions of physics. Still, others are skeptical whether a white Canadian man educated in western science knows how to approach the project.

“People think that I’m trying to replace the science content with cultural narratives and stories, and in fact that couldn’t be further from the truth,” he said.

“We’ll still teach the science concepts and phenomena, but punctuate them, highlight them, illuminate them, contextualize them with these cultural narratives, these other worldviews that only enrich the content. I’m not asking people not to teach moon phases and solar phases and seasons, I’m absolutely not.

“I’m simply saying let’s teach them in a way that is inclusive and a little more holistic to the diversity that we have, because we are a multicultural population — why are we only teaching one version of one idea?”

The most personal form of opposition for Hechter, however, is anti-Semitism. He spoke about an incident last year where a man had to be removed by security after making anti-Semitic comments during a lecture Hechter was giving. He also faces considerable suspicion both at home and abroad simply for being a Jewish-Canadian man with close Arab friends.

All the resistance has only made Hechter more determined to continue his work.

“Science is not typically the place that people look for ideas of equity or diversity or social justice, because that’s not the place,” he said.

“Those places are usually social studies or English or literature. But why not science? We have the opportunity in science — we just typically don’t go there, and I’m saying let’s go there.”

After all, there are beautiful moments among the struggle. One of Hechter’s favourite anecdotes from his research is from Churchill, Man. where he often works with the Indigenous community. Around 1 a.m. while taking photos of the sky, an Elder approached Hechter and asked why he was so interested in the northern lights.

“I gave the worst answer in history,” Hechter said, laughing.

“As I’m talking, I’m hearing my answer in my head and I’m [thinking] this is the worst answer ever, I’m smarter than this, why am I doing this?

“He puts his hand on my shoulder and says, kind of interrupts me, ‘Son, those are my ancestors. They’re guiding the way for when it’s time for me to go west.’”

When Hechter looked up after fumbling with his camera for a few seconds, the man had disappeared.

“It changed the way I see this. I feel like I have a place and a purpose with this work that I’m doing,” Hechter said.