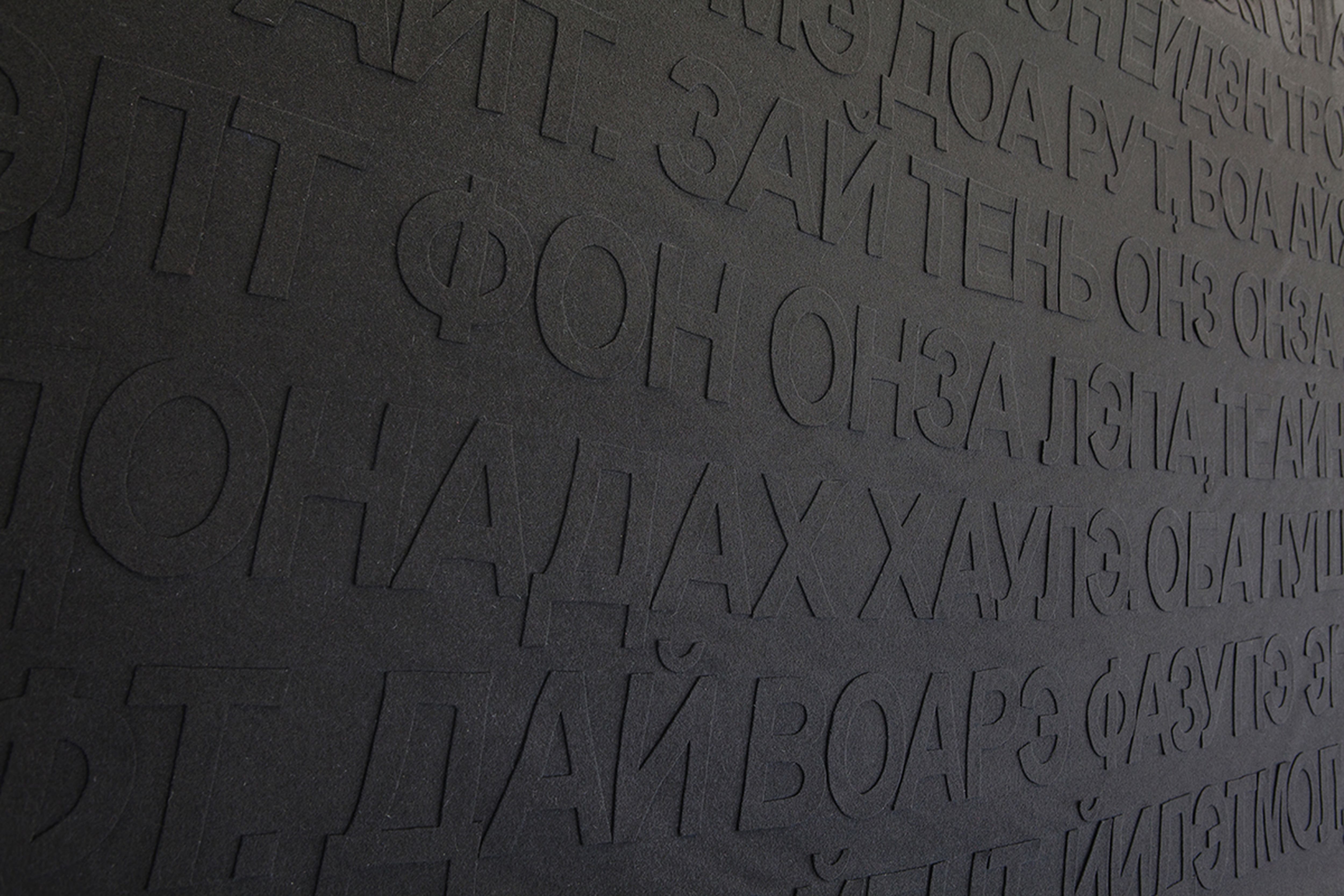 Image provided by the Plug In Institute of Contemporary Art

Friesen currently has an exhibition up at the Plug In Institute of Contemporary Art called The Cedar, The Birch, Our Hands At Full-Mast, Behind The After, which reflects on these topics, but particularly on the exile of Russian Mennonites within the diasporic culture.

The exhibition itself is minimal, with no plaques on the walls detailing titles or explanations of the work.

However, for viewers without prior knowledge of Friesen’s work, the pure emotion conveyed throughout the exhibition is more than able to make up for the narrative details and impresses upon the viewer the sense of a home lost and a struggle to maintain identity in relation to culture.

The first thing encountered upon entering the gallery space is the large black banner set up in its centre, facing away from the entrance and dominating the field of view. In a way, this builds anticipation as you set foot into the gallery, as the side with visual information is obscured from view and must be discovered.

In addition to this, having the banner divide the space this way and drawing viewers’ attention to it helps create a flow of movement in the space and sets us up for a narrative journey throughout the exhibition and engages the viewer in the space.

The banner itself is cryptic to those who are not clued into the specifics of Friesen’s work — the wall of windows facing the banner illuminates it just enough to catch a glimpse of the raised writing that covers it, which is written in Russian, speaking directly to a small population of Russian Mennonites from the Soviet Union.

An English translation of what is written on this banner can be found on the windows facing out to the street. The translation reveals it to be a protest banner, with the writings a call to arms drawn from many sources including Ukrainian anarchists, Soviet conceptualists, Friesen’s own writing and more. Behind this banner, there is a shift to Friesen’s wall-based works, which are pieces from an ongoing series, Our hands meet the sun at the edge of things. The focus of this section are four objects — a postcard, a painting, a stone and a blanket — which give the sense of a specific geographical location.

Additionally, the lengths of the wooden shelves and expanses of glass that frame these objects amplify feelings of depth and convey a palpable distance of both time and space that separates the exhibit from the items’ origins.

Despite the solemnity of Friesen’s exhibition, and even a sense of aggression with its protest banner, this set of work still leaves the viewer with a feeling of hope and conveys the connection Friesen feels to the land and culture that her family was exiled from, bridged by the language and stories they brought with them as they fled Russia.

The Cedar, The Birch, Our Hands At Full-Mast, Behind The After runs until Aug. 22.

Musical mashup of old and new