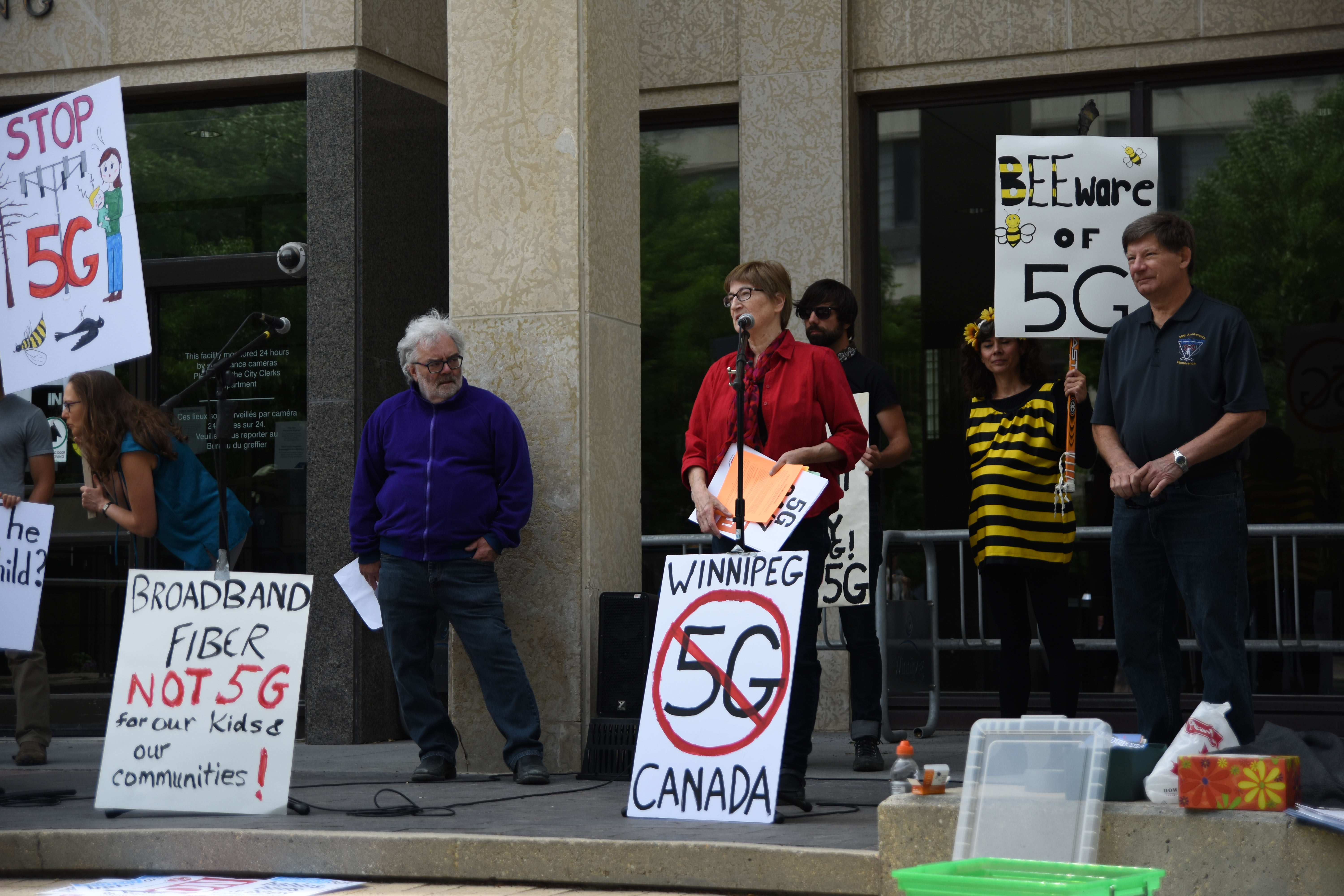 “Stop 5G,” read the sign of a concerned citizen.

On June 6, members of the 5G Winnipeg Awareness group gathered at city hall to hold a rally on the 3rd Global 5G Protest Day. During this event, Margaret Friesen — a former research biologist with the Government of Canada — took the stage along with a retired telecommunications engineer, a businessman and a child representative to share why they think the fifth generation mobile network (5G) is a serious threat to the health of Winnipeg residents.

The group is asking the City of Winnipeg to halt the installation of 5G antennas in residential neighbourhoods until 5G is deemed safe for the general public.

The group succeeded in filing a report that mandates stakeholder communication and public consultations through a standing policy committee on innovation and economic development held June 13.

Although speakers at city hall quoted a mix of anecdotes and scientific studies, the group is not alone in their concern about 5G networks. Multiple cities in California have passed ordinances pausing network deployments. On a larger scale, 5G development was halted in Brussels, Belgium, because the radiation emitted by network antennas did not comply with the nation’s radiation standards.

The “problem” with 5G

Electromagnetic fields (EMFs) are generated when electric current flows; that is, every time an electronic device is turned on. EMFs generate radio frequencies (RFs) which are the basis for most wireless communication including radio, television broadcasts and wireless networks (Wi-Fi) among many others.

In our day-to-day lives, we are exposed to RFs of varying intensities through our electronic devices. Implementing a 5G network requires the installation of thousands of small cell towers, which means urban populations will constantly be exposed to RFs emitted by these installations.

Human exposure to certain RF intensities can result in heating of the skin. The use of RFs to heat biological tissue is the same principle by which microwave ovens heat food.

Some studies have examined the possibility of a link between RF exposure and cancer. The World Health Organization (WHO) has been studying the effects of RFs on human health since 1996 through the EMF Project. These and other studies have resulted in the creation of legislation dictating the RF intensity range to which humans can safely be exposed to — in Canada’s case, Safety Code 6.

The 5G Winnipeg Awareness group quotes several studies which have shown that serious health effects — such as cancer and DNA damage — can be caused by some RFs, including the ones employed by 5G. However, these RFs are currently considered safe by Health Canada’s Safety Code 6.

It is the current standing of a Canadian government health guide that “The scientific evidence does not support a link between exposure to radiofrequency EMF and cancer at the levels permitted by Canadian exposure guidelines.”

Friesen said the studies showing otherwise have failed to change Canadian laws because “Health Canada would then have to change its Safety Code 6 guidelines. In turn, innovation science and economic development, which has adopted these guidelines as their standard, would have to develop regulations and more protective compliance criteria. This would be inconvenient and costly to the wireless industry.”

Recent news have mentioned 5G thanks in part to conspiracy theories. In April 2020, social media content blaming 5G for the spread of COVID-19 led to more than 70 arson attacks on cell towers in the U.K.

“I do not advocate violence,” Friesen said. “Our group will pursue the peaceful means that our democracy provides for us […] To be clear, I do not believe that 5G causes nor spreads COVID-19.”

The Internet of Things, the new generation of internet-connected devices which has brought the like of smart homes, app-controlled coffee machines and wireless security cameras, requires a powerful network to enable it.

According to Canada’s Communications Research Centre website, “5G will be a game changer in wireless telecommunications, ushering in a network for future generations with more devices, faster communication and higher speeds.”