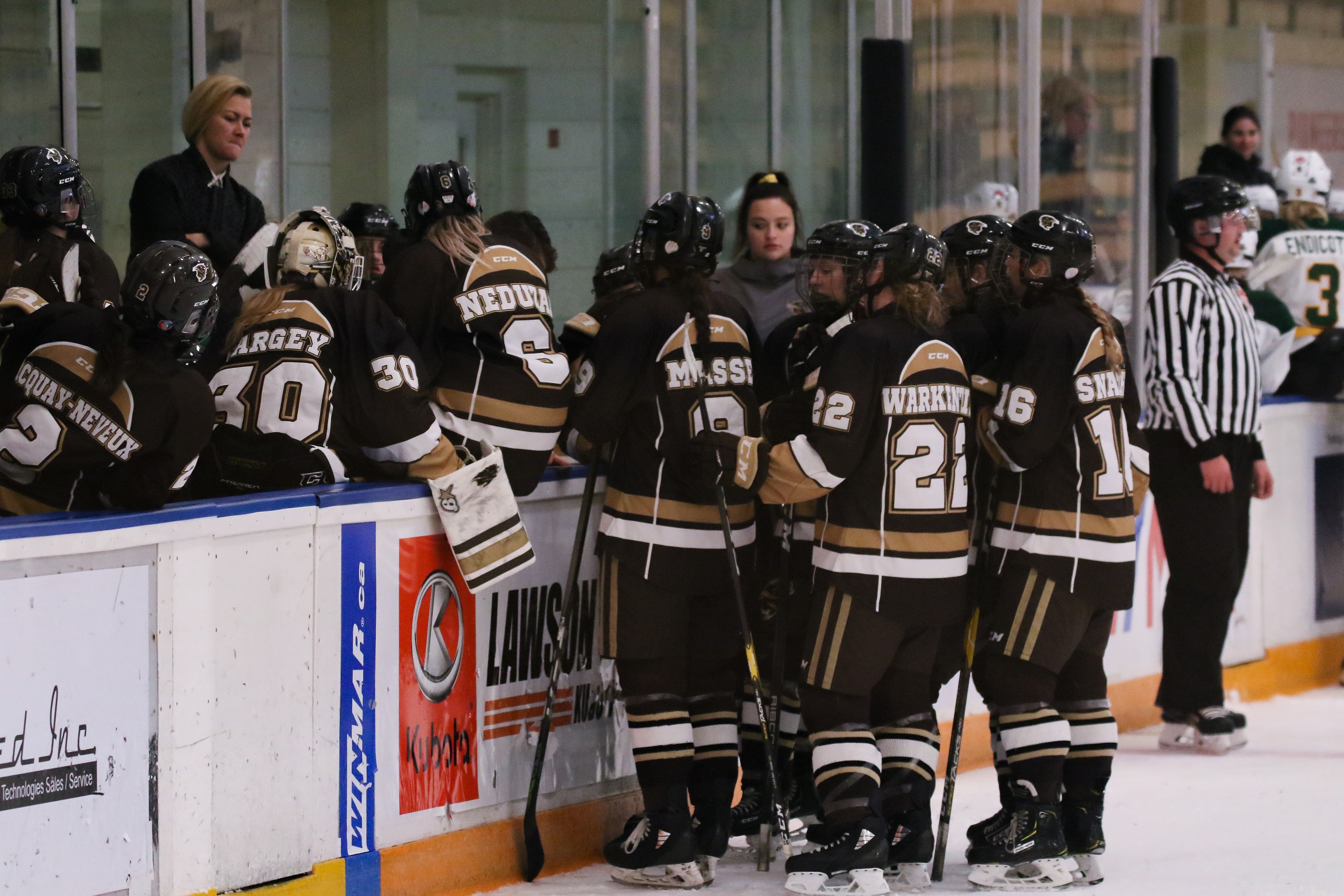 Analytics are a magical tool.

Not only do they give you a deeper and more nuanced view of what’s happening in your favourite sport, they also help you analyze a team’s play to see where the club is headed.

Puck luck and good goaltending can mask major deficiencies in hockey, but the underlying numbers help pull back that mask.

All season the argument has been the U of M Bisons women’s hockey team is doing all the things it needs to do right but is just not getting the bounces. However, against the University of British Columbia Thunderbirds there was room for improvement.

In the two-game series, the U of M finished with a 48.4 Corsi-for percentage, losing the possession battle by a hair statistically.

But if you drill down and compare the two games, the details begin to show.

In this context, shot attempts include all shots that hit the net, miss the net or are blocked. Acting as a proxy for possession, Corsi-for percentages — measured using shot attempts — show how much a team controls the puck by comparing how often they send shot toward the opposing net to how many they take on.

Quite simply, the Bisons stole the win on Friday and the underlying numbers prove it. Possession-wise, the herd was caved in, sporting a 37.6 Corsi-for percentage in the overtime victory.

UBC was able to send 53 shot attempts toward the Bisons goal, with 35 hitting the net, while the U of M got 14 shots through on 32 attempts. On raw shot attempts the worst period for this was the opening one, where the Bisons mustered just eight shot attempts while taking on 14.

The saving grace for the U of M in the first period was its zone exits in. With 16 controlled zone exits in the first, the Bisons did a good job of clearing the zone with possession heading down the ice, but this did not translate into zone entries.

The Bisons had just 10 controlled zone entries in the first, as the UBC did a great job of gumming up the neutral zone and forcing the puck back into the Bisons end of the ice. Once the U of M forecheckers hit the centre line they were met with a wall of Thunderbirds.

In the second, the Bisons could not get the puck out of the zone and faced 24 UBC shot attempts compared to 11 sent the other way.

Possession was fairly even the rest of the way with the Thunderbirds holding a slight edge through the third and overtime periods, but the Bisons were able to weather the storm and win off a Jordyn Zacharias goal in overtime.

Despite a massive possession lead, the Thunderbirds could not capitalize on the chances given to claim a win. While a lot of credit can be given to Erin Fargey in the Bisons crease, something must be said for UBC’s shooting.

Of all players on the UBC roster, just two have a shooting percentage in the double digits.

Leading scorer Hannah Clayton-Carroll is shooting at 14.3 per cent, while Tiffany Chiu is at 10 per cent and has scored twice.

Yes, UBC has struggled to score this season — the club has 32 goals in 2019-20 — but 37.6 per cent possession is not sustainable in the long run for the Bisons, especially against teams like the University of Alberta Pandas.

The Pandas are experienced and offensively gifted, leading the conference with 65 goals on the season. If you lose the possession battle to U of A, it means a lot of pucks in the back of your net.

The herd either needs to limit chances in its own end or start generating more in its opponents’. If it does not, winning games 1-0 in overtime will prove to be a tall order on a weekly basis.

Game two of the weekend is where you need to marry the analytics with the eye test.

The U of M won the possession battle with a 57.1 Corsi-for percentage, but it got a lot of help from the referees.

In the first it was UBC with the possession edge, with 25 shot attempts to 13 for the Bisons. The Thunderbirds kept the herd hemmed in its own end — evidenced by just nine controlled zone exits and eight controlled zone entries for the U of M — and was able to turn this possession into four goals.

It took UBC 58 shot attempts to score on the weekend, but it quickly turned that momentum into a wide gap the Bisons could not overcome.

Possession-wise the second period of Saturday’s game was the best the U of M had all weekend, with 21 shot attempts to just seven by UBC, but it was behind a bit of a smokescreen.

The Thunderbirds took three penalties starting with a Rylind MacKinnon slashing minor at 6:24. After a successful kill, Mackenzie Kordic was called for hooking and Hannah Koroll was called for interference.

The U of M turned these penalties into a pair of power-play markers to get on the board and swing the momentum back its way.

The U of M was not able to turn this into much zone time in the third, until another UBC penalty gave the Bisons an advantage.

With an edge in shot attempts at 26-13, and 12 controlled zone entries to six controlled zone exits, the Bisons did a good job at capitalizing on the odd-man situation, which continued late in the game as Kate Gregoire crashed the net to score while the Bisons net was empty.

Just as having negative possession is not good practice, having possession metrics ballooned by man advantages is not either. The Bisons relied heavily on being a player up to establish zone pressure and drive shots toward the UBC net.

While it resulted in three goals, it’s not the kind of hockey that makes for success against more disciplined opponents.

While possession metrics are a good judge of how particular games went for teams, their greatest strength comes when used to predict future outcomes.

Based on the past weekend the Bisons have struggled to generate chances toward the net and have also struggled to create controlled zone entries.

This is a skilled but young team currently struggling at 5-on-5, yet when playing in a power-play or 6-on-5 situation with more space and ice to work with, the herd truly shines.