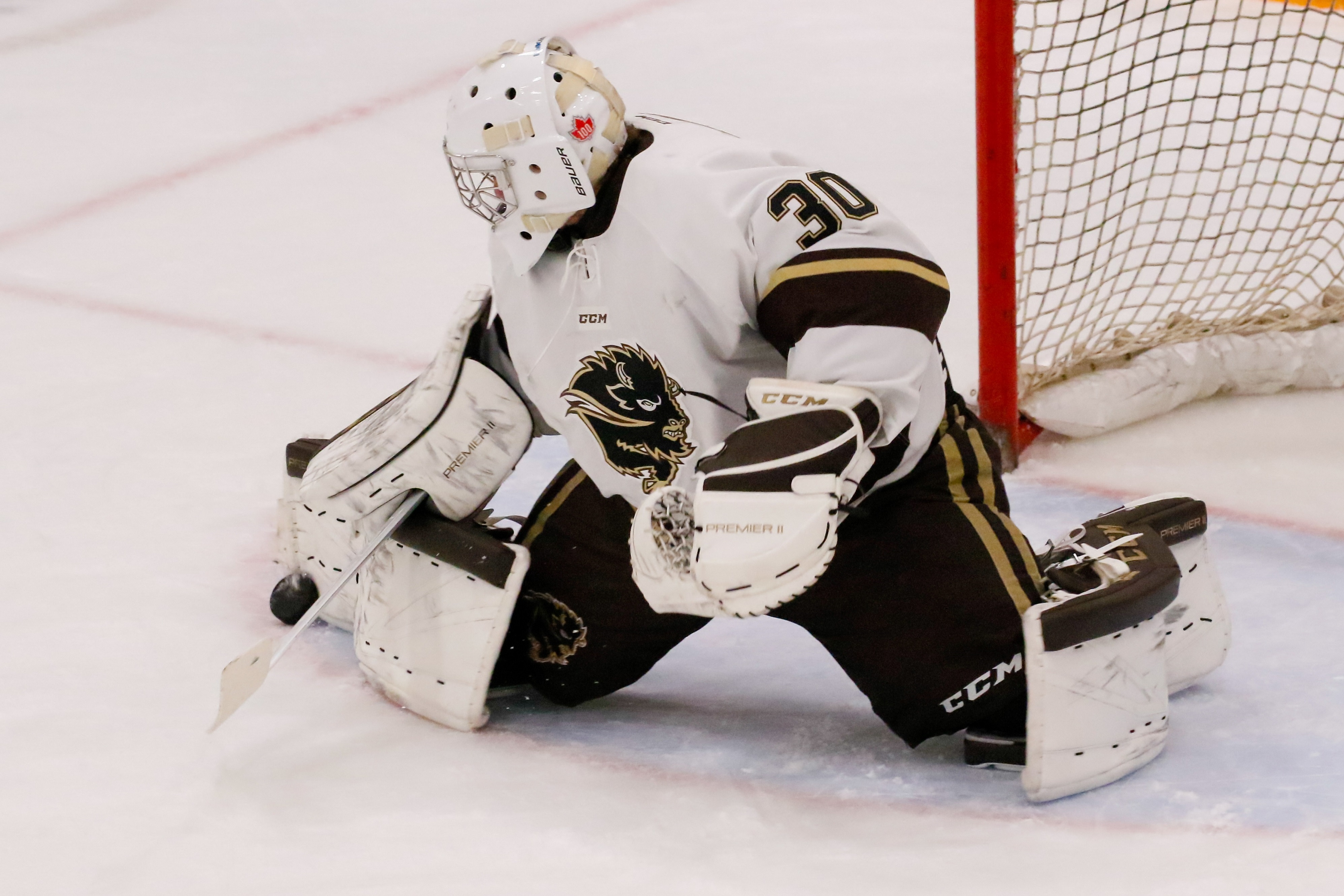 Bisons netminder Riley Lamb turns aside a shot during an Oct. 19 game against the University of Calgary Dinos

One of the best ways to show you belong in sports is by knocking off the top dog.

The U of M Bisons men’s hockey team did just that on the weekend against the Canada West leading University of Calgary Dinos. In a series where the club was outshot 99-26, it still managed to pull off a two-game split.

What was a special night for one Bisons player was a nightmare for the team as a whole Friday, as the herd was dominated in a 5-2 loss to the Calgary Dinos.

While Josh Tripp picked up his first Bisons goal, Manitoba was outshot heavily in the tilt, with netminder Riley Lamb being shelled by 50 Dinos shots. The third period was the worst, with the home side being outshot 25-1.

This did not prove to be an issue for Bisons coach Mike Sirant, who thought the lopsided shot total masked a quantity over quality approach.

“We’re not so concerned with how many shots are on the scoreboard, as long as we’re trying to keep it to the outside,” he said post-game.

“I know in the third period we gave Calgary too many quality shots and [Lamb] was really good in net, he really battled to the end there. We’ve got to eliminate the quality shots, and if we’re giving them some shots from the outside we can live with that.”

The Dinos conference-best offence took no time to get on the board with a goal by Coda Gordon just 1:12 into the game, but the Bisons rebounded quickly and came out of the opening frame ahead 2-1.

Tripp evened the score, picking up his first career U Sports goal off a clean passing play. Manitoba entered the Calgary zone, Dylan Thiessen sent the puck to Ben Dalke and he went cross-ice to a streaking Tripp.

Tripp snapped a shot top corner, blocker side on Matthew Greenfield, sending his water bottle flying to tie the game 1-1.

“It was awesome,” he said of the goal.

“To be honest [I] don’t know if I really aimed it, I just knew I had to put it on net and I got the water bottle so that made it feel a little bit better.”

Bisons forward Geordie Keane, got on the board 44 seconds later with a goal scored on the powerplay to give Manitoba the 2-1 lead. A Colton Veloso shot from the slot went in and out of Greenfield’s glove, right onto the stick of Keane and he rifled it home.

“Keane has been outstanding for us every game,” Sirant said.

“He’s a heart and soul player, he leaves it out there every game.”

The second period was all Calgary, as Kaden Elder picked up back-to-back markers to give the Dinos a 3-2 lead.

Elder’s first goal came after a strong individual effort by Matt Alfaro, fighting off a Bisons defender in the slot and getting two shots on Lamb. The Bisons keeper stopped both, but the second shot rebounded right to Elder and he made no mistake, tying the game 2-2.

He struck again late in the second period, sending a shot through a screen and five-hole on Lamb to give the Dinos a 3-2 lead entering the third period.

Mitch Cook scored to make it 4-2 Calgary early in the third, and Elder completed the hat trick late as the Dinos claimed a dominant 5-2 win.

A sense of déjà vu fell briefly over Wayne Fleming Arena Saturday, as it looked like a repeat of Friday’s result was on the way. Manitoba, though, flipped the script and came away with a 4-3 overtime win to split the weekend and hand Calgary its first loss of the season.

“We had a really good weekend last weekend in Mount Royal […] we went in there, played well and won a game. We felt that we could do that again here.”

Like Friday’s action, the opening frame was lopsided on the shot counter in favour of the Dinos, but it was Manitoba again escaping with the lead.

Jonah Wasylak broke into the Calgary zone and fed the puck to Jeremey Leipsic cutting toward the goal. Leipsic went right to left and tried to tuck the puck past Brodan Salmond in the Dinos goal, but was stopped.

The puck rebounded out to Keaton Jameson who snapped a shot home to give Manitoba a 1-0 lead in the first period.

The second frame again was all Calgary, starting with Alfaro tying the game 1-1 with a goal, followed closely by Graham Black getting the Dinos in front.

On the powerplay, Gordon sent a pass to Jordan Xavier and he found Black on the backdoor. Black snagged the puck and hammered it home for the 2-1 Dinos lead in the second.

Devon Skoleski scored early in the third to bring the Bisons even, but Logan Fisher responded for Calgary soon after to snag the lead back at 3-2. Then came captain Adam Henry with his biggest performance of the season.

Late in the final frame, Henry broke into the Calgary zone with Thiessen. Henry cut to the net and redirected a shot by Thiessen past Salmond to tie the game and send it to overtime.

Not content with just the goal, during the second overtime Henry entered the Dinos zone with speed on a 2-on-1 with Skoleski. The Calgary defender dropped to take the pass, but Henry got it through and Skoleski banged home the 4-3 game winner.

“He’s a leader on and off the ice and he’s a guy that can make things happen out there,” Sirant said.

“He showed today why he’s one of the elite players in U Sports.”

The Bisons now sit tied with the University of the Lethbridge Pronghorns for fourth in Canada West with six points on the season.

The Bisons will back in action Oct. 26 and 27, to host the University of British Columbia Thunderbirds. Game one begins at 7 p.m. CDT and game two at 2 p.m. CDT.