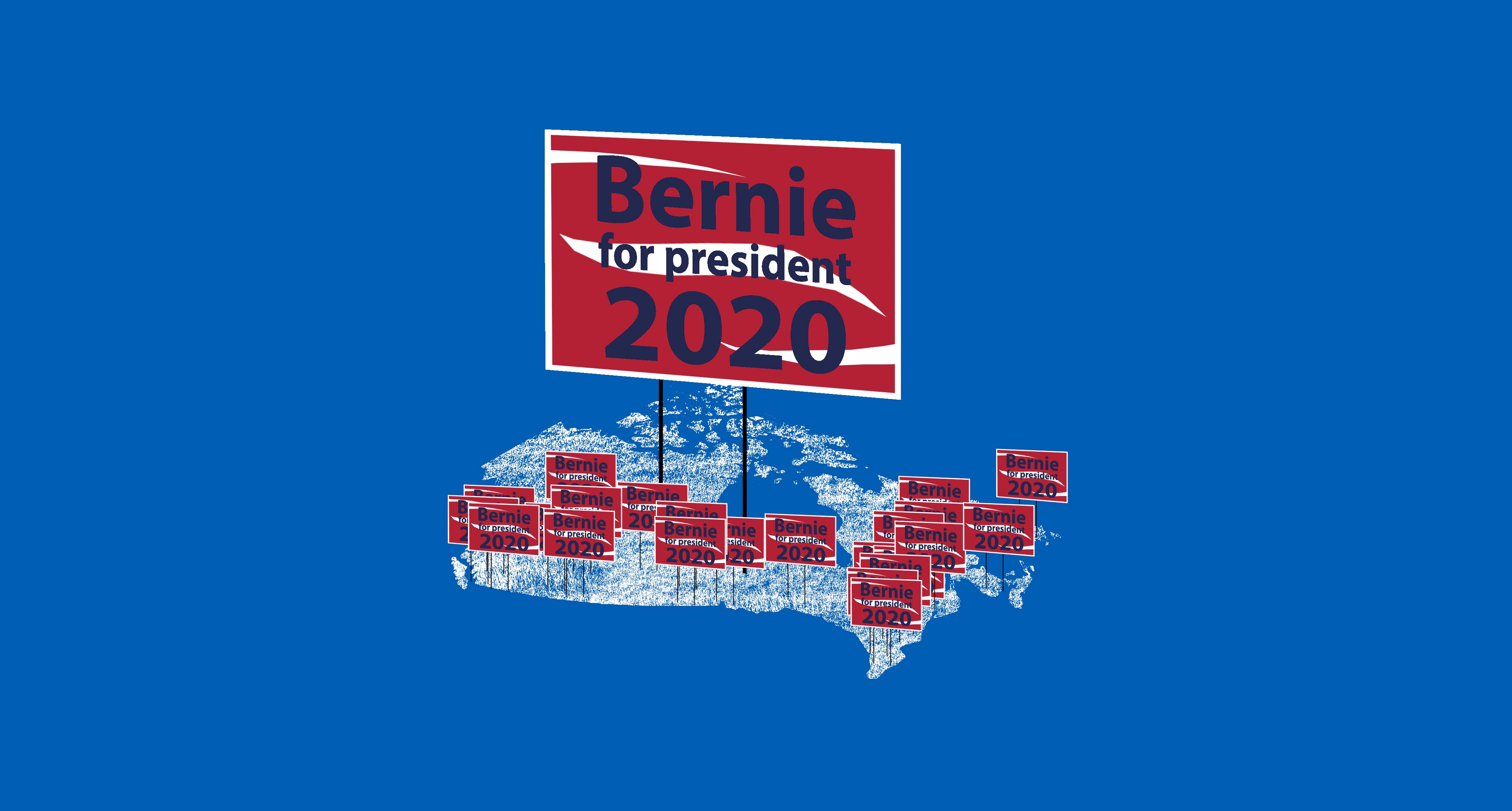 As the U.S. begins its two-year election cycle, it is important to think through how the leading Democrat in the presidential race just might reshape Canada if he wins.

United States senator Bernie Sanders recently announced that he would once again be running for president. Given the unprecedented success of his 2016 campaign and unmatched senate approval rating and support around the country — raising over US$6 million from 225,000 people within the first 24 hours of announcing — he is the frontrunner of the 2020 Democratic nominee process.

Couple this with the polling leading up to the 2016 election — with a private poll taken two days before the election showing that Sanders would have won a landslide victory of over 12 points over Trump, and other polls showing very similar results. In contrast, a combination of polls leading up to the election showed Clinton beating Trump by just three percentage points. It becomes abundantly clear who would win an election between Sanders and Trump.

So, what would a Sanders presidency look like for Canada? To fully understand what this may encompass, it is important to examine just how much influence the U.S. and its presidents have over Canada.

Just 18 years ago, Canada blindly followed George W. Bush and the U.S. into the illegal war in Afghanistan — the longest war in Canadian history — under the guise of “counter-terrorism.” And though Canada did not join the U.S. in their despicable invasion of Iraq, Canada did provide military and monetary aid to the U.S. mission once Iraq was destabilized.

In modern politics, U.S. influence is more obvious than ever. As part of President Trump’s new North American free trade deal, Trudeau made gigantic concessions on prescription drugs. Specifically, allowing multinational pharmaceutical companies, who are some of the most profitable in the world, to extend patents on drugs from eight to 10 years.

Big pharma spends the most of any industry to legally bribe American politicians via lobbying and offering lucrative jobs once the greased politician retires. As a result, the pharma industry in the U.S. has the biggest influence over pharma policy which has led to the highest drug prices among developed nations. Arguably, the ripple effect of U.S. policy has produced a more expensive bill on necessary medication for Canadians.

Even more, Trump has done more damage by colluding with Prime Minister Justin Trudeau on huge fossil fuel projects like the Keystone XL pipeline that had otherwise been considered dead under Obama.

A Sanders presidency would bring the U.S. out of a circle of reactionary politics and force Canada to follow suit.

The immediate priorities of a Sanders administration are clear: raising the minimum wage to US$15 an hour, providing universal healthcare to every citizen as a right, transforming the energy sector by prioritizing renewables and addressing the immoral state of income inequality — issues the senator has railed for his entire career. The ramifications of each of these in Canada could be huge.

For years, the U.S. has been creating trade deals with the expectation that its workers would be making the starvation wage of just US$7.25 per hour. Raising the federal minimum wage to US$15 an hour would give the country leverage in negotiating trade deals that benefit worker rights and prioritize living wages.

Ending the current inefficient private healthcare system and switching to a universal healthcare system could easily have a knock-on effect in Canada as well. As it stands, the U.S. does not play hardball with big pharma and insurance companies who prevent patients from receiving good quality healthcare. In fact, they do not even bother negotiating drug prices, leaving them with the highest cost for prescription drugs in the world.

While Canada is now being forced into trade deals where these immensely unethical practices are propped up, the opposite could be true. Canada and the U.S. could easily work together to not only stop these types of practices of ripping consumers off, but to lower drug prices and demand greater transparency within these companies.

Given the power of the Oval Office to use executive orders, on day one Sanders could block many existing plans to build fossil fuel projects. To Trudeau, this could mean an emotional goodbye to the Keystone XL pipeline.

Moreover, Sanders has been outspoken for decades against unnecessary U.S. imperialism and toppling of democratic governments. He said he would cut defence spending, citing how the U.S. spends more on its military than the next 10 nations combined.

More than just not getting the U.S. into any more offensive interventionism, Sanders would likely guide Canada and the entire international community into far less hawkish approaches to foreign policy. And more than any previous president, he would be far more likely to begin the withdrawal of troops from the countless illegal wars the U.S. has involved itself in.

But the most important reason of all is the flame that Sanders ignites in the people — especially youth — who hear him speak. He, seemingly more than any politician before him, manages to connect human emotion to clear issues which transcend borders.

And while Sanders is now 77 and will not be around forever, the flame he ignited will never die.

The flame he ignited in his 2016 campaign was obvious in Nikki Ashton’s 2017 NDP leadership run, is clear in his popularity in Canada, and shines in how he continues to inspire young people to get involved in progressive politics.

A Sanders presidency could not come at a more urgent time for both the U.S. and Canada, but it undoubtedly has the potential to lead both countries to a far more empathetic and prosperous future.