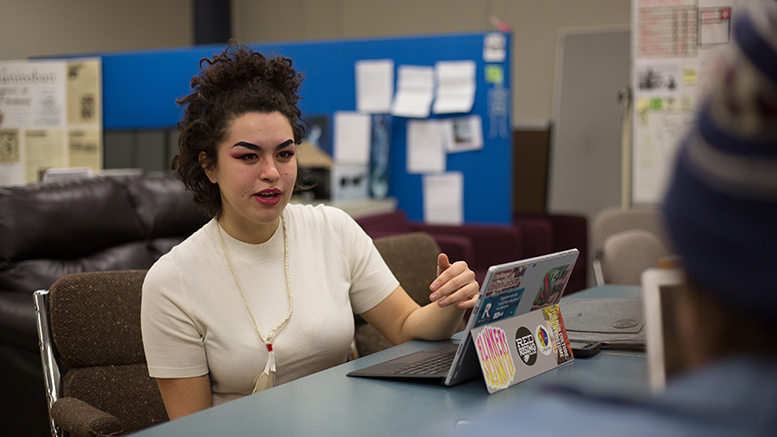 Annie Beach hopes to bring her long history of advocacy to UMSU as the presidential candidate for the Exist slate.

“Our main policies that we’re focusing on is striving toward accessible and affordable post-secondary education for local and international students, community engagement as to provide a safe space for cultural, social, religious and awareness student-run groups,” she said.

“Transparent and inclusive advocacy and lobbying at university, municipal, provincial and federal levels, and then ensuring that international students are represented and that their healthcare is prioritized, and as well black, Indigenous and people of colour [BIPOC] representation, inclusivity and celebration.”

Beach said she will also like to re-examine the current sponsorship relationships between UMSU and outside businesses.

“Looking at partnering with the various restaurants and coffee shops to get UMSU student discounts and deals,” she said. “Including local markets, local coffee shops and BIPOC and immigrant-run businesses.”

The Exist slate will also re-examine the current UMSU board of directors’ structure and create additional roles for marginalized communities beyond the current four positions of Indigenous, international, LGBTTQ* and womyn’s community representatives.

“Only two of these positions belong to Indigenous or visible minorities, which we feel does not reflect the nature of the population of the University of Manitoba and puts these representatives in a place where they feel tokenized or targeted,” she said.

The UMSU board of directors voted against affirming membership in the Canadian Federation of Students in November and recommended the union instead join the Canadian Alliance of Student Associations (CASA).

Beach said she will work to make sure students are aware of the provincial advocacy services the federation provides.

“There’s what’s happening with CASA, and the fact that they only lobby at a federal level as opposed to provincial, which tuition hikes and international student healthcare are the most pressing concerns right now and they’re both provincial jurisdictions,” she said.

Should UMSU’s membership come to a referendum, Beach said if they vote to remain within the federation, she will ensure the Canadian Federation of Students is visible on campus.

“I don’t want to make students think just because I’m involved with it, then I’m for it,” she said.

“So I think I would want to keep it up to students, but just make sure that they are aware of the benefits of the Canadian Federation of Students as opposed to only negatives that have been relayed to them. I want to make sure that they know both sides to the story.”