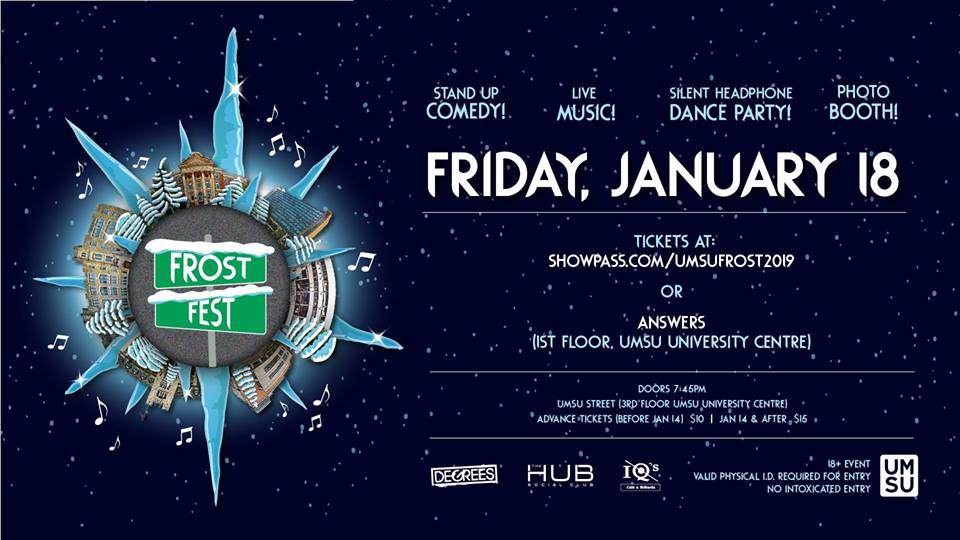 Students looking to party at UMSU’s fourth annual Frost Fest were left out in the cold last week after the event was cancelled.

According to a statement released by UMSU Jan. 16, the event — which was originally to be held across UMSU University Centre Jan. 19 — was cancelled due to what the union called “unforeseen circumstances.”

UMSU president Jakob Sanderson elaborated in an email, saying the event was called off in an attempt to limit potential losses.

“We had a primary act that was no longer able to perform at the event,” he said.

“With this matter, on top of lower than expected attendance and the frigid weather that we feel made people less likely to want to go out, we felt it was the prudent decision to cancel and recuperate some of our costs.”

Acts advertised included comedian Julian Rowan and a lineup including DJ Blitz and Jamil the DJ.

Other advertised features included a silent headphone dance party and a photo booth.

According to Sanderson, ticket sales were below UMSU’s expectations.

He said the union does not have finalized numbers on costs incurred.

“We knew taking over this year that the brands of Frosh and Frost Fest were damaged after huge losses and low attendance recently,” he said.

“We found a successful model for Frosh this year and hoped we could replicate that for Frost. Sadly, we didn’t have the same level of success.”

“At this point I think we have to look long and hard at whether or not Frost is a viable option for UMSU in the future,” he said.

“There are a number of fantastic events our faculty associations put on this same month and perhaps we’d be best served focusing on supporting those rather than put our energy into a competing event.”

Students who purchased a ticket online have already been issues refunds.

Tickets bought in person from Answers can be refunded by bringing the ticket to the UMSU office.