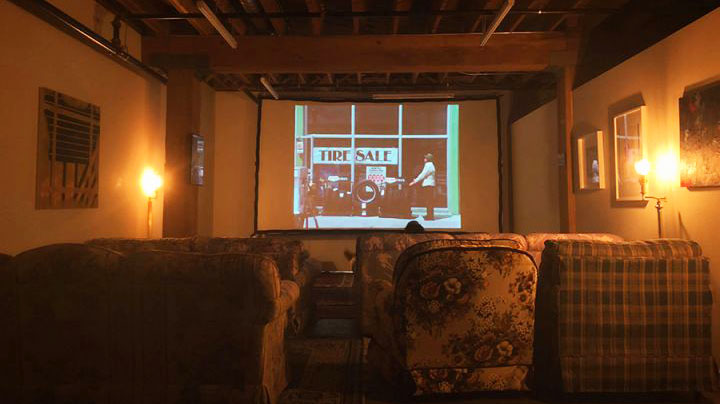 He is also one of the co-creators of the now-defunct pop-up movie theatre, the Laundry Room Theatre. Steel was the co-curator for the Laundry Room’s last Secret Cinema event Jan. 11, in collaboration with Cinematheque.

The Laundry Room was co-created by Steel and his colleague Matthew Schneider in 2018. Its prime directive was to screen local short films created by friends of the pair, with each showing punctuated by a secret feature film.

Like many independent film projects, the Laundry Room was borne out of the necessity for a filmmaker’s work to be seen.

After receiving a litany of rejections from various film festivals for their film The Birdwatcher, directed by Steel and produced by Schneider, they decided to take matters into their own hands.

Steel said the pop-up theatre was created as a means of uniting an often-overlooked demographic of filmmakers and film enthusiasts.

While many theatres and film festivals have rigorous selection criteria, the creators of the Laundry Room opted for a more casual approach to the process.

“I just picked films by people I knew and films that I liked,”said Steel.

The Laundry Room offered an opportunity for young filmmakers to screen their work for the first time.

“Everyone who had movies in the Laundry Room were all very young, all around my age, all around 20 years old, and I don’t think we think of ourselves as a film wave or film community that much, but I think the Laundry Room helps present these young peoples’ films as a cohesive community,” said Steel.

“I’ve always been really involved and wanted to support the film community here in Winnipeg […] but it felt like you couldn’t step on anyone’s toes, you had to make sure to involve the entire community,” Steel added.

In creating their own film group, Steel and Schneider were able to take the Laundry Room in their own direction.

Steel wanted the Laundry Room Theatre to be run “like it’s an indie rock club in New York in the early 2000s.”

He was inspired by the DIY indie rock spaces Lizzy Goodman describes in her book Meet Me in the Bathroom.

“Our goal was to have a movie theatre that felt like a mixture of a rural Manitoban grandma’s basement mixed with a ’70s arthouse cinema. Instead of chairs, we had couches we bought on Kijiji primarily,” said Steel.

“There [were] lamps in the theatre, and everyone had to turn lamps off before the movies […] It was about the atmosphere, we wanted it to be really comfortable and friendly.”

As for the future of the Laundry Room, Steel noted no plans are currently underway, and said the departure of co-creator Schneider was the nail in the coffin.

Nevertheless, he remained hopeful for the future of similar projects.

“I think the spirit of collaboration and showing the work of young filmmakers in Manitoba will never die,” Steel said.

“The future is open, the possibilities are open, there are still great films being made in Manitoba by young people that need to be seen.”

Hey there, it’s your future calling