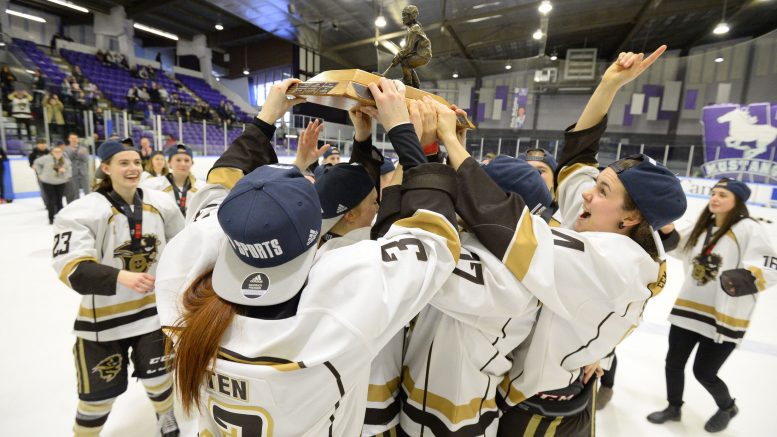 With the clock striking midnight on Dec. 31, the time has come for people around the world to make their resolutions.

What was a banner year for some U of M Bisons programs was less than stellar for others. No matter what side a particular program fell on, it bears reviewing what the big storylines were and what Bisons fans can expect in 2019.

Perhaps no Bisons program had a better year than the women’s hockey team.

The women finished the 2017-18 season with a 19-5-3-1 record — first in the conference — and were the top-ranked team in the country. After dispatching the University of Alberta Pandas in a three-game series, Manitoba swept the University of Saskatchewan Huskies to win the Catherwood Cup and book their ticket to nationals.

The herd shone again at national championship in London, Ont. A 4-0 win over the Queen’s University Gaels was followed by a tense 2-1 shootout win over the Concordia University Stingers.

In the finals, Manitoba easily beat the host University of Western Ontario Mustangs 2-0 to win the program’s first national championship.

So far in the 2018-19 season, the Bisons sit second in the conference at 10-3-2-1. Despite a tough sweep by the Pandas early in the season and a scrappy split with the Huskies, Manitoba looks poised to repeat.

Highlight: A fourth-place finish in the conference standings

What began as a year of hope became one many players on the Bisons men’s hockey team would like to forget.

Finishing the 2017-18 season in fourth place, the herd was confident heading into the playoffs. With home ice in a series against the Mount Royal University Cougars, the team looked poised to make noise in the postseason.

However this was not the case. The Cougars edged out the Bisons with 3-2 and 5-3 wins.

“This one stings,” Bisons head coach Mike Sirant said after the series. “This will sting for a while.”

Including the playoff series, the Bisons have lost six straight against teams named the Cougars.

For the men’s hockey team, the new year will be the time to hit the reset button. The club has gone 3-12-0-0-1-0 on the year so far, good for last in the conference. With its 3-1 victory over the University of Calgary Dinos on Dec. 1, Manitoba snapped a 12-game losing streak.

The team has a large crop of rookies finding their footing in the university game and plenty of injured veterans ready to return in the New Year. As for playoff hopes, all is not lost. The herd sits five points back of the University of Lethbridge Pronghorns for the final playoff spot.

Resolution: Get revenge on Mount Royal

Much like the men’s hockey team, the Bisons football team started the season with great promise. Despite dropping to 0-2 to start the year, the losses against the UBC Thunderbirds and Saskatchewan Huskies were tight.

The former saw a blocked Matt Riley punt returned for a touchdown and a late defensive stand by the Thunderbirds. The latter came down to a late interception by Saskatchewan’s Payton Hall, returned 90 yards for a touchdown.

Manitoba got its first wins of the year by beating the University of Alberta Golden Bears back-to-back for a 2-2 record. Had things in the opening two weeks gone differently, the herd easily could have been 4-0.

The next week was similarly hard-fought, as Manitoba dropped a 32-31 overtime decision to the University of Regina Rams. However all was not lost. During the bye week Regina was found to be playing an ineligible player and was forced to forfeit all wins, including the one over Manitoba.

This technicality gave the herd a 3-2 schedule coming out of the bye week.

“We would rather go out and outright win the game, but this is exactly what our team needed right now,” Bisons quarterback Des Catellier said at the time.

Despite this good fortune, the Bisons went on to lose the next three games. Evidence that something was wrong with Catellier became clear immediately, as the herd were dismantled by the Dinos and Huskies 34-16 and 27-4, respectively.

Catellier sat out the final game of the season — a 38-34 overtime loss to UBC — due to injury, and the Bisons entered the playoffs with a 3-5 record. Manitoba lost in the first round of the Hardy Cup playoffs to the 8-0 Dinos, 37-13.

Next season will see the return of Catellier, but the club will lose offensive stars Dylan Schrot and likely Jamel Lyles to the CFL draft. However, the herd still has the pieces to be competitive and solid recruiting in the offseason could push the team over the edge.

Resolution: Get back to the postseason

Highlight: A No. 3 national ranking

To understand the success of the Bisons swimming team, you only need to know one name: Kelsey Wog.

The swimmer has been a force since joining the herd in 2016 and 2018 was no exception. Wog snagged 14 gold medals in conference competition during the calendar year, helping the program to a third-place national ranking.

Wog began the year with three golds during the College’s Cup and followed that with two golds — plus a silver — during the U Sports national championship. She also snagged five gold medals and four meet records during the Odlum Brown Cup, and four golds at the Canada West Swim Championship.

Next up for Wog and the rest of the swim team will be the 2019 College’s Cup Mountain in Calgary, Feb. 2 to 3, followed by the U Sports national championship in Vancouver from Feb 21 to 23.